What is an alternator? Simply put, it’s a part of your car’s electrical system that you never really have to think about until it starts to cause you grief. Alongside your vehicle’s battery, the alternator is the backbone of the charging system in your automobile, and as such, it’s useful to understand how it works and the job it does for you during your daily commute. Your car needs electrical current to stay running, which means relying on more than just the battery. While the 12-volt battery under your hood is responsible for providing the juice needed to turn the starter, once the engine is running, it’s the alternator that takes over.

Many early automobiles relied on a simple magneto coil to provide spark to the ignition system and that was it. But eventually as accessories like lights, horns, and other electric devices were added it was obvious that they needed a source of electricity onboard. The solution was an engine driven DC generator. A DC generator is a simple machine that creates DC power directly. It may look like an alternator, but they two are quite different. A generator also weighs a lot more than an alternator and was usually physically larger. The interior components also wear differently, with a generator needing to be rebuilt more often than an alternator. Finally an alternator just puts out more power than an older generator, especially at lower engine speeds. So the generator went the way of the dinosaurs in the 1960s.

What Is an Alternator Made of?

Inside this small device is a rotor that spins at a high rate of speed thanks to a belt that’s connected to the car’s crankshaft. The rotor spins past stator windings inside the alternator to create an electromagnetic field. There are actually three separate coils of wire that that make up the stator, each one spaced 120-degrees from the other. The electricity created by the spinning of the rotor creates an alternating current (AC). That alternator current is then converted by the bridge rectifier using a set of diodes into direct electrical current. Depending on the alternator design the voltage regulator may be internal or mounted remotely. The voltage regulator does exactly what is sounds like, regulates the voltage output of the alternator. When the need for more power occurs, the voltage regulator can adjust to meet demand. Most voltage regulators are set to maintain 14.4 volts while the engine is running.

Most alternators make use of vented aluminum housings that help to dissipate the heat generated by its operation, but there are also water cooled alternators that utilize the engine cooling system. Water cooling helps helps when an engine compartment is cramped or if the output of the alternator is particularly high.

The 12-volt electric current produced by the alternator is used to keep the battery charged and to power all of a vehicle’s electric systems. This includes climate control, the radio, lights and the computerized brain that manages your engine. 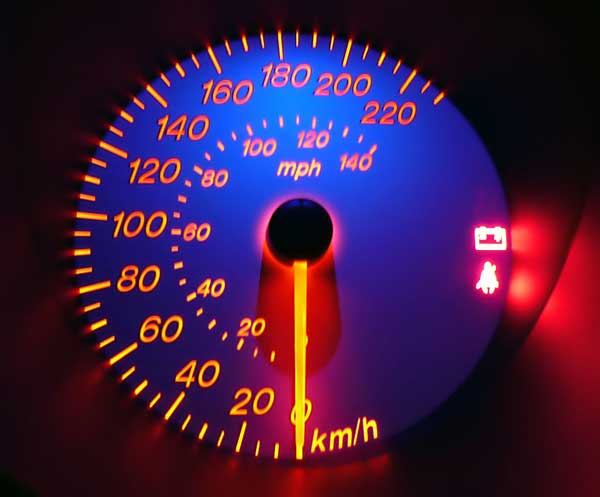 As you can see, the alternator is a critical piece of equipment. But how do you determine when it’s starting to wear out? Typical symptoms include flickering or fading interior and exterior lights, warning lights on the dash going on and off seemingly for no reason and a battery that won’t charge while the engine is idling. You could also have occasional stalling or a no-start condition. At its most extreme, a dying alternator won’t provide enough energy to keep your car running properly, so once your battery drains completely, your vehicle won’t be going anywhere.

An alternator can be tested on the car or off it. To test an alternator on the car you will need a volt meter. First with the engine off check the voltage at the battery terminals. It should read roughly 12 volts. Now start the engine and check the voltage at the battery terminals again. It should now read roughly 14.4 volts. You may have heard an old trick of removing the negative battery cable while the engine is running to verify if the alternator is working. DONT DO THAT! You could seriously damage some of the delicate components found in a modern car. Stick to the volt meter method. Testing an alternator off the car requires removing it and taking it to a location with a bench tester. The alternator will be clamped into the bench tester and wired up. Once connected the alternator will be spun up by the bench tested and checked for proper electrical output. If any test shows that your alternator is bad, then the only choice is a replacement or rebuild.

Fortunately, alternators are not an expensive component to replace, and because they are almost always located at the front of the engine itself, the replacement job itself isn’t difficult. In some cases it’s even possible to buy an alternator rebuild kit that will allow you to replace the worn out interior components while keeping the shell and much of the mechanism intact. When working on your alternator just remember to disconnect the positive and negative battery terminals to prevent a surprise shock.

As technology moves forward, so has the role of the alternator. In some cases the alternator has taken on the duty of also acting as a starter and an auxiliary motor. For example both RAM and Jeep offer the “eTorque” mild hybrid drivetrain option on their vehicles. This system uses the alternator to generate power not only for the vehicle, but also to charge an onboard hybrid battery pack. A dedicated sturdy drive belt connects the alternator (now called a motor/generator unit) to the crankshaft. When the engine needs a little extra help, the alternator switches into motor mode and uses the stored battery power to give a boost of mechanical power.

Check out all the electrical system products available on NAPA Online or trust one of our 17,000 NAPA AutoCare locations for routine maintenance and repairs. For more information on replacing your alternator, chat with a knowledgeable expert at your local NAPA AUTO PARTS store.

NAPA Know How Blog What Is an Alternator? A Practical Guide