If an electrically powered component in your vehicle suddenly stops working, it’s possible that some troubleshooting and a major repair may be in your future. But before you become too concerned, always remember to check the fuse.

The car fuse is the easiest part of the circuit to check, and many times when something on an electrical circuit stops working out of nowhere, the fuse is the culprit. Here we’ll talk about what a car fuse does and how to check whether one is still intact in your vehicle. 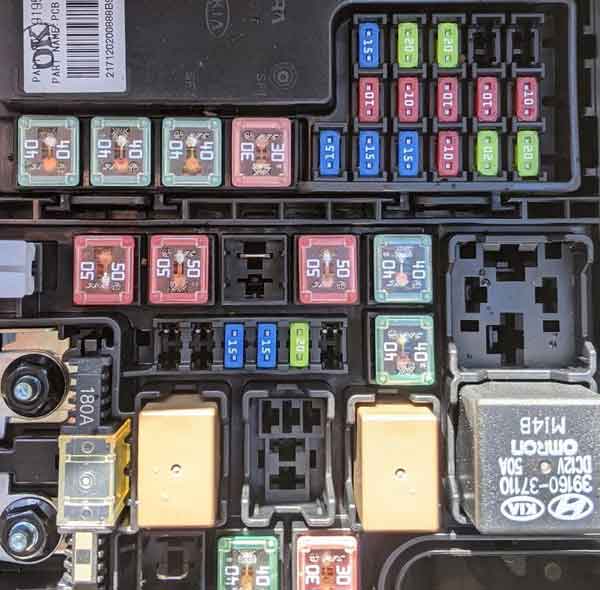 Fuses protect circuits by sacrificing themselves in the event that an electrical system becomes overloaded. Each electrical circuit in your vehicle is designed to handle a precise amount of current to support the components and functions it powers. This current may fluctuate a bit, but in the event of a short or something that causes a large or prolonged current draw, a dangerous situation can develop where the wires become so hot that they can melt and catch on fire.

Fuses are designed to burn out at a certain amperage, opening the circuit so the current is immediately stopped. Unfortunately, this also means that once the fuse is popped, it has to be replaced for the circuit and components to work properly again.

Testing a fuse is straightforward, but you have to know where to look. Make sure your vehicle is completely off. Consult your owner’s manual to find the fuse box location(s). The underside of the fuse box lid or the area around it will likely have a map identifying each fuse/circuit by name.

Use a fuse puller to remove the fuse, or work it out very carefully with a pair of needle-nose pliers. Stay away from simple test lights that connect to ground only and require power from the circuit to check current — these can damage sensitive circuits and even set off airbags. Instead, grab a digital multimeter, plug the black wire into the “comm” port and the red wire into the port with the omega symbol, and set the dial to the omega symbol, checking for ohms, or resistance.

Check that the meter works by touching the leads of the multimeter together. The reading should be “0” in theory, but different devices and wires may give a couple of ohms of resistance, depending on several different factors. Be sure to read the device’s manual to ensure you’re within spec. Once you’ve confirmed that your multimeter is working, hold one lead on each prong of the suspect fuse (or the metal end caps on a glass barrel fuse). The lead order doesn’t matter, so you can touch either lead to either side. If the reading is “OL,” the circuit is open, which means the fuse is blown and it must be replaced. If you get 0 or a number, your fuse is good.

Always replace a bad fuse with another one of the same size and amperage rating. If you select a fuse with too low of an amp rating, it will burn out again during normal operation. Go too high and the circuit won’t be protected — if the system becomes overloaded, the fuse won’t blow and open it up to cut off the flow of electricity. In this case, you risk frying bigger components or starting fires.

Never bypass a fuse with a metal conductor if your new properly rated fuses continue to blow. If this happens, you have a bigger problem that needs to be diagnosed.

Troubleshooting a bad fuse may sound complicated, but if you know what to look for and how to proceed, it’s really quite easy. It’s also an important skill to learn — after all, checking the fuses before tearing the engine apart could mean the difference between a few dollars and hundreds.

Check out all the ignition, electrical and lighting products available on NAPA Online, or trust one of our 17,000 NAPA AutoCare locations for routine maintenance and repairs. For more information on automotive fuses, chat with a knowledgeable expert at your local NAPA AUTO PARTS store.

NAPA Know How Blog How to Fix a Blown Car Fuse