Today, former NAPA AutoCare Center owner Phil Wilson owns Wilson Extreme Sports and the NAPA-sponsored Veteran Monster Truck, as well as several other businesses in the Denver, Colorado, area. Wilson’s relationship with NAPA started decades ago in a small agricultural community in Kansas where he grew up.

“NAPA was a staple where we lived,” he said. “I grew up using NAPA parts to fix my own cars. Years later, my love of automobiles and classic cars led me to open my own garage. That’s when I joined the NAPA AutoCare Center program. I went with what I knew and because NAPA has proven itself, standing the test of time.”

Wilson continued his relationship with NAPA in his venture with Wilson Extreme Sports. He uses 100% NAPA parts and supplies not only for The Veteran Monster truck, but also for the truck’s trailer and other company vehicles. 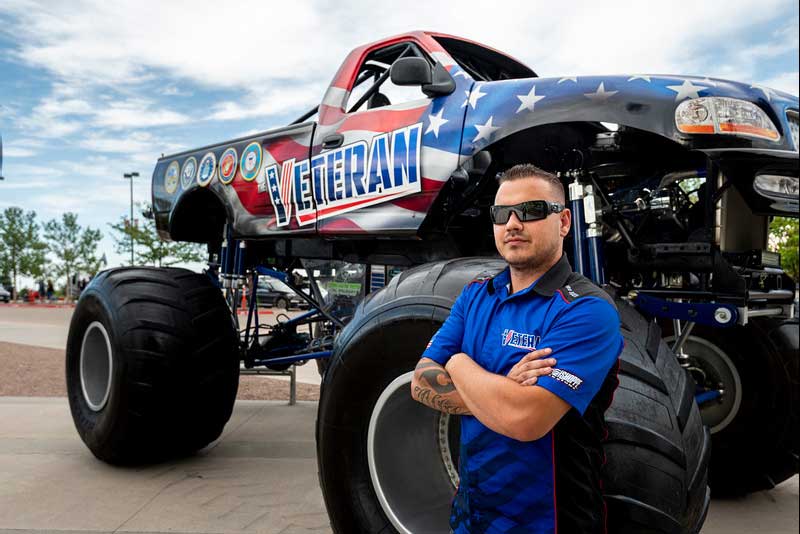 “I Want to Show Appreciation for our Veterans”

The Veteran is so named because of Wilson’s connection to and support of the nation’s military. He himself is a veteran. “I’m a veteran of the Gulf War,” he said. “I served in the United States Navy. My father is a former U.S Marine. And I want to show appreciation for our veterans.”

The Veteran was originally a show and display truck making appearances in parades and at special events, especially those honoring veterans. Wilson donates 15% of The Veteran truck’s merchandise sales to a variety of veterans’ causes including American Warrior Garage, Disabled American Veterans, and Hard Luck Auto, to name just a few.

Wilson said, “While there are other monster trucks dedicated to different branches of the military, The Veteran is the only one dedicated strictly to U.S. Veterans. We’ve actually had people stop and salute the truck.”

Look for The Veteran in the Coming Monster Truck Season 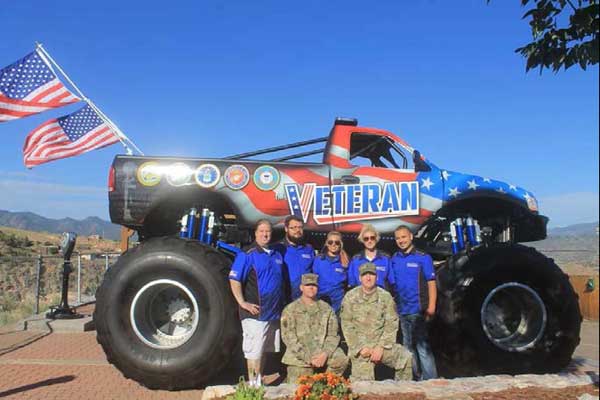 Wilson is looking forward to expanding The Veteran’s exposure through recent collaboration with Concussion Motorsports. The company was chosen to design and build a Veteran Monster Truck that will compete in the 2021/2022 season.

Wilson said, “Thanks to Concussion Motorsports’ design experience and superior knowledge, this race truck will use some of the most advanced and leading-edge concepts. Their design will advance us quickly with Monster Truck spectators and fans alike. We are looking forward to expanding our fan base and our overall mission of bringing awareness for our armed forces who sacrifice so much.

“In addition, we’d like to take our team back to the old school roots of monster trucks—motocross, tractor pulls, and mud-bogging events rather than the more dangerous freestyle stunts.”

Jeff Alire is the driver of The Veteran Monster Truck. His love of monster trucks began at an early age. About four years ago he started working on various monster trucks including, Quad Chaos, Dirt Crew, Stone Crusher, and most recently, The Veteran.

“I love our veterans and there is no better way to do that than piloting The Veteran at any event that we do,” said Alire. “It’s an absolute honor.”

NAPA Denver’s District Sales Manager Steve Baker works closely with Wilson. “What Phil does is a very neat thing for veterans and the response seeing what this means to our veterans is worth it!” he said. “NAPA Denver is proud to be a part of what The Veteran Truck does to bring awareness to veteran causes and honor the brave men and women who sacrifice so much to serve our great country.”