Rust is never a good thing. It’s the product of a chemical reaction between oxygen and metal (usually the iron in the steel parts of your car), and it compromises the integrity of your vehicle. Left unchecked, rust may eventually destroy it.

Your gas tank is particularly susceptible to rust, including on the inside where it may spread without your knowledge. But rust in the gas tank threatens not just the tank but also the health of the whole vehicle. Let’s look at how to get rust out of a gas tank as well as how to prevent it from recurring.

How Rust Impacts Your Vehicle

Rust particles in the gas tank may break free, travel into the fuel lines or injectors, and cause the engine to malfunction because there isn’t enough fuel to mix with air. Rust can also invade the fuel filter and hamper fuel flow. Poor acceleration may be a giveaway that you’re experiencing this issue, as reduced fuel flow makes your car sluggish. Eventually, rust debris may even damage your engine — manufacturers design their engines with tight tolerances, and anything but clean clean oil settling into the gaps will cause friction and wear, possibly leading to thousands of dollars in repairs.

Whether you’re restoring a classic car or maintaining your daily driver, examining the gas tank for rust and treating the problem will go a long way toward preserving the vehicle. 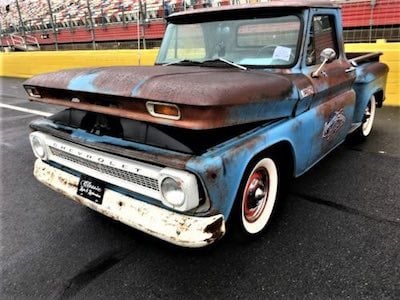 Before separating the gas tank from your vehicle for repair, you need to remove whatever fuel remains. Ideally, your tank will be close to empty when you’re removing the remaining fuel. Most fuel tanks have a plug on the bottom for draining fuel into a waiting receptacle, such as an oil pan. If there isn’t a plug, use a siphon hose to drain the fuel. Simply place one end of the hose into the tank filler and the other into the receptacle to drain it.

With your vehicle’s front wheels chocked, raise the vehicle as you would when changing a flat tire. Once it’s secured on jack stands, use a ratchet and socket to loosen the clamp on the fuel filter tube and vent tube, and then separate the hoses from the tank. Next, remove the straps holding the fuel tank in place, and then disconnect all remaining electrical connections. Finish by disconnecting the fuel lines, filler tubes and vent pipes before carefully lowering the tank to the ground.

3. Clean and patch or replace the tank

Use a hose to fill the gas tank with water. Swish the water around and then empty it to remove rust particles. You may need to repeat this several times until the water runs clean. Observe whether and where the tank leaks. If the holes are small, use a fuel tank repair kit to seal them up once the water and rust particles are removed and the tank is completely dry. After repairing, consider using a fuel tank flush to help prevent future corrosion.

If the holes are numerous or large, then the better choice is to replace the old tank with a new fuel tank — rust tends to spread one it takes hold, so this is the best way to ensure no debris from your gas tank pollutes your fuel.

Preventing Rust from the Start

With a repaired or new fuel tank, you’ll want to keep rust from forming again. Using a motor treatment product such as Sea Foam every 2,000 to 5,000 miles will help thwart rust. Moreover, the product cleans injectors and carburetor jets, stabilizes fuel, removes deposits, lubricates fuel, and serves as a de-icing and anti-galling agent all winter long.

Check out all the chemical products available on NAPA Online or trust one of our 17,000 NAPA AutoCare locations for routine maintenance and repairs. For more information on how to get rust out of a gas tank, chat with a knowledgeable expert at your local NAPA AUTO PARTS store.