Restrictions kill engine power. We already installed a K&N Blackhawk open-element air filter on our 2013 Chevrolet Suburban to let more air into the engine and make some extra power. Now we need to do the same on the backside. What goes in, must come out, so eliminating restrictions is usually a good idea. A free-flowing aftermarket exhaust kit will help get the spent gases out, and can actually help draw in more fuel and air into the engine through a process called scavenging.

All modern vehicles are required to have catalytic converters, which are illegal to remove (replacement with a similar cat is legal), so the majority of exhaust upgrade systems are called “cat-back”, because they replace everything behind the catalytic converter to the tailpipe. In the case of the Chevy Suburban, this includes two mufflers and the tailpipe. 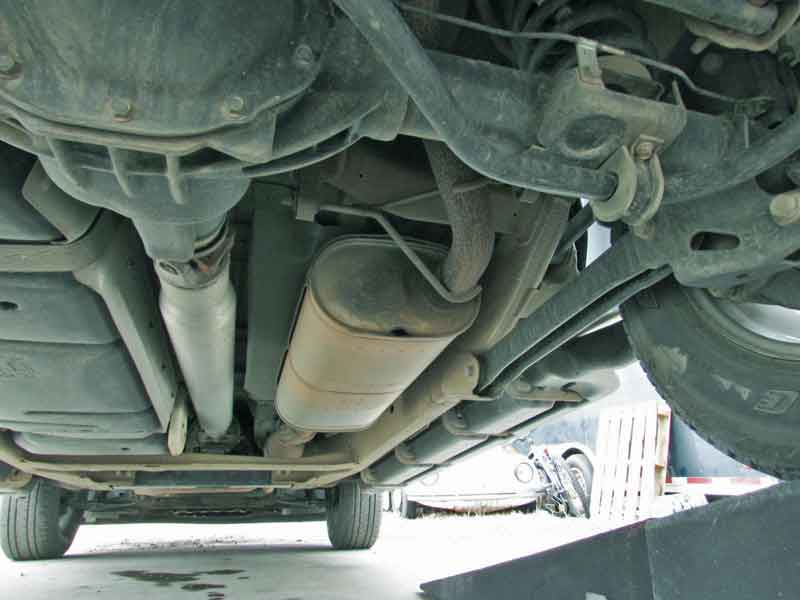 Not only will you gain performance with a free-flowing aftermarket exhaust kit, but you also get an increase in sound. This point can be a sticky one for some, as there is a nice, throaty tone, and then there is the raspy tone that tends to drone inside the car. Most people want to avoid the drone, and that is what the Magnaflow exhaust we installed does- it gave our 2013 5.3l Suburban LT a sweet, deep mellow tone without any droning inside the car. In fact, you can barely hear the improved exhaust note from inside the car, unless you are all in on the throttle, that is. Outside the car, the exhaust is just about perfect for the gearhead-driven late-model SUV. It certainly satisfies the need for a rumbly exhaust in your daily driver.

Swapping In An Aftermarket Exhaust Kit

The process is very simple. We wanted to show how the average DIY installer would go about installing this aftermarket exhaust kit. So instead of putting it on the lift in the shop, we did the entire install in the driveway.

Using some drive-on ramps there was plenty of room under the truck to get the job done. The only tools we needed were a reciprocating saw, 13mm & 15mm sockets, a slotted pry bar (not required, but helpful), a ratchet, cheater bar, cordless impact wrench (not required but helpful), and some spray lube. You could easily do this job without the impact, but if you have one it does make it go faster.

Removal of the old exhaust begins by cutting the pipe behind the muffler just before it goes up and over the rear axle. There is no other way to remove the pipe, it has to be cut. Using a reciprocating saw and at least a 6-inch metal cutting blade the pipe is severed in about 30 seconds. Make sure you know where the blade is going to be on the other side of the pipe, avoiding any lines or structure.

With the pipe cut the tailpipe section can be removed from the rubber isolator mounts. These are reused so don’t cut them. Instead spray a little lube on the end and press the hanger out of the rubber isolator. We used a split pry bar, which is actually an interior trim removal tool. Be careful not to let the pipe drop on your head or body when removing the hanger.

Next, move to the front of the muffler. There is a V-band clamp that wraps around the ball flange in front of the muffler. Use the 13mm socket and ratchet to loosen it. We had to soak ours in penetrating lube and use a cheater bar. Unfortunately, the factory design positions the hex at the top of the flange, otherwise we would have used the impact to break it loose. Once the clamp is loose, the muffler and remaining exhaust will drop a little. Try not to damage the hanger, it is reused.

There are two more hangers that have to be removed, use the same method as the tailpipe hanger. Don’t let the muffle drop on you, it is pretty heavy and could hurt.

We pulled all of the exhaust components out of the box and laid them out beside the car in order.

Starting at the front, we installed the new input pipe, with the original V-band clamp loosely tightened, just enough to hold the pipe in place on its own. There is an isolator hanger to support the end of the pipe.

Next, we slipped the muffler onto the input pipe. The end of the muffler with the split tube is the front (input) side. This goes over the new pipe you just installed. The supplied clamp has to be on the pipe before the muffler is installed.

The muffler outlet pipe was installed next. At this point you are fighting a heavy muffler and a piece of pipe. A helpful hand is nice to have, but you can get the job done by yourself too. The clamp was slipped over the output pipe, the pipe into the muffler and then the pipe was raised to the isolator rubbers and the hangers installed. You can try to hang the pipe first, but this makes slipping the muffler into place more difficult. We tried. Next, we tightened the clamps on the muffler just enough so that the muffler didn’t slide out.

The tailpipe is the last piece, it simply routes over the axle, and into the output pipe (don’t forget the clamp) and then the hanger is mounted into the factory isolator.

At this point, the exhaust is ready for the final adjustments and tightening. Each clamp gets 40-foot pounds of torque. Make sure the muffler is flat, not at an angle. This is for two reasons- looks, and ground clearance. If it is crooked, it could get hung up on something. Once the install is done, you need to check the clamps after 25-50 miles and retighten as necessary.

The end result of the install is a great sounding truck that has more power. The engine seems to rev quicker now too.  This is a quick easy way to shift your truck away from that wimpy stock exhaust to a smooth, mellow muscular grumble that all gearheads love.

Check out all the exhaust system parts available on NAPA Online or trust one of our 17,000 NAPA AutoCare locations for routine maintenance and repairs. For more information on installing an aftermarket exhaust kit, chat with a knowledgeable expert at your local NAPA AUTO PARTS store.