On December 9, 2022, the Glenwood Police Department busted a ‘chop shop’ in a suburb south of Chicago. They seized 128 stolen catalytic converters worth approximately $54,000. In the stash were several reciprocating saws, which are used by thieves to detach a catalytic converter in less than a minute.

To prevent catalytic converter theft, crime experts recommend parking your vehicle inside a secure garage or in a well-lit area. But that isn’t always possible, especially for work vehicles. Sure, an alarm system might help deter someone from quietly breaking into your vehicle for valuables, but a criminal ring willing to operate an electric reciprocating saw at night in a suburban neighborhood is most likely not scared away by an annoying alarm. 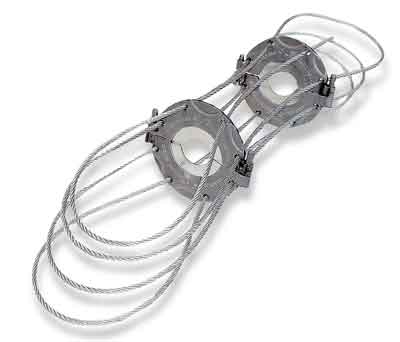 A catalytic converter is a metal device designed to reduce harmful emissions and gases, such as hydrocarbons, carbon monoxide and other air pollutants. On a standard combustion engine, this required part converts toxic fumes into safe gases through a chemical reaction. On the inside, catalytic converters are lined with tiny pores that are coated with platinum, rhodium or palladium. These precious metals are what makes a premium catalytic converter worth more than $1,000 on the black market at junk yards.

For the best catalytic converter theft protection, the NAPA experts recommend installing the CatClamp Catalytic Converter Lock. Built from heavy-duty metal wire, the cage of your CatClamp is unbreakable by design. Choose either the Standard Model with a 1-Year Warranty or the Stainless Steel MAXX Model with a Lifetime Warranty. Both versions are manufactured in the United States.

This easy-to-install catalytic converter theft deterrent product fits almost any gas-powered vehicle, including RVs. The durable metal rope can loop around your converter in as many as eight different points. Keep in mind, your CatClamp cables must route through a permanent (non-moving) component of your vehicle. While this catalytic converter anti-theft device can cost a couple hundred dollars, installing a replacement catalytic converter can cost thousands of dollars between the purchase of the part and the professional labor required.

Signs of a Stolen Catalytic Converter

Operating a vehicle with no catalytic converter also means hot, dangerous gas is released under your car, which heats up sensitive components and exposes passengers to carbon monoxide. That’s why many car owners place an anti-theft device for catalytic converters on each of their gas-powered vehicles.

Keep in mind, all-electric vehicles, which consume no gasoline or diesel and plug into electric sockets to replenish their batteries, are the only vehicles on the road today that do not have and do not need a catalytic converter. But for all other vehicles, including standard hybrids and plug-in hybrids, NAPA is your one-stop-shop for all the exhaust replacement parts you need, as well as upgrades to your fuel and emission systems.