What size are your vehicle’s tires? Don’t feel badly if you can’t answer that question even if you do go look. 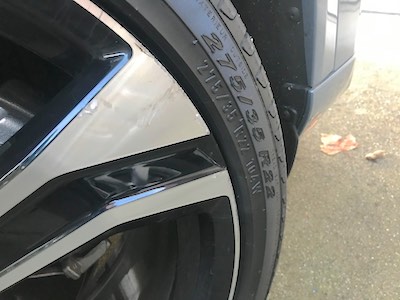 A tire’s size is located on the sidewall — the area between the wheel rim and where the tire touches the pavement. Look for a letter like “P” or two letters like “LT” and then a string of numbers and letters, and you’ve found it. What do all of those letters and numbers mean? Continue on to learn how to read tire size.

How to Read Tire Size

The tire’s size looks like a mathematical equation, doesn’t it? “Two hundred and seventy-five divided by 35 and R to the 22nd power.” But each part of it (apart from the slash, which is silent) describes a different aspect of the tire:

What About That Last Number and Letter?

The letter is a maximum speed rating. “S” and “T” are the most common for passenger cars like family sedans with maximum speeds of 112 and 118 mph, respectively. The tire above is a “W,” which means it’s rated for a maximum of 168 mph. Some speed ratings are even higher.

Choosing the right tire is important. A tire’s size, tread and age affect your vehicle’s appearance, ride quality, handling, performance in extreme weather conditions and fuel economy. Being able to read and decode those letters and numbers on a tire’s sidewall goes a long way toward making the right choice for your needs.

Check out all the tire and wheel accessories available on NAPA Online or trust one of our 17,000 NAPA AutoCare locations for routine maintenance and repairs. For more information on tires, chat with a knowledgeable expert at your local NAPA AUTO PARTS store.

NAPA Know How Blog How to Read Tire Size