If your car was built before the late 1980s, chances are the engine uses a carburetor to feed the air and fuel into the engine. Carburetors (or carbs) are complex components that perform several key functions when it comes to engine performance: air/fuel flow (throttle), air/fuel mix (atomization), fuel storage (fuel bowls), idle quality, and for vehicles with automatic transmissions, the carburetor can even manage the shift points through the linkage. While the last carbureted production vehicle rolled off the line in 1994 (an Isuzu Pickup for trivia fans) there are still countless vehicles roaming the roads with a carburetor mixing the fuel. Let’s take a look at what a carburetor does and how it does it. 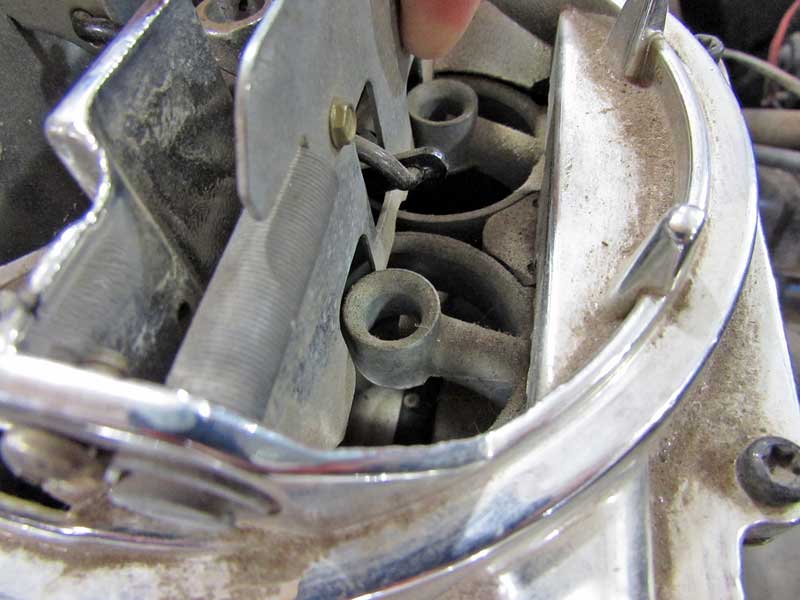 Next we will talk about how the carburetor controls the air/fuel mixture ratio. Also referred to as the AF ratio (AFR), this is the balance of air and fuel in the engine. Expressed as a ratio, for example 12 pounds of air combined with 1 pound of fuel is 12:1. Regardless of the engine’s design or performance, the ratios remain consistent.

AFR is controlled through three systems: idle, primary, and secondary. This is a function of how much fuel is delivered into the engine based on the flow of air.

For engine start up or bursts of power, the carburetor must store a small amount of fuel inside itself. Unlike a fuel-injection system, where the fuel is highly pressurized (40-65 psi), carbureted systems are typically set to pressurized the fuel to only 6-7 psi. Because the fuel is delivered under vacuum and not pressure (like EFI), having a small amount of fuel onboard is very important. Most carburetors hold a couple of ounces of fuel at all times. The level of fuel inside the bowls is adjusted through the needle and seat. When the fuel level dips below the set level, the weight of the fuel float opens the needle, fuel flow in through the port in the seat until the float rises, closing the needle. When the throttle is open abruptly, for passing, merging, or just for run, the extra fuel required is mechanically pumped through the carburetor via a spring and plunger system directly from the fuel bowls to the venturis.

In 4-barrel carburetors, the primary system is used until the throttle opens about 65%, at which point the secondary barrels begin to open. Both systems reach wide open throttle (WOT) at the same point, but carburetors with staggered bore sizes, such as the GM Quadrajet, have an effect called “crashing in”, where the secondaries are so much larger than the primary barrels, there is a point where the air and fuel flow makes a sudden jump. Equal-sized barrels eliminate this problem.

In most case, the stock carburetor is sufficient for the stock engine, but an aftermarket carburetor can help wake up a stock engine, and is usually required for performance applications. The key to choosing a new carburetor is matching the size of the engine to the size of the carburetor. Contrary to popular belief, most small V8s can only utilize about 600-650 CFM (cubic feet per minute) airflow without serious performance mods. Even though many small-block Chevy engines came with 750 or 850 Quadrajet carburetors, switching out to a square bore (equal barrels) of equal size can result in bogging and reduced fuel economy. For street engines, the right sized carburetor is usually a little smaller.

Eventually, all carburetors need rebuilding. Because they are submitted to air & fuel, dirt and varnish builds up inside them. When the metering systems get dirty, the performance of the carburetor is drastically affected. Maintaining clean air and fuel filters will extend the life of your carburetor (and engine). You can extend the life of an older carburetor with fuel treatments that clean the varnish from the inside. Regardless of the maintenance, eventually a rebuild is necessary.

In some cases, rebuilding the carburetor is not possible or economically feasible. Broken parts, hard to find gaskets, and complicated processes make rebuilds a gamble, particularly for less common vehicles. Replacement is the best option here. We recently went through the process with a 1965 Mercury Parklane with a 390 Ford FE V8 engine. The original carburetor was in need of a rebuild, but there were several broken pieces that are very hard to find. We also wanted to wake up the sleepy 390. An Edelbrock 600 CFM carburetor was selected and ordered from the local NAPA Auto Parts Store.

Installing a new carburetor requires a little bit of tweaking, but Edelbrock carburetors are very close to being perfect out of the box, that is one of the benefits of going this route. The design is very similar to the original carb, and was a bolt-on swap, no adapters needed (some applications require adapters, double check this with you local store).

After the new carburetor was installed, the 390 started much easier, with a smooth idle, and better off-idle performance. For less than the cost of having the old carburetor rebuilt, we have a new carburetor that functions better than the original and is easier to tune.

Check out all the fuel & emission system parts available on NAPA Online or trust one of our 17,000 NAPA AutoCare locations for routine maintenance and repairs. For more information on carburetors, chat with a knowledgeable expert at your local NAPA AUTO PARTS store.

NAPA Know How Blog Know How Notes: What is a Carburetor?