Unbeknownst to many, automatic belt tensioners are actually a wear item, and therefore cannot be classified as a prototypical hard part. Internal components in the tensioner can fail, causing stress on the belt and other accessory components. A tensioner is a relatively inexpensive part to replace, and can help protect other components such as the water pump, alternator, and A/C compressor from undue stress and premature failure.

How to Diagnose Tensioner Failure 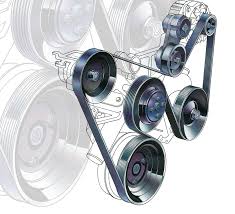 Undue belt/bearing noise and squeal: This condition can be caused by failure of the bearing in a pulley or by weak spring tension in the tensioner. Rotate pulleys to check bearing conditions. Belt squealing indicates insufficient tension on the belt. As a result, ensure the correct length belt is being used prior to replacing the tensioner.

Base and/or arm failure due to pivot bushing failure: The arm of the tensioner rotates on a pivot bushing inside the tensioner housing. This bushing can wear due to age or excessive arm vibration. A side-to-side motion indicates the bushing has failed, allowing the tensioner arm pulley to fall out of alignment with the belt, thereby causing belt tracking issues.

Excessive arm movement or bounce due to a worn damper: The damper moderates the action of the tensioner spring in much the same way that a shock absorber dampens a vehicle’s suspension. As the damper wears, the tensioner arm can bounce away from the belt, causing excessive belt slippage. This will in turn induce excessive heat into the belt, which will lead to premature belt failure.

It is important to note that any abnormal chattering or bouncing of the tensioner arm under normal operation indicates the tensioner has already failed and should be replaced. NAPA Belts/Hoses recommends inspecting the tensioner, and other serpentine system components, at 60,000 miles, and replacing worn components by 90,000 miles or as advised by the manufacturer. Moreover, NAPA Belts/Hoses provides the following recommendation for inspecting automatic belt tensioners:

With the engine off and cold rotate the tensioner arm through its entire range of motion. Any sticking or roughness indicates wear on the tensioner bearing surfaces and will require replacement of the tensioner.

Diminished output, along with premature failure of an alternator, water pump, A/C compressor, or other component in the serpentine drive system, may be an indication that the tensioner has failed and requires replacement.

Moreover, a major cause of alternator returns is pulley bearing failure due to excessive heat, vibration, or improper belt tension. Fluctuations in belt tension can be caused by excessive tensioner arm movement or bounce.

Ultimately, when it comes time to replace an alternator, air conditioning compressor, water pump, or other accessory, one should always inspect the belt tensioner to confirm that it did not cause the accessory component(s) to fail.

Tensioner replacement is no longer an option today!

Check out all the belts available on NAPA Online or trust one of our 17,000 NAPA AutoCare locations for routine maintenance and repairs. For more information on diagnosing engine drive belt tensioner failure, chat with a knowledgeable expert at your local NAPA AUTO PARTS store.