Snowmobile laws and regulations that govern how, when and where you can ride are decided at a state level, so it’s important to familiarize yourself with your state’s policies before you head out on an outdoor adventure.

The specifics will vary a little, but for the most part, states have adopted similar rules, according to the American Council of Snowmobile Associations. Before you speed off into a winter wonderland, make sure you consider the following high-level snowmobiling laws:

Believe it or not, most states don’t require you to have a driver’s license to operate a snowmobile. In fact, in many states, children as young as 10 are permitted to drive, as long as they are accompanied by an adult. What you will need, however, is registration.

Snowmobile registrations are a nominal fee that allow you to ride in predetermined areas for a few years. Younger drivers will likely need certification from a local or online safety course, and in some states, drivers must carry nominal liability insurance, as well.

Since machine maintenance is important to all parties involved, most states dictate that snowmobiles must be in good working order. State laws often focus specifically on brakes, specifying a maximum stopping distance at a certain speed — for instance, it should take you no more than 40 feet to stop at 20 mph (Pennsylvania).

Illumination is another important consideration. You’ll need bright headlights and taillights that remain on day or night regardless of where you are, and most states recommend additional reflective gear and decals.

Helmets are almost always required, and most states make additional “strong recommendations” to wear protective clothing and carry an emergency kit, even if the law doesn’t specify it.

Also worth mentioning is the fact that many states have noise pollution laws that pertain to snowmobiles directly, such as no more than 78 decibels at 50 feet in Michigan. You are enjoying the glory of nature, after all. 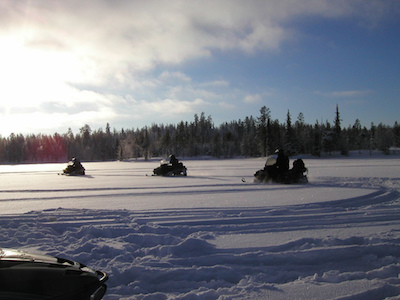 Snowmobile trails are usually clearly marked on state forest and park lands, but you should always exercise caution where there might be bodies of water, or in areas deemed “shared use” with automobiles. There are very specific laws for crossing public roads and highways, such as coming to a complete stop before crossing and yielding right-of-way to oncoming traffic. On the other hand, snowmobiling on private land is contingent on the owner’s permission.

Of course, operating any vehicle — recreational or not — under the influence of drugs or alcohol is strictly prohibited everywhere.

“Speeding” on a snowmobile is a poorly defined concept. Some trails may have posted maximum speeds, but for the most part, laws that govern speed do so generally, defining the limits in terms such as “reasonable and prudent speed for the existing conditions” (Maine). In other words, use your best judgment.

It’s always best to know the particular snowmobile laws and regulations of the state you’ll be riding in. If you’re planning a trip or outing, start by looking up these common guidelines and go from there. Regardless of where you’re snowmobiling, be safe, and enjoy the snow while it lasts.

Check out all the snowmobile and powersport parts available on NAPA Online or trust one of our 17,000 NAPA AutoCare locations for routine maintenance and repairs. For more information on snowmobile laws, chat with a knowledgeable expert at your local NAPA AUTO PARTS store.

NAPA Know How Blog Know The Rules! Are Snowmobile Laws the Same Everywhere?