It’s a hot summer day; the grass is long, and it’s time to mow. You put fresh fuel in your trusty mower and nothing happens. You pull the cord over and over, but your lawn mower won’t start. What now? As long as you’re able to pull the cord and the engine just won’t turn over, it’s most likely something simple. Here are a few things to check to help get that mower fired up.

Fire in the Hole

Nine times out of 10 in a mower that won’t start, the issue is as simple as a fouled spark plug. Over time, as your engine runs, it leaves deposits on the spark plug, coating it in burnt fuel, oil and exhaust soot. Remove the spark plug wire and the plug itself for inspection – and also to prevent accidental starting while you’re investigating what’s happening. If the spark plug is all black, then it’s time to replace it. Be sure to buy the same size plug and set the gap to the correct specification. Most mowers use a 0.025″ gap on the spark plug, which you can measure and set with a gap tool. You may be tempted to just clean the old spark plug, but that may only prolong your problems if the plug is worn out. Considering the life of a mower plug is roughly only about 50 hours of use, a new plug is cheap insurance. 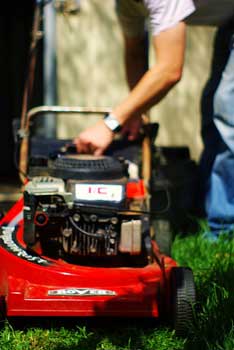 If the plug is clean or you’ve replaced it and the mower still won’t start, the issue could be a lack of fuel. Either the carburetor is dirty and not able to mist the fuel to be mixed with incoming air, or no gas is getting to it to begin with. Start by checking the fuel line to make sure it’s not shut off and that fuel is getting to the carburetor. If there’s fuel, then the bowl and mechanism themselves may be fouled and in need of a cleaning. Block off the fuel line and remove the carburetor bowl (usually only a single bolt) and give it a good cleaning inside. Over time water and crud can gum up the bottom of the bowl and cause issues. Once the bowl is clean put it back on and unblock the fuel line. Next remove the air filter and spray a little carb cleaner in to see if that helps. If it doesn’t, you may need to take the mower for a cleaning and tune-up.

Once you’ve determined that the engine has a spark and is getting fuel, you’ll want to take a look at the air filter. Along with gas, the carburetor needs to be able to get the proper amount of air to create a mixture the engine can run on. If the air filter is old, it’s most likely clogged up with dust and even leaves, and will need to be replaced with a new one. Don’t just knock the filter on the driveway or blow it out with an air hose, it needs to be replaced. This is as simple as removing the old one, installing the fresh one, and reinstalling the dust cover that helps protect it.

At this point, the engine should start. If for some reason it doesn’t, the reason could be a handful of more technical issues – one of which is carb needle adjustments. The needles shouldn’t need to be adjusted much, but over time they can move out of their setting. In this case, you’ll need a shop to adjust them for you. One other thing it might be is an oil sensor. Newer engines sometimes have a sensor that detects when motor oil levels are too low, and will cut out the ignition to protect the internal parts.

Sometimes when your lawn mower won’t start, the issue can be as simple as a filter or a plug. In some cases, however, it may be more involved. If your mower isn’t starting, investigate the basics of what makes it work — spark, fuel and air — and see if you can fix the problem yourself before calling a repair shop.

Check out all the lawn & garden products available on NAPA Online or trust one of our 17,000 NAPA AutoCare locations for routine maintenance and repairs. For more information on lawn mowers chat with a knowledgeable expert at your local NAPA AUTO PARTS store.