Lowrider cars have been a source of fascination for gearheads since they first appeared on the California scene in the late 1950s. The product of Mexican-American creativity and Detroit’s golden age of full-size sedans and coupes, the first lowrider cars spawned a culture that slowly spread across the United States and eventually achieved nearly global recognition on the custom auto scene.

How did the lowrider phenomenon get so big so quickly? It’s a story that sheds light on California’s influence on car culture and the people who made the transformation possible.

The Early Days of Lowriders

Lowering a car’s suspension wasn’t a new concept in the 1950s, but young Hispanic adults in California added a new dimension to dropped Detroit metal by introducing hydraulics into the equation. Using these systems, which were often borrowed from aircraft, hot rodders could raise, bounce and slam their cars at the touch of a button. The smooth, clean look of lowrider cars was also a reaction to the over-the-top custom scene that would come to the forefront in the 1960s.

Opening The Doors to Mainstream Culture 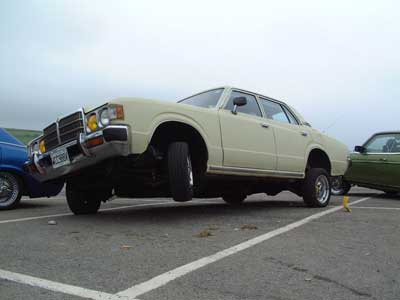 By 1970, it was clear that lowrider cars had left their niche in the Mexican-American community and spread out into pop culture, with songs like War’s “Low Rider,” and various movies focusing on these automobiles. It was at this point that the typical lowrider design began to mix with other influences, creating a more global presence for the movement outside its Los Angeles, California headquarters.

Some communities viewed lowriders as a threat, but mostly just in the same way that rock and roll was once blamed for juvenile delinquency. After a few years of bylaws banning hydraulics and lowrider vilification by the media, the cloud of skepticism was lifted and the movement found its place in the fabric of American life.

Modern lowriders have benefited from decades of technological innovation, and there are now a wide array of options for enthusiasts. No longer limited to American cars, lowrider culture now has offshoots including diverse elements like “stance” cars, where drivers swap hydraulics for air suspensions, as well as European fans who drop Volkswagens and BMWs and the Japanese VIP movement with its heavy metal scrapers and bulging tires. Hip hop culture has also embraced lowriders, but don’t worry, there are still plenty of traditional bubbles and boxes rolling down the boulevard, keeping the past alive today.

Check out all the maintenance parts available on NAPA Online or trust one of our 17,000 NAPA AutoCare locations for routine maintenance and repairs. For more information on lowrider cars, chat with a knowledgeable expert at your local NAPA AUTO PARTS store.