An MRI confirmed that Truex Jr. suffered a scaphoid fracture of his wrist in Saturday night’s Bristol crash. He will race with a cast as he seeks a berth in the Chase for the Sprint Cup. 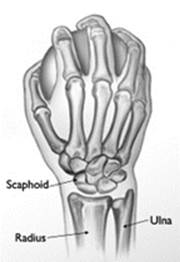 Doctors fitted Truex with a special cast Tuesday he’ll wear indefinitely. The cast enables him to better grip the steering wheel and compete in Sunday’s NASCAR Sprint Cup race at Atlanta Motor Speedway as well as the 11 remaining races. The NAPA Auto Parts driver posted a photo of his wrist in the cast on Twitter.

Truex worked closely with NASCAR this week and has been cleared to race.

The multi-car Bristol crash collected Truex on lap 448 Saturday sending the NAPA AUTO PARTS Toyota into the outside wall. Truex was treated in the medical center Saturday. MWR has yet to determine if a stand-by driver is needed for this weekend.

Truex is 14th in the points and holds the first of two wildcard entries as he seeks his second consecutive berth in NASCAR’s Chase the for Sprint Cup.