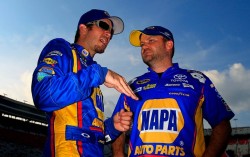 The Michael Waltrip Racing driver qualified ninth and raced against his 21-year-old brother, Ryan Truex, who qualified for his first Cup race of his career.

Truex led two laps in the 500-lap event to allow the NAPA KNOW HOW team to earn a valuable bonus point. He also ran consistently in the top 10 throughout much of the race.

However, with less than 55 laps to go, Truex was collected in a multi-car crash at Bristol involving Denny Hamlin, Ryan Newman, Brad Keselowski, and Kevin Harvick as well as with three other drivers. The NAPA KNOW HOW crew worked to make repairs, but the team was unable to return to the racetrack. 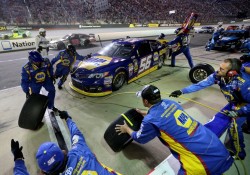 “I’m doing fine, just disappointed,” said Truex after the crash. “Honestly, I didn’t see anything. They just started jamming up and I tried to follow the 29 (Kevin Harvick) through. We got smashed into the fence a couple times. It’s just frustrating. We had a great NAPA Toyota all night long. We ran towards the front all night, but just didn’t have enough gas to make it to the end and had to pit. Once you get in the back towards the end, they start wrecking and you’re an innocent victim. I’m just frustrated right now because we had a good car and we didn’t deserve that tonight.”

Truex is now 14th in the point standings, but holds the first provisional wild card position with just two races remaining before the start of the 10-race Chase for the Sprint Cup.

The NAPA team returns to action Sunday at one of Truex’s favorite tracks and home of sponsor NAPA AUTO PARTS, the Atlanta Motor Speedway.