Since the dawn of time, humans have found it vital to their existence to measure things. In the U.S. today, we have two official systems: standard and metric. This can make things a bit confusing, but we still hesitate to go full metric with the rest of the world. So what’s the story with metric vs. standard? Well, kind of a long one.

A Story in Two Measures

The U.S. originally adapted its Customary Units from the British Imperial System. In the automotive world, the Society of Automotive Engineers established the SAE system commonly used today. But in the late 1790s, France began developing a system that would be measured in perfect units of 10, making calculations and conversions much simpler. This was the Metric System, and over time most of the world adopted it. There are economic reasons the U.S. has held back, but it’s strange, especially in a global economy where one system is used as an international standard. 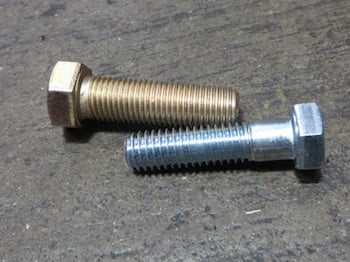 Metric and SAE fasteners are measured differently and with different vocabulary. SAE nuts, bolts and screws are measured by their thread count, or TPI (threads per inch) and their length. Metric fasteners are measured by length and pitch, or the distance between threads. So the systems are opposite in a way: The higher the TPI in a standard bolt, the finer the threads because there’s more squeezed into a set space. The greater the pitch on metric fasteners, the more distance between threads. There are actually up to four pitch options in the metric system, depending on the application. The nice thing about metric threads is that they easily translate to distance. Measured in millimeters, one complete turn of a fastener moves it the exact distance of the pitch — much easier for engineers to manage in the design process.

Experienced mechanics who handle both types of fasteners regularly may be able to tell the difference between a metric or SAE bolt by looking at it, but since most threads are very small, the difference is subtle. And there are consequences to getting it wrong. Forcing a metric bolt into an SAE nut will strip one or both and compromise the integrity of the connection, possibly cause leaks depending on the application, and make some repairs infinitely more complicated. Likewise, using a SAE wrench to tighten down a metric bolt can round out the head and turn into a big problem very quickly.

As a general rule, never force a fastener into place as you risk cross-threading, and always confirm you are working with the right toolset for the project. Some fasteners are stamped with specifications, but your best bet is to use new hardware from a marked container. It’s basically a guarantee that if you’re working on a Japanese, Korean or German car, you’re looking at metric. In the past, most U.S.-based manufacturers used SAE, but modern vehicles with parts made in different countries are beginning to go metric as well, so always check your owner’s manual.

There are thread gauges available, either cast in plastic or even printable that can be useful in identifying threads at home. When tiny differences can quickly create a world of trouble, it is extremely important to know what you’re dealing with.

Check out all the tools & equipment available on NAPA Online or trust one of our 17,000 NAPA AutoCare locations for routine maintenance and repairs. For more information on metric vs. standard, chat with a knowledgeable expert at your local NAPA AUTO PARTS store.