Old-timers may miss the days of teenagers popping hoods and turning wrenches in driveways and garages across America. The idea does seem quaint and distant, considering the complexity of modern automobiles and young people’s interest in computers and technology. But students still learn to diagnose and repair cars in high school auto tech programs in all fifty states, although now they’re as likely to have a scan tool in hand as they are a wrench or ratchet. 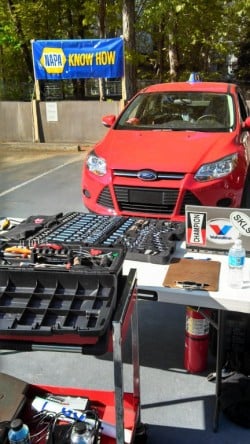 Contributing to youth involvement in auto service is the AAA Student Auto Skills Competition, a series of written and hands-on tests to find the best young auto technicians in the country. It starts with a written exam that any auto tech student can take. The top performers from each state – usually ten teams – compete for prizes like tools and scholarships, plus a chance to go to the national competition at Ford Motor Company’s headquarters in Dearborn, Michigan.

NAPA is a Platinum sponsor of the competition and recently hosted the Georgia competition at its Atlanta headquarters. We caught up with the ten two-student teams just before the hands-on test. That’s when students diagnose and repair Ford Focus sedans, each one “bugged” with identical problems. Students nervously rocked on their feet as the organizers explained the rules.

“Take your time and have fun,” suggested Keith Draper, a manager for the competition. “You don’t have to win. You already have. Put this on your resume.”

A horn signaled a Le Mans-style start, sending the teams running for their assigned vehicles and tables covered in tools. Within seconds, teams were aware of the first bug: a malfunctioning hood release. Students needed to repair that first just to access any potential issues inside the engine compartment.

While the teams applied their knowledge and experience to the vehicles, we spoke to their parents and instructors, who reinforced that each of these competitors is already a winner. One parent – a heavy equipment mechanic – told of his involvement with the competition decades ago.

John Smith and his teammate won the state competition in Georgia back in 1988 and went on to the national finals. He didn’t win in Dearborn, but said he’s never had to look for a job as a mechanic. Smith said that, thanks to his achievements as a student, he has consistently been recruited by employers since he started working.

As we chatted, we heard an engine crank up in one of the bugged Fords. One team began driving their vehicle to the judge’s area. The crowd applauded.

It’s not enough to just be the first to finish. Teams also need a “perfect” car, and this team’s vehicle still had one fault: a blown taillight bulb. 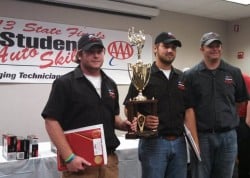 Minutes later, the second team to finish pulled their vehicle up for the judges, who promptly reported the results. Austin Reed and Clay Blasingame from Thomson High School achieved a win. Every bug on the team’s car was repaired flawlessly. Reed and Blasingame not only won $20,000 in prizes and scholarships but also a trip to Dearborn for the national finals with their instructor, Jason Brooks. Brooks himself made it to the finals in 1998. He placed fifth.

Heading into the national competition, Brooks encouraged his students to check everything twice on the big day. But it wasn’t quite enough to ensure victory among tough competition. Logan Boyle and Cody Collins, an Oregon team, took the top-place finish at the national finals in Dearborn.

Still, Draper was right. Each competitor that made it to the finals in his or her state is a winner. And certainly those that made it to Dearborn deserve special recognition.

NAPA is proud to sponsor these events and host the Georgia competition at its headquarters for the second straight year. The AAA Student Auto Skills Competition encourages America’s youth to remain involved and engaged in an ever-changing automotive industry. NAPA takes pride not only in supporting automotive professionals with quality parts and tools, but also in providing KNOW HOW to do-it-yourself mechanics.

Are you proud of these young people for their achievements, too? Tell them in the comments below.