Automobiles have thousands of individual parts, ranging from screws, nuts and bolts to body panels and drivetrain components. Original equipment manufacturers (OEMs) like Ford and Nissan often turn to outside suppliers to provide them with parts. So it’s not shocking that, according to Popular Mechanics, GM is embracing an emerging technology to procure parts: 3D printing.

3D-printed car parts for may sound somewhat far-fetched, but the benefits of the technology are tangible. Here’s a look at what exactly 3D printing is, and what it has to offer the auto industry.

What is 3D Printing? 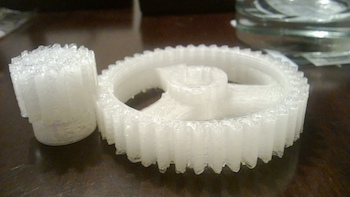 Automotive OEMs are exploring 3D printing to an increasing extent. Last year, Ford announced that it would be the first automaker to trial the technology with its 3D-printing partner Stratasys. GM promises to go one step further by rolling out 3D-printed car parts in its lineup within approximately a year, according to Popular Mechanics.

Indeed, the automaker is working with California-based Autodesk to design select parts for use in some GM vehicles. For example, GM says it has developed a 3D-printed seat bracket, which will soon find its way into certain GM models.

What are the Benefits of 3D-Printed Parts for Cars?

The benefits of utilizing 3D printing abound. Both automakers and replacement part manufacturers can maintain in-house quality control of the part, while enjoying the lower cost of making it. Instead of using molds and dies, which must eventually be discarded, 3D printing allows manufacturers to only use the materials needed to make the part. As you might imagine, eliminating waste alone offers a huge environmental benefit.

GM says that its 3D-produced seat bracket has other benefits, including being 40 percent lighter and 20 percent stronger than the original part, according to Popular Mechanics. And instead of utilizing eight components to form the part, the 3D-printed seat bracket involves just one component, significantly streamlining the manufacturing process.

How Might This New Tech Breathe Life Into Old Rides?

Not only do automakers and replacement part manufacturers have the capacity to 3D print new car parts, but they can also source out-of-production parts, as needed. This may prove useful for responding to recalls or even developing a limited-parts run for a retired model or orphaned brand, such as the Pontiac Bonneville or Saab 9-3. It’s a strange thought, but that nearly impossible-to-find replacement part for your orphaned car may soon come to you by way of a 3D printer.

3D-printing technology has been around since the 1980s, according to Autodesk, but its industrial applications are still under-explored. With GM leading the charge, 3D-printed car part cars could become the new normal.

Check out all the maintenance parts available on NAPA Online or trust one of our 17,000 NAPA AutoCare locations for routine maintenance and repairs. For more information on 3D-printed car parts, chat with a knowledgeable expert at your local NAPA AUTO PARTS store.