The 20-year-old rookie relied on his dexterity and detailed guidance from Mountain Dew spotter Eddie D’Hondt to work his way into the top 20 within the first 20 laps of the race. As the green-flag run continued on, Elliott’s handling started to deteriorate and by the time the team was able to pit on Lap 92, he had dropped back to 24th. After green-flag pit stops cycled through, Elliott reemerged in 22nd one lap down.

The first caution of the race was called for debris on Lap 157. On the ensuing restart the rookie made an impactful move jumping to the outside of the Nos. 14 and 43 cars overtaking two rows of competitors. The young driver impressed not only the commentators, but his fellow competitors as well.

“What the 24 did on that restart was sexy – that was pretty cool,” three-time NASCAR Sprint Cup Series champion Tony Stewart told his team over the radio.

“What the No. 24 did on that restart was sexy.”- @TonyStewart

Elliott continued the positive momentum working his way to be the first driver one lap down.

“Keep fighting the fight man,” No. 24 team crew chief Alan Gustafson told Elliott over the radio on Lap 230 as the rookie was holding on to the lucky dog position. “You’re doing a great job – keep digging bud.”

Finally, the Baja Blast team caught their break on Lap 251 when the caution flag came out allowing Elliott to move back onto the lead lap. He reported that the car was “good” and he and Gustafson discussed strategy before green-flag conditions resumed. Their strategy paid off and Elliott rocketed through the field racing into 13th by Lap 288. He maintained his ground and cracked the top 10 on Lap 336.

The Dawsonville, Georgia, native raced his way all the way to ninth with 64 laps remaining steadily gaining ground. After a caution flag waved with 42 laps remaining, Elliott restarted 13th and he gained one position passing teammate Dale Earnhardt Jr. before the checkered flag concluded the race. 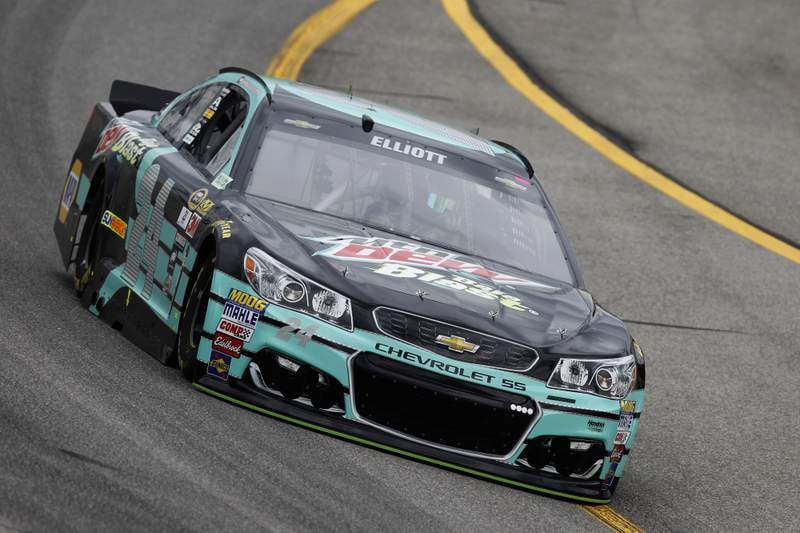 The next event on the Sprint Cup schedule will be at Talladega Superspeedway on Sunday, May 1st. The event begins at 1:00 p.m. ET with live coverage provided by FOX.