With so many electronic gadgets in their possession, saying that people are power hungry might be a bit of an understatement. At home and on the road, electronic devices use a lot of power. Nearly everyone with a smartphone or tablet uses a USB car charger that plugs into the 12-V (volt) outlet in the car. Two or three devices can charge this way, but what if the device can’t be charged via USB? In that case, a power inverter, sometimes called a DC-to-AC converter, is indispensable. Here’s how to choose a power inverter to match your needs. 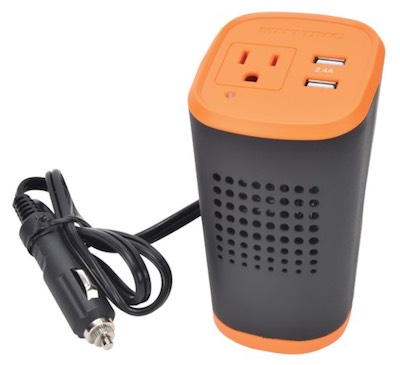 Most laptops and handheld game consoles plug into a 120-V household outlet for recharging, along with other household appliances. Sometimes, people crave the comforts of home on camping trips and road trips. Whether factory-installed or aftermarket, power inverters mean you’ll never be without the right power source while on the road or even during a power outage.

What Power Inverters Do

Basic power inverters usually have at least one 120-V outlet, but different models may feature two or more 120-V outlets, as well as USB charging ports. Smaller power inverters of up to 300 W (watts) are usually plugged into the 12-V power socket, while those over 300 W are usually hardwired into the vehicle’s electrical system with dedicated circuit breakers or fuses.

Simply put, power inverters convert 12-V DC (direct current) to 120-V AC (alternating current). It’s a two-step process, really, but it’s all internal and accomplished electronically. First, a transformer circuit steps up the voltage from 12-V DC to 120-V DC. There’s also a corresponding drop in current — a 10-A (amp) input current results in 1-A output current, which will be important later on in the discussion. Then, an inverter circuit turns the 120-V DC current into 120-V AC.

How to Choose a Power Inverter

The power inverter needs to be rated for whatever is being plugged into it, which is easy to calculate if you know the power requirements of the device. Laptop chargers range from 40 W to 250 W, and hair dryers from 800 W to 2,000 W, for example. A 400-W power inverter might handle the laptop or an LCD television, but not two laptops or a hair dryer. A 3,000-W model could comfortably handle the hair dryer, or a couple of laptops, a television and a game console.

At the same time, the electrical system needs to be able to handle the load, because more power output requires more power input. Following Ohm’s law, we can calculate that 300-W power inverters draw 25 A, which might blow the power outlet fuse on some vehicles. A 1,750-W (1,500-W continuous) model draws 125 A, which requires a dedicated line from the battery and uses a 4/0 AWG cable and a 250-A circuit breaker.

If your vehicle has a built-in power inverter, check the owner’s manual for power output and capabilities. Be careful not to exceed its limits. Also, never replace blown fuses with bigger ones. If you’re blowing fuses, a heavier fused and dedicated line will safely solve the problem.

Whether camping, glamping, beach hopping, working outside, road tripping or surviving a power outage, having the right power inverter will keep your gear fully charged.

Check out all the electrical system products available on NAPA Online or trust one of our 17,000 NAPA AutoCare locations for routine maintenance and repairs. For more information on how to choose a power inverter, chat with a knowledgeable expert at your local NAPA AUTO PARTS store.

NAPA Know How Blog Plugging In On The Go: How to Choose a Power Inverter