Your battery went flat, it is dead and you need to get to work in the morning. After rummaging around in the cabinet, you drag out hulking metal box with two switches, a set of wire clamps and a wall cord. You battery charger looks just like the one your grandpa used 40 years ago on his Buick. Heck, this might actually BE the one that charged the old Buick every winter’s eve. You shake off the dust, plug it in and are greeted with the soft hum of the transformer. No, this isn’t Optimus Prime; it is the part that makes the charger work. You nod you head in satisfaction and head back into the house. A few hours later you come out to check on things. One quick sniff and you know something isn’t right. A look into the engine bay and your suspicions are confirmed, that old battery charger has overcharged the battery, which is now boiling over, sending the smell of sulfur wafting through the air. Now you’ve done it, time for a new battery.

The reason that those old-style chargers boil the electrolytes in a typical flooded battery is because they don’t shut off when the battery has reached capacity. This can be controlled through several methods. Solid state controls use resistors and capacitors to measure the voltage on the battery. These work, but they can fail, leaving your battery melted inside your car. 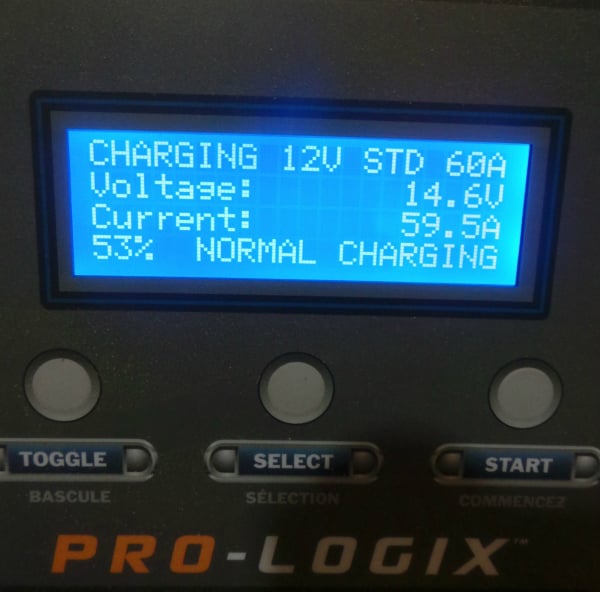 A microprocessor is essentially a computer for you battery charger. Where a solid-state charger puts amperage to the battery until it shuts off, the smart charger operates in a much different manner. Rather than simply blasting the voltage charge to the battery, the smart charger utilizes a multi-phase charging cycle similar to what the alternator does in the car. Pro-Logix smart chargers from SOLAR use a 7-phase cycle to achieve maximum charging efficiency.

This is the first stage, where the system is powering up, preparing the charger to work. Output is roughly 6 amps, while the voltage increases from 4 volts to 7.

The amperage is increased to 20 (depending on the model), and voltage increases, maxing out at 14.4 volts. This is the longest phase and puts the majority of the charge into the battery.

If you just turn off the charger, much of the power charges gets lost. This is because the plates and electrolytes in the battery are a chemical process, it takes time to absorb all of the energy from the charge. The absorption phase slowly reduces voltage and amperage, allowing the battery to work, retaining more of the fast charge.

This is the stage in which the charging cycle is finished, and the cells have equalized.

The next 3 stages are part of the maintenance cycle.

The battery and charger go into a rest mode; there is no voltage or amperage running through the charger in this phase. This allows both components (battery and charger) to cool down, as well as reduces the possibility of drying out the battery during extended storage.

At this point, the battery is fully charged at rest, but what about with a load? The charger will run a series of load tests, working the battery to find out if it is holding the charge. This also prepares the battery for the restoration phase.

After the exercises, the battery’s charge will be reduced, so the charger runs through a charging cycle that is similar to the fast charge, but reduced in strength. This maintenance routing ensures that the battery is at full capacity and ready to be put back into service.

Chances are when you need a battery charger, you are in a situation where you need to get your battery charged and it needs to happen quickly. A smart charger will compensate for ambient temperature, battery condition, and other factors to ensure that your battery gets charge quickly and charged safely, ensuring that it lasts.

Other types of vehicles, such as motorcycle, ATVs, watercraft and lawn mowers often have specialized batteries that are not easily charged with a bargain-store charger either. The smart charger is capable of handling any lead-acid battery, big or small, 6 or 12-volt, of any type currently on the market.

The last thing you want to do is waste time charging a battery with a bad cell inside. The Pro-Logix chargers from SOLAR have internal testing mechanisms that check the batter for bad cells, sulfation (this is what happens when a battery is used when not fully charged), or deeply discharged batteries.

Smart chargers are smart, so smart that they know when the battery is connected correctly. Hook it up wrong, and it will tell you.

Unlike a solid-state charger, the smart charger is also the perfect solution for long-term storage. Over time, batteries will lose their charge naturally. With a maintenance charger connected, the battery will remain fresh during storage so that when it is time to ride, the battery is good to go.

For those times that you just have to get the car going and don’t have time to let the battery charge, there is boost mode. Depending on the charger, you can get 20 amps on up to 250 amps of engine-cranking amperage for getting your car started and down the road. Just don’t forget to plug it in when you get home for a proper charge cycle.

How to choose a charger

You know you need a high-quality battery charger, but you don’t know which one to choose. We have broken them down into several categories that will help you decide exactly what you need. All of the Pro-Logix chargers are capable of charging all types of batteries and each one has the 7-phase maintenance cycle to ensure that the battery it is connected to lasts as long as possible.

The casual user is defined as owning 1-2 vehicles, living in a moderate climate, where both vehicles are driven daily. Driving your car every day helps maintain the battery, which reduces the need for regular use of a battery charger. The Pro-Logix PL2310 or PL2320 are perfect for the casual user to provide a maintenance charge for vehicles, personal watercraft, ATVs, and battery-powered lawn equipment when needed. The PL2310 has 2, 6, and 10-amp charge modes, where the PL2320 steps up the amperage to 20 amps for a faster charge, perfect for larger batteries and heavy-duty batteries such as lawn equipment and PWC/ATVs where you need a full battery in relatively short charge time.

When you need emergency starting power, boost mode is what you want. The Casual Plus user have one or more vehicles that sits unused for longer that a few days at a time, owns multiple PWCs, ATVs or battery-powered lawn equipment. Just like the casual chargers, there is a 10-amp and 20-amp version, however the PL2510 (10-amp) and PL2520 (20-amp) feature a 55-amp and 100-amp engine starting boost mode. These chargers are what you want if you live in an extreme-climate area where the freezing cold can zap your battery’s charge overnight and you need to get to work. Simply connect the charger, fire it up in Boost mode, give it a few minutes, and then hit the key to start the engine. These chargers are also perfect for starting those vehicles that sit for months at a time, such as ATVs, PWCs, and battery-powered lawn equipment.

If you run a shop or just own a lot of vehicles that use batteries, then you might want to consider a wheeled charger, such as the Pro-Logix PL3730. This charger features 5, 15, 40, and 60 amps in standard charge mode, with a 275-amp boost mode for starting vehicles with completely discharged batteries.

We put the Pro-Logix PL2520 charger to the test. We had a battery that had been causing some problems for its owner. The alternator is not working properly and the battery subsequently went flat. The battery was put on the bench for an overnight charging cycle. Here is how that went: 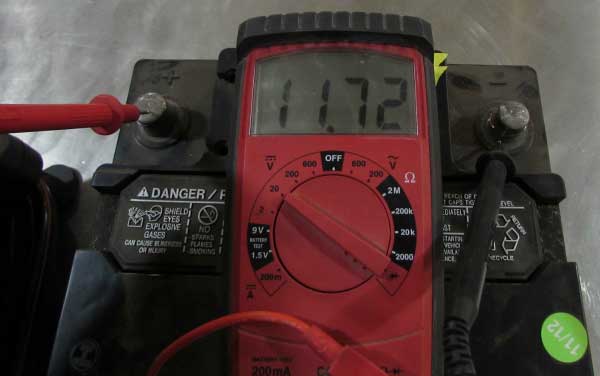 First, the battery was tested with a voltmeter. 11.72 volts at rest, but there was no enough energy stored to crank the engine.

The PL2520 was connected and it recognized the battery and showed the current charge on the display.

You can choose several variables for the charging rate, voltage and battery type. We put the charger into 10-amp, 12-volt, Standard battery configuration as we had time for an overnight charge. If we needed the battery quickly, 20-amp would be faster, and boost mode would start the car, but this battery needed a full charging cycle as the alternator needs replaced in the car.

The charger does not begin the cycle until you hit the start button. This is part of the safety features, if you were to touch the clamps together while connecting the battery, it won’t blow the circuits.

When the charging cycle is complete, the charger illuminates the green “Charging Complete” light. There are no dials or gauges to decipher, when it is done, it tells you.

The battery was disconnected from the charger and left to rest for an hour to check the residual charge. The voltmeter showed a full 13.09 volts resting voltage, and the car has not had any issues starting for 1 week without any additional charging for our tests. After the one-week, the battery has been connected to the charger nightly.

The alternator in the car needs to be replaced, as it is only charging part of the time. This is where a smart charger is very handy. The battery can be connected each night to ensure that the battery stays charged until the alternator can be replaced. Many modern cars use alternator locations that make it extremely difficult to change them, and the car is often down for a long time. This particular vehicle, a 2000 Mercury Cougar, is one of those vehicles. Until the alternator can be replaced, the Pro-Logix Charger will keep the battery from being deeply discharged and ruined, and allow the owner to continue driving it to work. If you have a long commute, this is not a good solution, but if you only have to drive 30 miles a day, it is good stop-gap alternative.

Check out all the tools & equipment available on NAPA Online or trust one of our 17,000 NAPA AutoCare locations for routine maintenance and repairs. For more information on what type of battery charger is best for you, chat with a knowledgeable expert at your local NAPA AUTO PARTS store.