Complex Networks, Film 45, Markay Media, and NASCAR champions Hendrick Motorsports have teamed up on an original eight-part documentary series that journeys deep inside the teamwork, sophistication and heart that makes stock car racing an American institution. 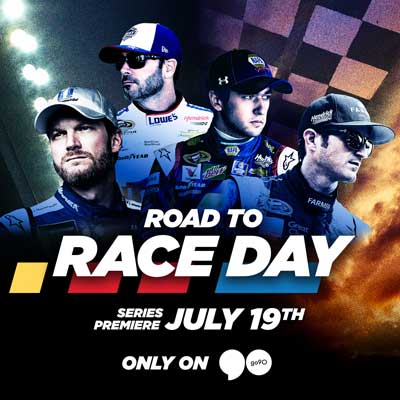 “At the heart of the series is a team of people who share an incredible passion for and dedication to stock car racing and a drive to win. Hendrick Motorsports believed in us and gave us unparalleled access to share their story, and we’re grateful to them for inviting us into their family,” Berg said. “Road to Race Day adds a personal dimension to the sport, and it spotlights the passionate individuals who make Hendrick Motorsports one of the most successful racing teams of all time.”

Hill added, “Stock car racing is an essential part of the American fabric. My team and I wanted to demystify the sport and its unique culture while celebrating the rich personalities whose lives intersect on race day.”

“When we committed to the project, our goal was to give people something that looked and felt unlike anything we’d ever done,” said Marshall Carlson, president of Hendrick Motorsports. “We knew it would require an unprecedented level of access, and that proved to be true. Whether the viewer is a NASCAR fan or not, we think they’ll be surprised and walk away with a different impression of our team and sport. We’re grateful to Cynthia, Peter and everyone involved for their enthusiasm about the series and the incredible work that went into making it.”

“Cynthia Hill, Film 45 and everyone at Hendrick Motorsports have delivered riveting storytelling that humanizes the sport and brings to life all that’s involved in getting to the finish line,” said Rich Antoniello, chief executive officer of Complex Networks. “The series goes deep into the culture of racing to show the emotion and excitement of the sport, and we’re thrilled to be working with Film 45 again and honored that Hendrick Motorsports entrusted us with sharing their story with audiences.”

Each weekly episode showcases the energy of racing through the stories of four superstars of the sport and their colorful teams. Strategy, preparation, and focus for each race are propelled by intensity and emotion as Road to Race Day crisscrosses the country to capture each dramatic moment as it unfolds.

In 2016, Elliott, heir to the car formerly driven by racing legend Jeff Gordon, began his rookie-of-the-year campaign, while veteran Earnhardt faced one of the most challenging seasons of his storied career. Johnson continued to chase his record-tying seventh championship, as Kahne fought to get back to Victory Lane. From North Carolina to Northern California, Road to Race Day follows these merchants of speed, their crew chiefs and teams as they confront ever-changing rules and unrivaled competition at more than 200 mph.

Complex Networks and Film 45 have previously teamed on the critically-acclaimed series QB1: Beyond the Lights for go90, which has been renewed for a second and third season. Road to Race Day is the latest Complex Networks original series in a growing lineup of high profile shows that also includes: Thanksgiving created by Dan Powell and Bethany Hall and starring Chris Elliott and Amy Sedaris; Embeds from Megyn Kelly and Michael DeLuca; Top Grier starring Hayes Grier; and Drive Share created by and starring Paul Scheer and Rob Huebell.

NAPA Know How Blog Road to Race Day – Behind The Scenes of NASCAR: Teaser