After 26 years behind the wheel of a nitro-burning machine, NAPA AUTO PARTS Dodge Funny Car driver Ron Capps finally gets to check ‘a win at Indy’ off of his bucket list. 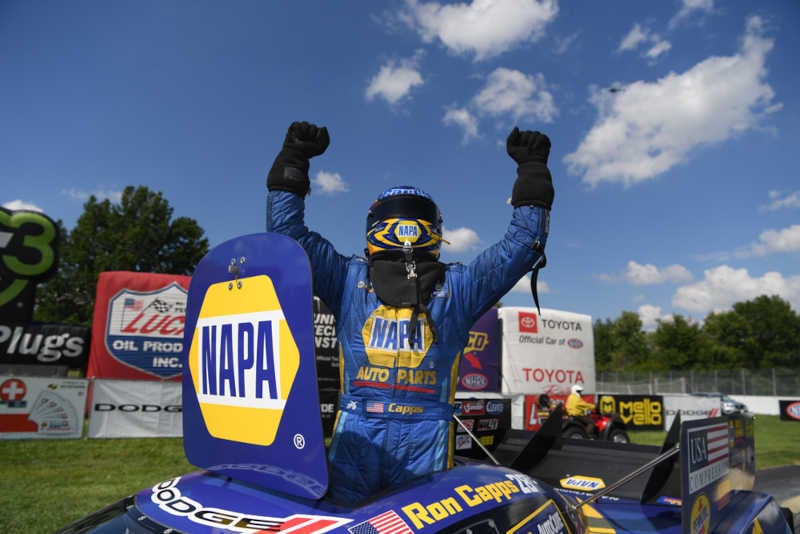 It may be hard to believe, but Capps, the second-winningest Funny Car driver of all time with 64 national event victories (65 overall, including one in Top Fuel), had never managed to conquer the famed Indianapolis dragstrip prior to Sunday’s triumph at the Dodge NHRA Indy Nationals presented by Pennzoil. In fact, Lucas Oil Raceway at Indianapolis was the only venue on the current NHRA tour where Capps had not visited the winner’s circle at least once over the span of his impressive career. He came close, racing to a runner-up finish versus J.R. Todd in 2017, but was unable to seal the deal until Sunday afternoon when he defeated Todd in a rematch of the 2017 final round in front of a live FOX TV audience. 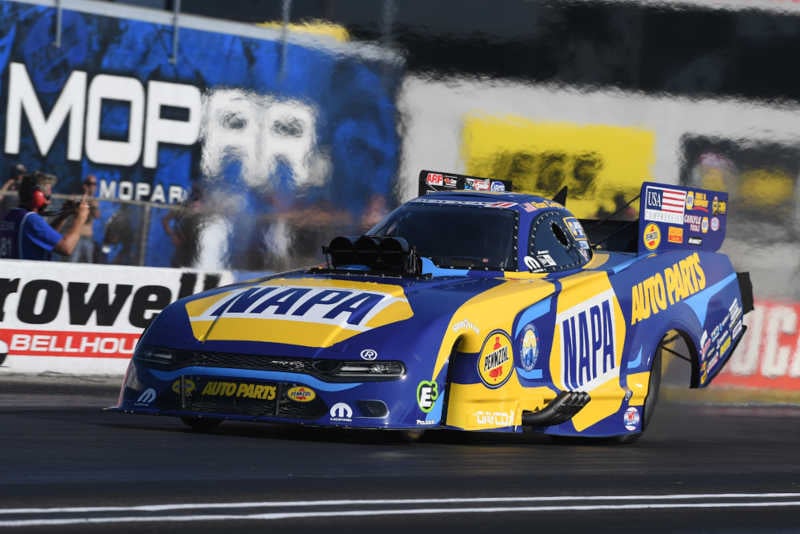 “This trophy is going to my wife, Shelley, who has been coming to this racetrack with me for 26 years and has ridden that emotional roller coaster with me, getting close and not winning,” said Capps of his long and hard-fought journey to finally win an Indy Wally trophy after more than two decades of trying. “On top of it, her birthday is always at the Indy (U.S. Nationals) race and all those years she’s rode along with me and seen the emotional wreck I’ve been not winning and knowing how much it means to me. I just called home and she was crying. It just means so much to us.” 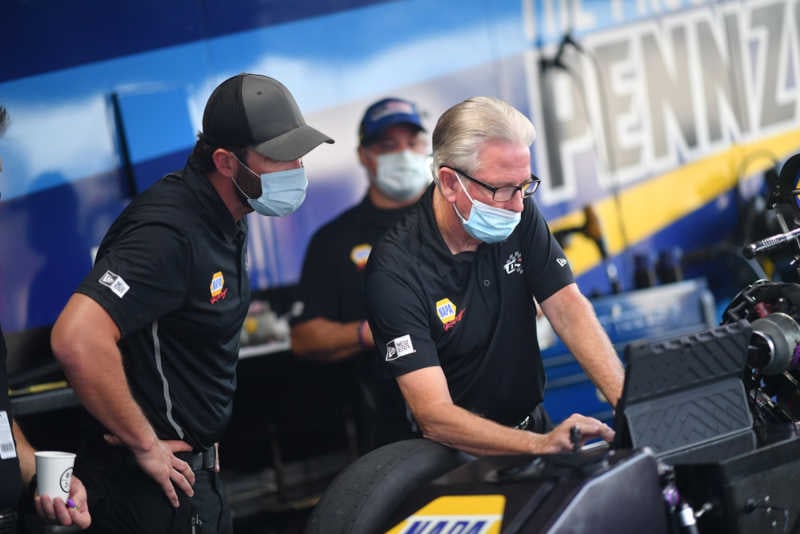 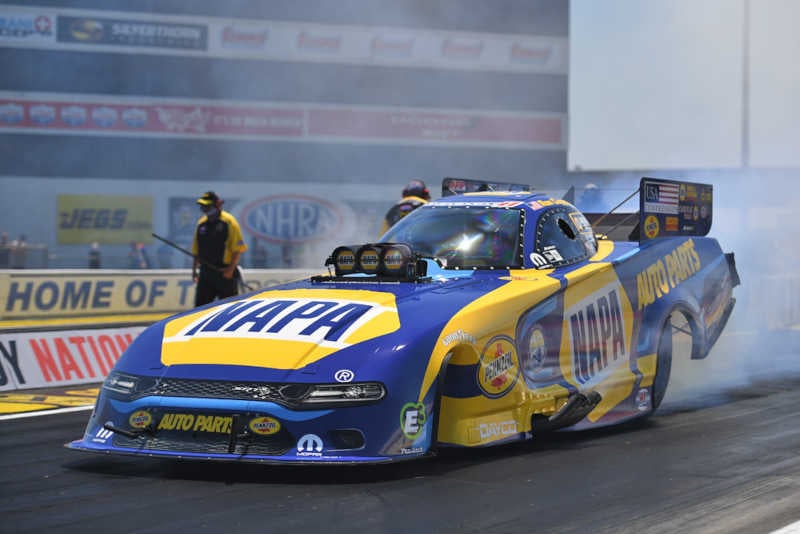 “Leave it to 2020 to get my first win at Indianapolis,” said Capps, of his win at the fifth event of the 2020 season. “For a driver to be able to say that he’s won at every track on the (NHRA) circuit is pretty incredible and it shows you the talent that I’ve had around me since I started my career.” 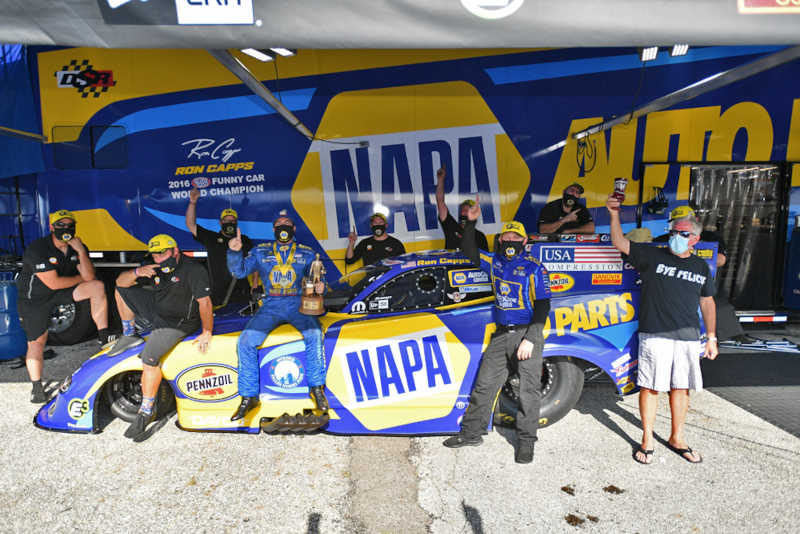 The 2016 Funny Car world champion began his campaign for the Dodge NHRA Indy Nationals presented by Pennzoil trophy by qualifying his NAPA AUTO PARTS Dodge Charger SRT Hellcat third, his best starting position to-date in 2020. He started his race day by defeating fellow Funny Car veteran Tim Wilkerson in round one to set up a quarterfinal match-up with Blake Alexander. Capps’ quick reflexes earned him the holeshot advantage over Alexander and his stout, 3.990-second pass ensured he led from start-to-finish over Alexander’s 4.036-second effort. In the semifinals, Capps once again used his quick reaction time coupled with a solid E.T. of 4.065 to set off the win light and earn him a bid to the final round, his first of the season and first since racing to victory in Brainerd, Minn. in 2019. 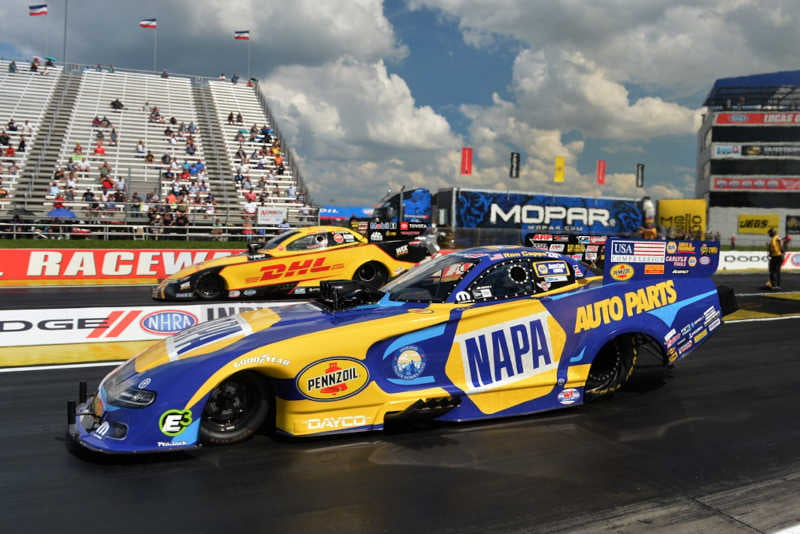 In the final round, Capps’ opponent, J.R. Todd, drove into immediate tire smoke in the opposite lane while Capps clocked a winning 4.110 E.T. to earn his 65th overall victory, and first of the season. 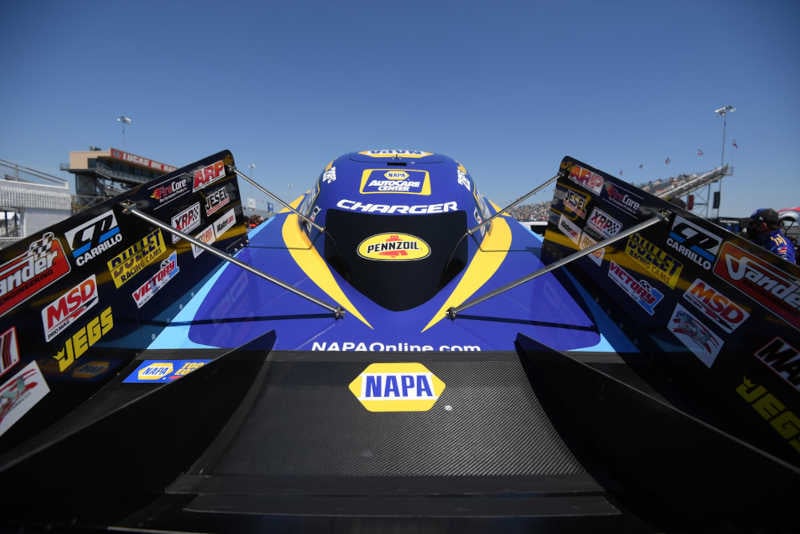 Capps will be the first to admit, his 2020 campaign got off to a rocky start. After a string of recent missteps including a pair of first-round losses, and a bottom-seeded qualifying effort at the first race back after a four-month break, Sunday’s win was just the shot in the arm Capps, a top-ten points finisher for the past 15 years, needed. 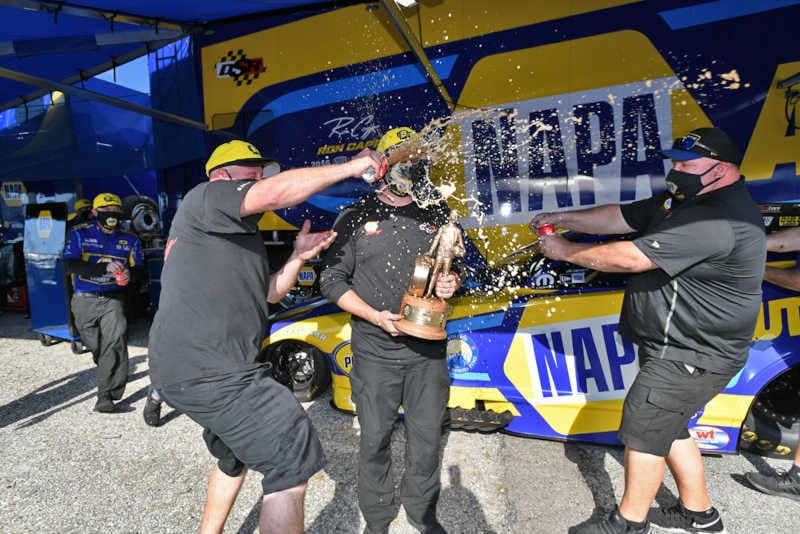 “The last two weeks were hard with these two races here,” explained the Carlsbad, Calif., resident. “After the (four-month) break, we came back and knew that we were on limited time to make a run in the points. We came back from the hiatus, and I didn’t get a whole lot of laps in the car. We didn’t get to do a whole lot of testing like some other teams did. The one saving grace is that I’ve got a great team and (crew chief Rahn) Tobler gives me a great car so that helped. I just haven’t had a whole lot of confidence mainly because we haven’t had a whole lot of runs. We’ve been knocked out first round so this helped me a bunch. This was a feel-good weekend on many different fronts; my confidence is back and Tobler found his racecar.”