Ron Capps made it ten in a row for Don Schumacher Racing on Sunday afternoon at historic Gainesville Raceway. Capps defeated Tim Wilkerson in the final round of the NHRA Gatornationals to earn DSR its tenth consecutive Funny Car triumph, a streak which dates back to October 2019. 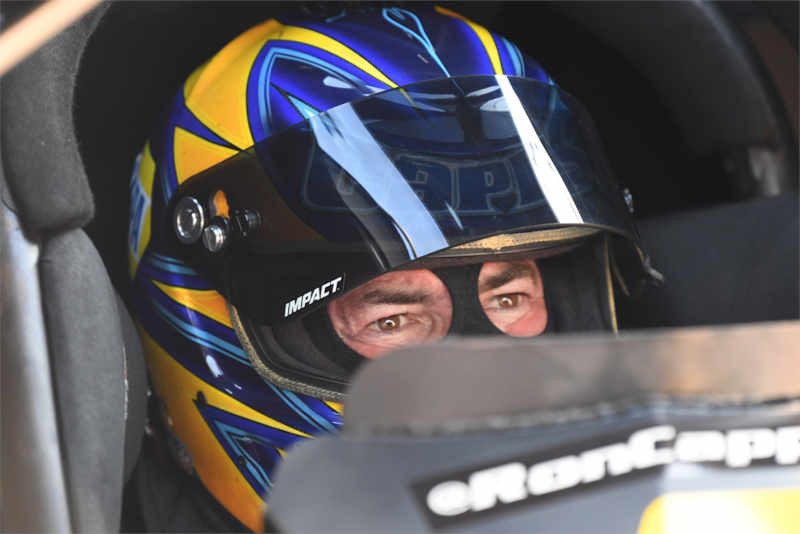 By claiming the victory, his fourth at Gainesville, second in 2020 and 66th overall (one Top Fuel), Capps advanced a position in the Funny Car point standings, with DSR’s Funny Car quartet now occupying the top four spots on the leaderboard. 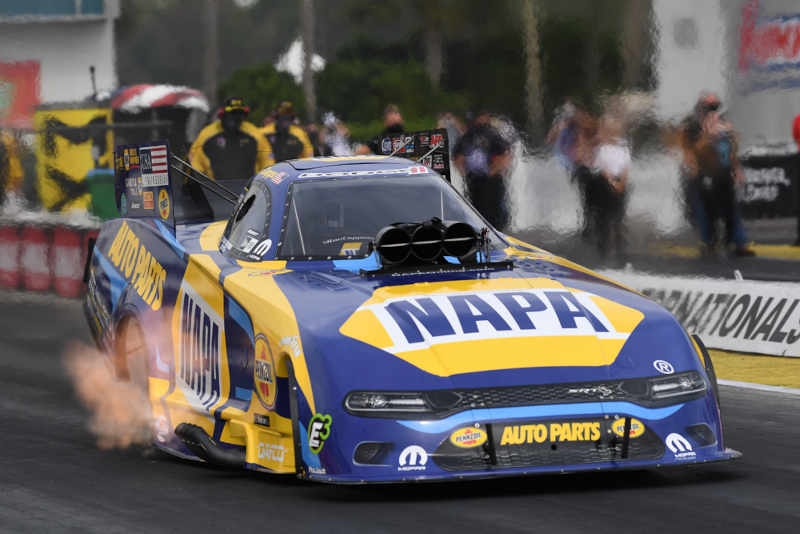 On race day, the NAPA AUTO PARTS Dodge Charger SRT Hellcat was unstoppable. Crew chief Rahn Tobler, who was celebrating a birthday on Sunday, tuned Capps’ machine to sub-four second passes throughout all four rounds, battling the hot and humid track conditions that proved troublesome for many other teams. Starting from fourth, Capps was out of the gate first in round one and ran a 3.999 E.T. to outrun his opponent’s 4.024. In the quarterfinals, he lit up the scoreboard with a 3.968 to defeat Alexis DeJoria’s 4.014-second pass, and in the semifinals, Capps clocked low E.T. and top speed of the meet (3.898 at 329.99) for the win over his teammate and No. 1 qualifier Matt Hagan, but the win didn’t come without drama as Capps suffered an explosion just past the lights. He wrangled his machine to a safe stop, but the NAPA team had their work cut out for them to get ready to run the final round. The thrash was on and Tobler and the crew, along with several other DSR team members, worked quickly to get the NAPA back-up car race-ready. Their hard work paid off when they came up for the final round and Capps threw-down with a 3.937 at 323.12-mph to defeat Wilk’s 3.945 and deliver the birthday win for his crew chief. 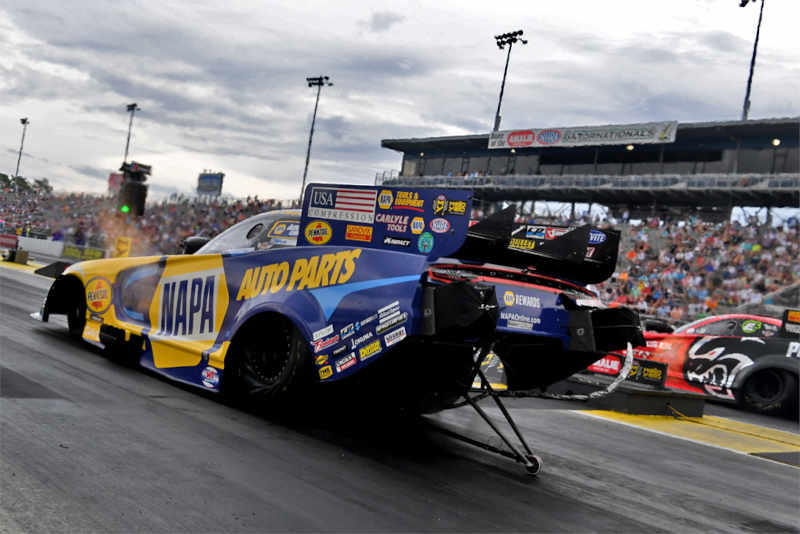 “We blew up right when I stepped off the gas in the semifinals,” Capps said. “It exploded down there but thanks to the Don Schumacher Racing fab (fabrication) shop, this body stayed on, rather than potentially launch up in the air. I felt very safe after it blew up and everything stayed together on the car. 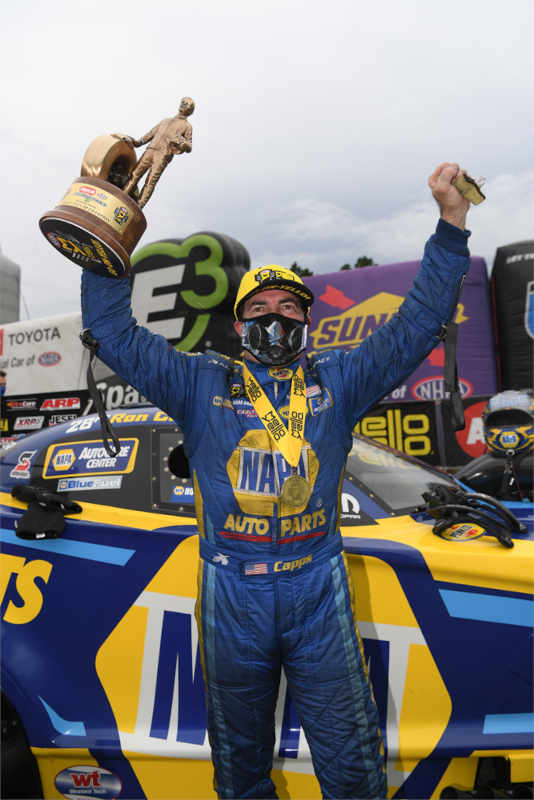 “We all knew it was Tobler’s birthday and we all secretly wanted to win on his birthday. But to bring out a car that we had as a backup, that’s never made it to the finish line and it goes 3.93 in the final round of the Gatornationals is crazy. He’s had that car up in the trailer since last year when we ran it at ‘Night Under Fire’ at Norwalk (Ohio) and made a check-out run with it and then he put it away for these occasions. With live TV pushing us, we had every team member of Don Schumacher Racing over here working on the car. It was unbelievable. Team members you’re battling against in the championship are over here helping our guys and it was cool. I’m so happy for Tobler and (assistant crew chief) Dustin (Heim) because to go up there in the final round and beat someone like (Tim) Wilkerson in a final is always tough to do, but to do it with a car that has never been to a finish line, that’s NAPA Know How.” 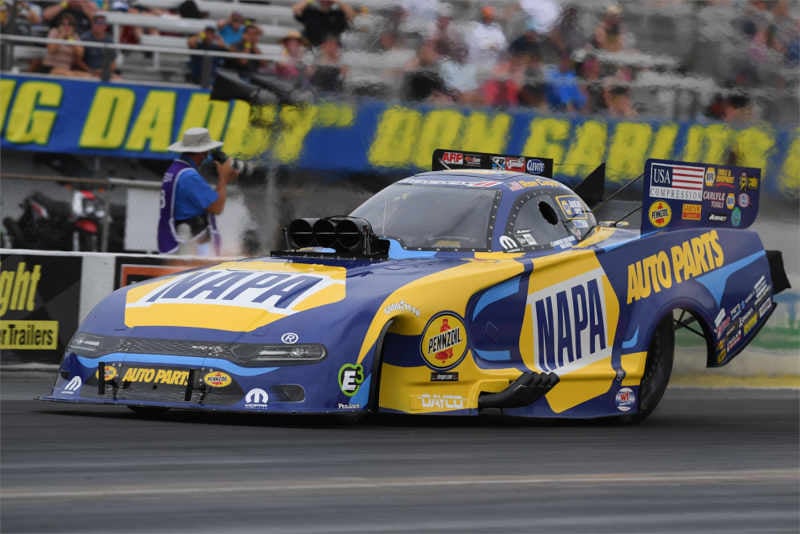 By nabbing the Gainesville win, Capps put himself solidly in the Funny Car championship hunt with his teammates. He sits 83 points behind top-ranked Jack Beckman, 79 behind Hagan, and 26 points behind Tommy Johnson Jr. with four races to go, including the points-and-a-half season finale in Las Vegas. With each of the four DSR drivers having contributed to the team’s ten-race win streak, Capps knows his Dodge teammates will be tough competition, but has nothing but confidence in Tobler and the NAPA team’s abilities to nab the 2020 crown. 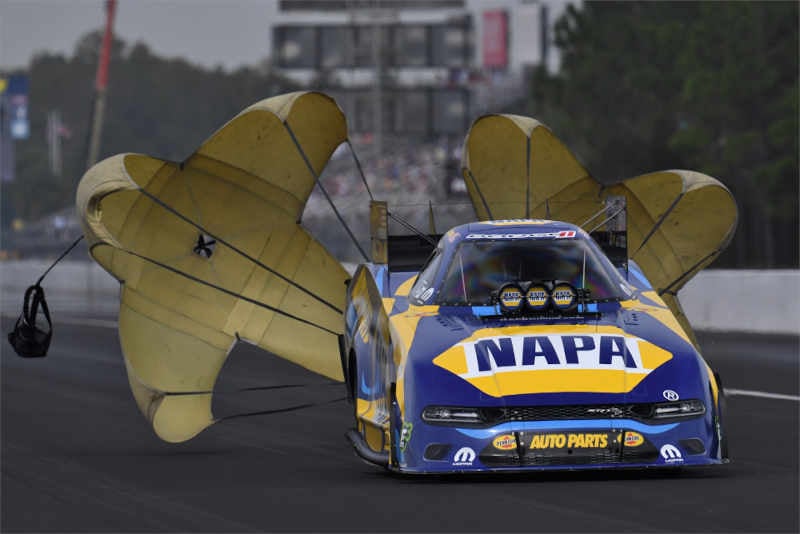 “It was a crazy day today. There was a lot going on, probably more than a lot of fans realized. We’ve always got confidence that we can win a race. That NAPA Know How I brag about that (crew chief) Rahn Tobler has, I mean everybody’s got their favorite neighborhood mechanic at a NAPA AutoCare Center and Tobler to me is that guy. He’s the guy you can trust and the guy you can count on, and I’m confident we’ll do big things as we head into this final stretch.”