After years of driving, we feel confident that we’re following every driving rule precisely. The rules have become embedded in our minds and are carried out each time we take to the road. That being said, there’s a good chance some of the things you think you “know” might not actually follow the letter of law, which might just lead to a moving violation, a costly ticket and an increase in insurance rates if not corrected.

Since the late 1970s, all states allow for a right turn on red. But that allowance comes with provisions, and these include coming to a full stop and yielding to other cars and pedestrians. Using “right turn on red” to simply yield without stopping could result in a moving violation. You’ll also be ticketed at intersections where a sign clearly forbids this practice. 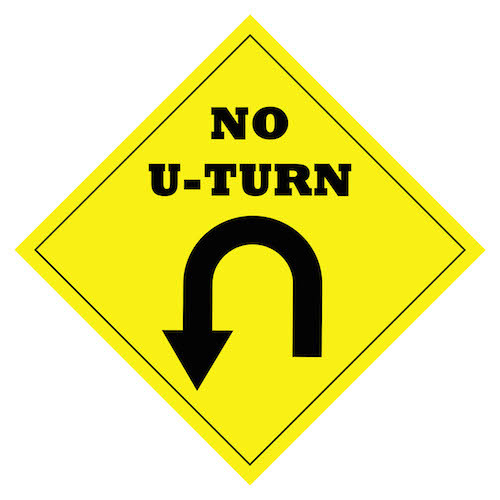 Most states have generously made allowances for U-turns. However, that generosity may be misunderstood to permit U-turns where none are allowed. For example, in California you’re allowed to make a U-turn at an intersection with a green light. You can also make a U-turn across a double yellow line when it is safe and legal to do so. But there are two places where such turns are always illegal — at or on a railroad crossing and in front of a fire station.

3. Yielding to Pedestrians in Crosswalks

In 2012, 4,743 pedestrians were killed, according to the National Highway Traffic Safety Administration. Among that number were pedestrians who lost their lives while using a crosswalk. When approaching an uncontrolled crosswalk in some states, including Iowa, drivers must yield the right-of-way to pedestrians crossing the intersection regardless of whether the crosswalks are marked or not.

4. Entering and Leaving a Roundabout

When approaching a roundabout you must yield to cars already traveling within the circle. This point is easily understood wherever a yield sign is present, but may be misunderstood when such signage is not present.

Enter a four-way stop first and you have the right to proceed before any car arriving after you. But when two cars arrive at an intersection at the same time, do you know who gets to go through the interaction first? That’s easy: the driver on the right.

One of the newer traffic movement signals is yellow turn arrows. Used at intersections that include solid red and green left-turn arrows, flashing arrows can seem confusing. A flashing left-turn yellow arrow means turns are permitted; however, you must yield to pedestrians and oncoming traffic before carefully proceeding through the intersection.

One of the more uncommon restrictions on our roads are shared bike and vehicle lanes. Such lanes are typically noted with pavement markings and road signage. When traveling in such lanes, cyclists are entitled to share the entire lane. To legally pass a cyclist, you must move into a new lane.

How many of the seven commonly misunderstood driving laws did you miss? It certainly pays to make regular visits to your state’s DMV website to review the current laws, and pay close attention to the ones adopted over the past few years. In doing so, you’ll be a safer driver and just may save yourself a bundle in citations and fees.

Check out all the maintenance parts available on NAPA Online or trust one of our 17,000 NAPA AutoCare locations for routine maintenance and repairs. For more information on commonly misunderstood driving rules, chat with a knowledgeable expert at your local NAPA AUTO PARTS store.