In recent years, hybrid and electric cars have steadily become more prevalent. It seems that every automaker has an electrified vehicle of some kind on the market. Their extended fuel economy means less fuel consumption — or none at all so it is no surprise why they are so popular with buyers. While the electric motors typically get all the spotlight, it’s their regenerative braking systems that truly get them such amazing mpg numbers. How do these vehicles take friction and turn it into power that feeds the battery? To answer that, let’s take a look inside regenerative braking systems.

The railway industry has actually been using regenerative braking for decades in conjunction with electric trains. This allows the trains to feed electricity back into the power system on down hill stretches as each one acts as a mini-generator. Some racing cars have experimented with a physical version of regenerative braking that stores energy in a flywheel spinning at extremely high speeds instead of a battery. But for cars American Motors Corporation (AMC) was experimenting as early as 1967 with regenerative braking on their AMC Amitron concept car. But it was another three decades until Toyota brought regenerative braking to the masses with the Prius. 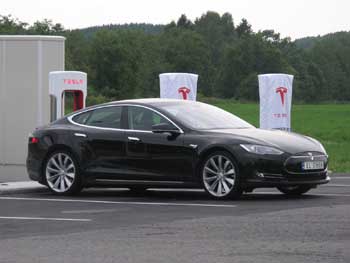 In hybrid, plug-in hybrid and fully electric cars, regenerative braking works the same way. With the wheels off, an electric or hybrid car typically has brakes that look familiar, with a rotor, caliper and other normal parts. In fact the 2012-2014 Tesla Model S uses the same brake pads as a 2014-2017 Chevrolet Corvette. However, while they have normal braking systems, electric and hybrid vehicles actually get most of their braking power from the same electric motor that propels them. By applying reverse current to the motor, it’s forced to turn backward — essentially driving the car in reverse. The car’s momentum keeps it moving forward, while computer algorithms monitor the amount of brake being applied and the decreasing speed until the vehicle comes to a stop.

As the motor spins backwards due to the applied braking force, it’s function switches from motor to generator. Rather than the motor consuming electric current to turn in one direction, the electric generator turns. In doing so, it produces electricity that it sends back to the battery via circuitry that monitors and controls the flow of the current. When you step on the brakes in an electric or hybrid vehicle, the motor controller applies force against the motor in the form of this reversed current and opens the charging circuit. This allows the motor to act as a generator in order to both charge the battery and slow the vehicle down. The result is electric forced braking that extends travel range and fuel economy.

There is speculation that on some vehicles (in particular vehicles that are driven solely by rear wheel motors) regenerative braking may accelerate tire wear. While there is no solid evidence that regenerative braking does wear down tires faster, it is always wise to rotate tires on a regular basis (as outlined in the owner’s manual) or whenever tire wear becomes uneven between the front and rear.

By now you may be wondering why electric and hybrid vehicles still have normal brakes. The answer is quite simple. Regenerative braking is highly efficient in a vehicle that’s in motion, but it relies on just that — the car actually moving. Due to the nature of this type of braking, regenerative systems are not very good at emergency braking or bringing a vehicle to its final stop and holding it there. As such, the mechanical friction brakes only really handle quick stopping and that finally stop. Thus, they don’t do as much work and therefore don’t wear out brake pads and other components as fast as they do in a gasoline-powered vehicle.

A careful driver may be able to use regenerative braking for the bulk of their slowing needs, but the mechanical friction brakes will still need to be maintained on a regular basis. For example Tesla recommends cleaning and lubricating the brake calipers on a Model 3 once a year (or every 12,500 miles whichever happens first) for those who live in an area that uses road salt. The brake fluid itself also needs to be checked and tested every two years. Bad brake fluid needs a full brake system flush to to keep moisture and corrosion at bay. Regenerative is great, but these vehicles were designed to use mechanical friction brakes when necessary so don’t forget about them.

Regenerative braking systems are truly a wonder of modern automotive design, but they do still have limitations. While they can create controlled and consistent braking force to slow your vehicle regardless of conditions, they still require help from friction brakes. Just follow the maintenance schedule in your owner’s manual and you can enjoy many more miles of electric motoring.

Check out all the maintenance parts available on NAPAOnline or trust one of our 17,000 NAPA AutoCare locations for routine maintenance and repairs. For more information on regenerative braking systems, chat with a knowledgeable expert at your local NAPA Auto Parts store.

NAPA Know How Blog The Secrets Behind Regenerative Braking