The World of  Outlaws Sprint Car Series had officially kicked off the “Month of Money” as Brad Sweet and the No. 49 NAPA AUTO PARTS team  headed into five straight nights of racing. Tuesday night opened the racing action at Attica Raceway Park for the Brad Doty Classic. With 44 cars signed in, Sweet was scheduled to go out 13th in Flight B of qualifying. The Big Cat hit the charts at 13.415 seconds, placing him 12th overall. This slated him to start P6 in Heat Race #4. The NAPA AUTO PARTS crew gave Sweet a rocket; at the drop of the green, Sweet was the only car to drive through the middle and immediately jumped to fourth, but not long before he went around the outside, picking up two additional positions and coming across the checkered in second. 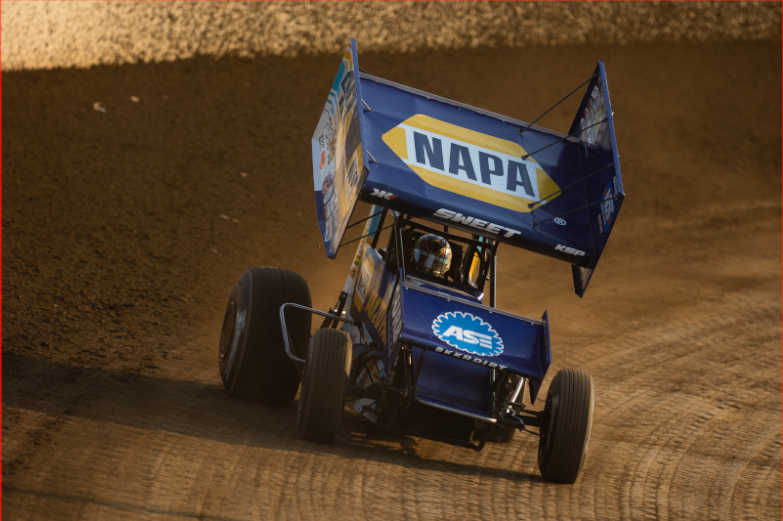 Claiming his ticket to the six-lap Fast Pass Dash, Sweet drew the third starting position. During the dash, Sweet discovered the lower line to have a more distinct advantage as he advanced one position, which led him to start on the front row of the A-main. At the drop of the green, Sweet immediately drove around the outside and took the lead. After the Big Car gained an almost two-second lead on the field, the caution came out. Following the restart, two additional cautions came out, giving second-place runner Kyle Larson multiple opportunities to pass him, which Larson capitalized on. As Sweet was running second, the track became slick and dusty. With visibility very low, Sweet fell back one more position, bringing the NAPA AUTO PARTS car home in third place. 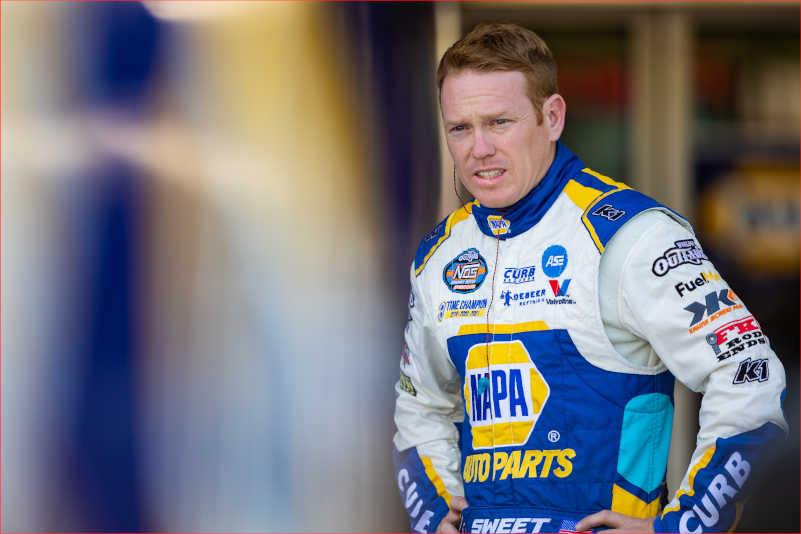 Wednesday took the NAPA No.49 team to the high banks of the “Big E” at Eldora Speedway in Rossburg, OH. On the first of four consecutive nights, 55 cars signed in, slating Sweet to go out 12th in Flight A. Stopping the clock at 13.080 seconds, Sweet was eighth overall, leading him to start fourth in Heat Race #2. Once the flagman gave the signal to go green, Sweet went high and cut to the middle, giving him the advantage and taking the air off the wings of competitors behind him. As the field began to spread out evenly, drivers struggled to gain any ground; the NAPA No.49 crossed the checkered in third place, transferring him straight to the A-main. 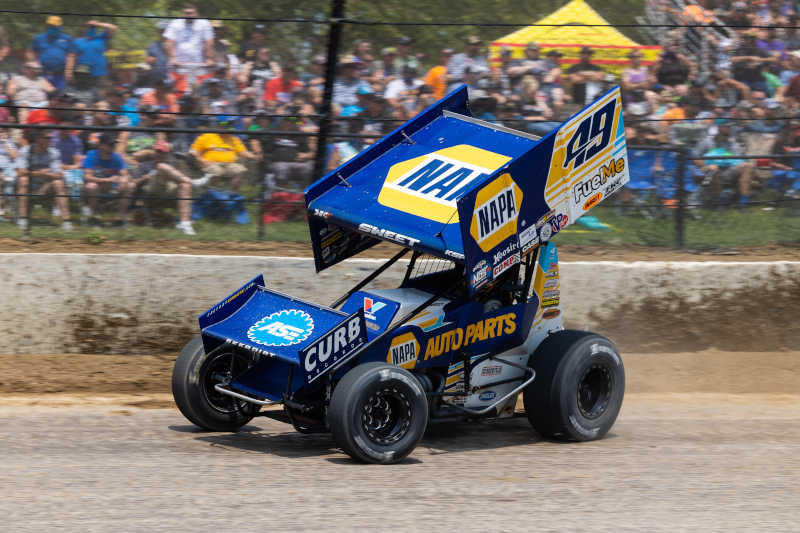 Lining up in the 11th position for 25 laps, Sweet was ready as the race went green. Searching around the track for the perfect line, the Big Cat found one that worked and started progressing forward. While catching dirty air, Sweet still managed to make gains toward the front. After a late race caution, Sweet managed to slice and dice through three different competitors, bringing the NAPA AUTO PARTS car home in eighth place. 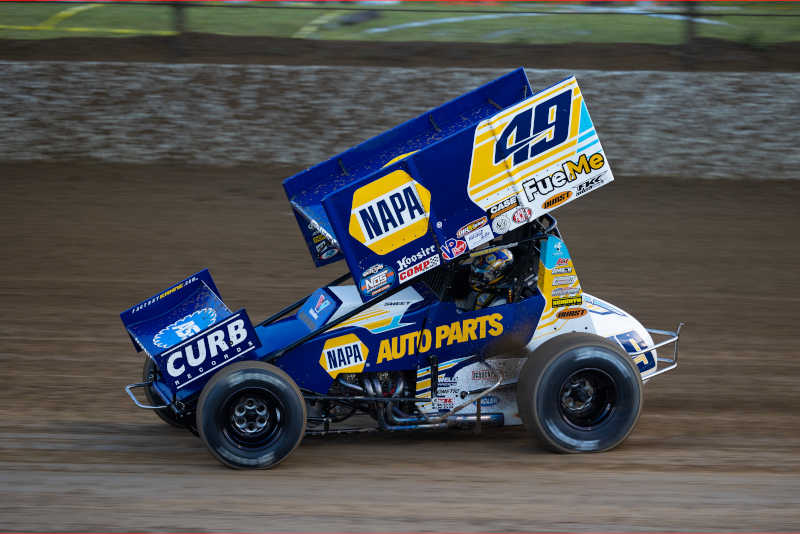 Thursday night hosted the return of the Historical Big 1 at Eldora Speedway. With a $100,000 payday on the line and 59 cars signed in, the competition would be very tough. Sweet was scheduled to qualify 34th, where he hit the charts at 13.266 seconds, placing him 25th overall. Although the qualifying time was not ideal, the heat race invert was five, slating the NAPA No.49 to start P1 in Heat Race #1. With ten laps the distance, the Big Cat got the early lead running the low line, which proved to be the more dominant line. Finally, running out in clean air, Sweet crossed the checkered, claiming the Heat Race win. 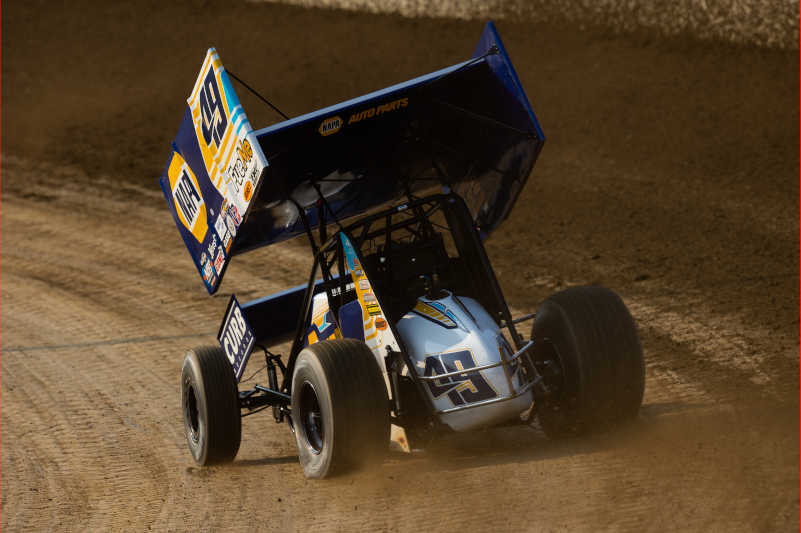 With the Historical Big 1 format, the No.49 was slated to start sixth for the 40-lap feature. Once the feature went green, Sweet was searching for lines. With the lower line being the favorite, Sweet bounced back and forth from the bottom to the middle. Pulling a slide job and making it stick, the No.49 grabbed fifth. A mid-race caution was displayed, and the Big Cat picked up another position on the restart, putting him in the fourth position. After another late-race caution, Sweet was able to hold onto the fourth position. 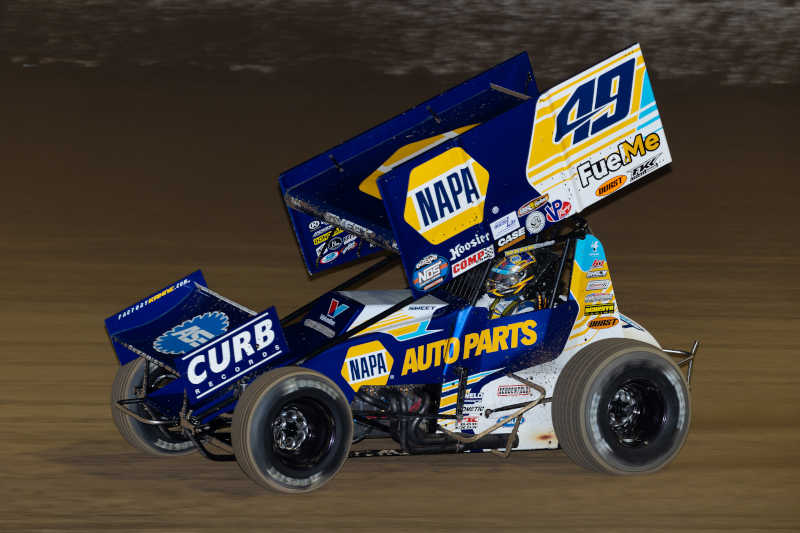 Mother Nature became a factor on Friday as a cell built up very quickly but moved through the area slowly. After a 2-hour rain delay, race officials gave the green light for hot laps. With 56 cars signed in for the Knight Before the King’s Royal, Sweet was scheduled to qualify third in Flight A; he stopped the clock at 13.086 seconds, placing him eighth overall. The NAPA AUTO PARTS team was scheduled to start fourth in Heat Race #2, but Mother Nature stepped in. The return of rainy weather postponed racing until the following day. 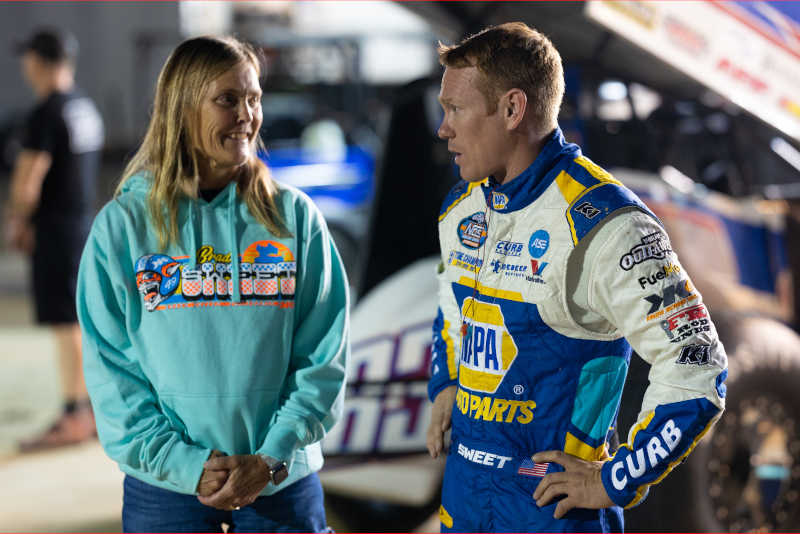 With an 11 am start time on Saturday morning, the racing action resumed. At the start of Heat Race #2, Sweet immediately jumped to the outside in an effort to claim the first position, but his competitor had the better line. After racing side by side and falling slightly behind, Sweet brought the No.49 home in second, punching his ticket to the Fast Pass Dash. Yet again, Sweet drew a great pill to start second in the Fast Pass Dash. With six short laps the distance, the Dash went green. The No.49 jumped to the high side trying to gain on the leader. However, as they were racing at about the same speed, gaining ground on the leader was a challenge. Sweet ended up finishing second, placing him outside the front row of the A-main. 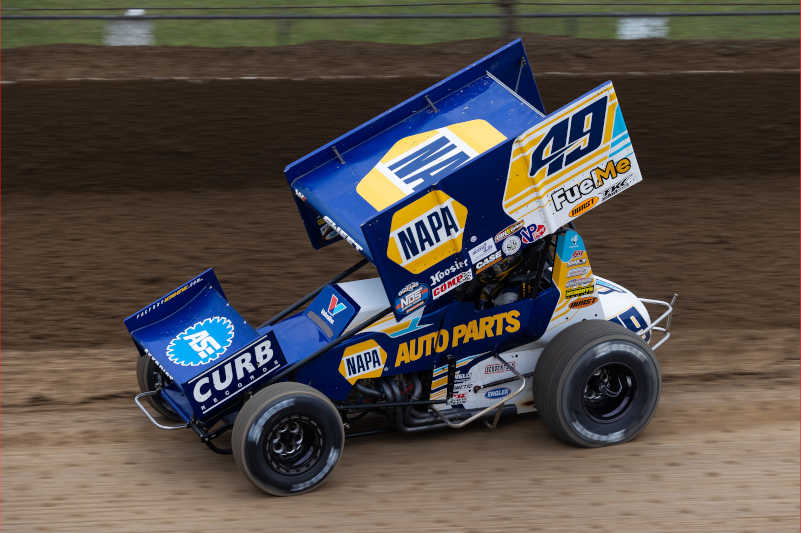 As the feature went green, the NAPA AUTO PARTS No. 49 carried great speed. Unfortunately, it wasn’t long after the start that the track began to fling dust and take rubber. With tricky track conditions and low visibility, finding the right spot to run was a challenge. The NAPA No.49 fell back to third and held on for a third-place finish. Finishing on the podium before running the afternoon show was a good sign for more progress throughout the weekend. 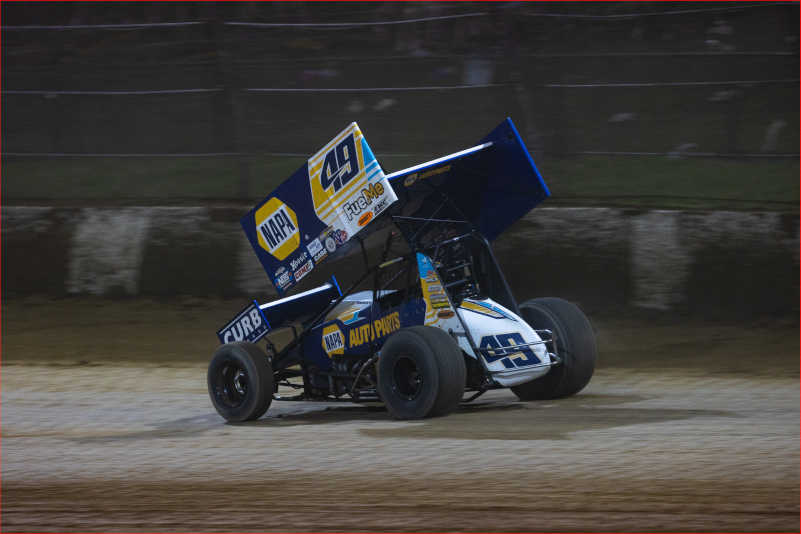 Saturday afternoon hosted the final event, the 39th annual King’s Royal. Eldora Speedway was packed with a massive influx of fans and 54 cars signed in for competition. Sweet was slated to qualify 16th; he hit the charts at 13.178 seconds, placing him second overall. Scheduled to start fourth in Heat Race #2, the NAPA AUTO PARTS team worked hard to give Sweet the best possible setup. Starting the 10-lap heat race, Sweet got a fantastic run and drove around outside the competition, quickly placing himself in second. Sweet competed for first, but the leader had the advantage; the No. 49 team finished in second place. Because of King’s Royal format, next up was the A-main event, where Sweet lined up in the eighth position. With forty laps the distance,  Sweet and his competitors all had their eyes on a potential $175,000 payday. 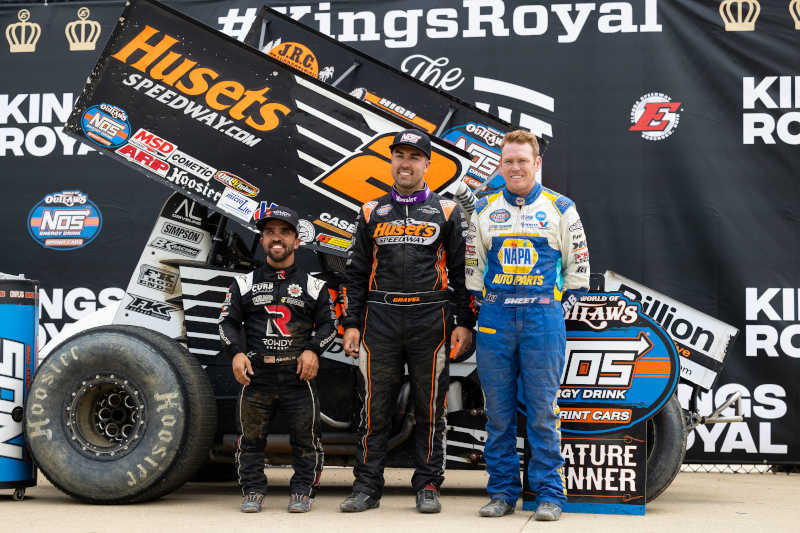 The green flag waved for the feature race. After two laps, Sweet had already jumped to the sixth position, but it was not long before a caution dropped to let some of the pre-ceremonial fireworks smoke clear. As the field went back to green, Sweet quickly started falling back. Within five laps, Sweet fell back to 12th, and his right rear exploded on lap seven as he entered turns 3 & 4. The NAPA No.49 machine headed to the work area where the team quickly replaced the right rear and got Sweet back out. As racing action resumed, the No.49 was determined to get back to the front. After gradually gaining position after position, the NAPA AUTO PARTS No. 49 managed an 11th place finish. Passing 13 cars in the remaining laps confirms that Sweet had the setup to win, but the unfortunate luck of puncturing his right rear claimed his fate.