After five consecutive top-five finishes–including a win–Brad Sweet has taken over the World of Outlaws Sprint Car Series points lead.

The NOS Energy Drink World of Outlaws Sprint Car Series kicked off another three-race week on Tuesday at Fairbury American Legion Speedway in Fairbury, Ill. Brad Sweet and the NAPA AUTO PARTS team started the night by setting fast time during qualifying with a blistering lap of 11.266 seconds around the ¼-mile, high-banked oval. 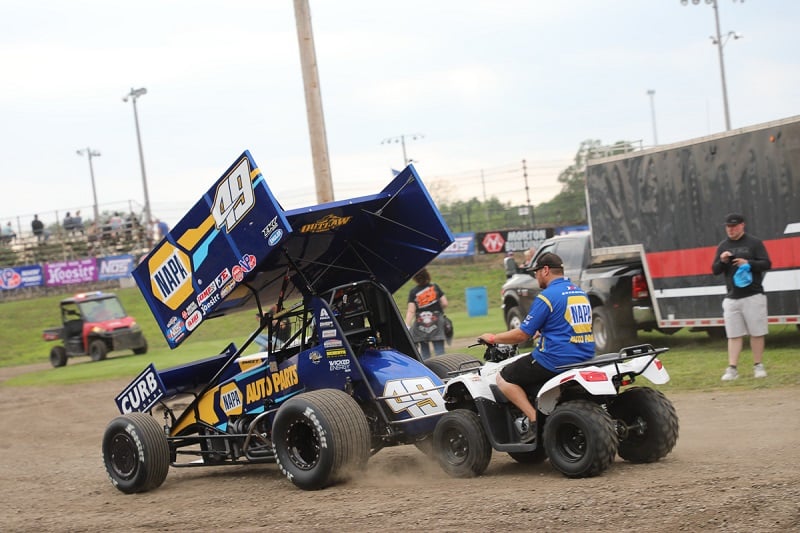 After heats and the dash, Sweet started the 40-lap feature from the third position. The race turned out to be one for the ages. 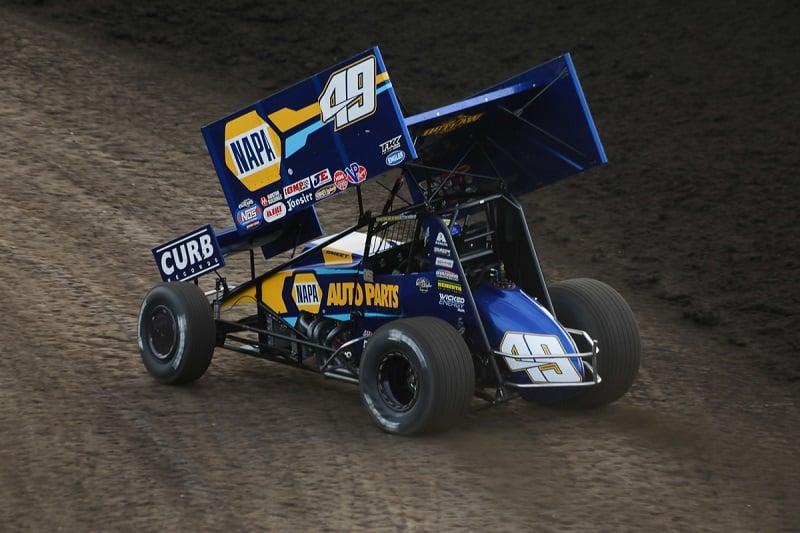 In a heated battle with Kasey Kahne Racing teammate James McFadden, and Sweet’s brother-in-law, NASCAR star Kyle Larson, the three drivers swapped the lead while navigating lapped traffic, and put on one of the most exciting races in recent memory. When the dust settled, Sweet finished second to Larson to a packed house that was on their feet for the entire race.

Next, the series headed to River Cities Speedway in Grand Forks, North Dakota. The afternoon of the race, the Kasey Kahne Racing No. 49 transporter, car and team visited the NAPA location in downtown Grand Forks. A few hundred race fans and NAPA guests enjoyed autographs from Brad Sweet and pizza with root beer floats before the racing action started just up the street. 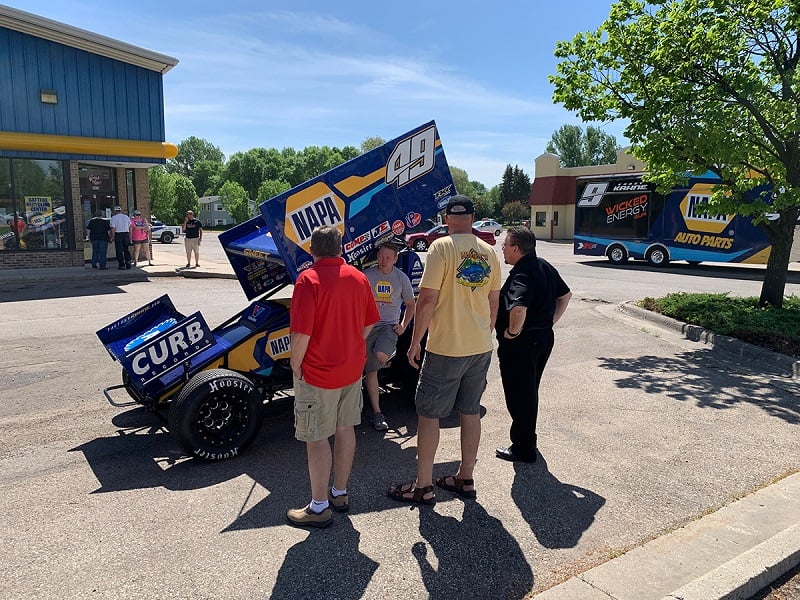 After a late draw, the NAPA team qualified 14th and had some work to do heading into their heat. In typical Brad Sweet fashion, the work got done, and Sweet was able to move up from his fifth-place starting position to win his heat in just eight laps, earning the team a spot in the dash. 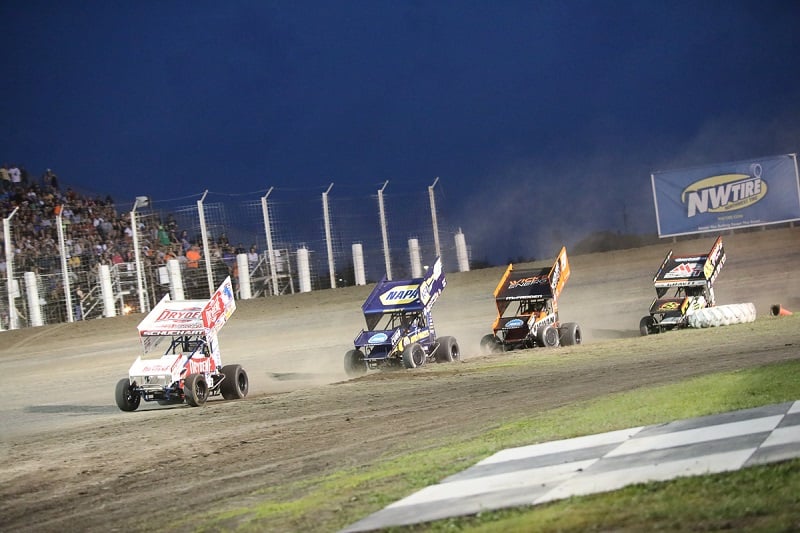 Sweet finished second in the dash, giving the No. 49 team the second starting spot for the 40-lap feature. At the green flag, Sweet settled into the second position as leader Logan Schuchart rocketed out to an early lead. The first caution flew on lap ten, bunching the field back up. A heated battle for the top five positions ensued. The low line was the place to be early in the event, but Sweet shot to the high side, working in the top. Sweet, McFadden, Logan Schuchart, and David Gravel battled for the top spot after a handful of additional restarts in a caution-filled race. As the checkered flag flew, Sweet finished third, right behind his KKR teammate McFadden and eventual winner Schuchart.

The final World of Outlaws event of the week was held on Saturday at Granite City Speedway in Sauk Rapids, Minnesota. Before watching the race from their very own section in the grandstand, 150 NAPA guests enjoyed private hospitality, a meet and greet with driver Brad Sweet and a hauler tour. It was the perfect night to support the Kasey Kahne Racing team as Sweet went on to earn his third victory of the season while claiming the World of Outlaws points lead. 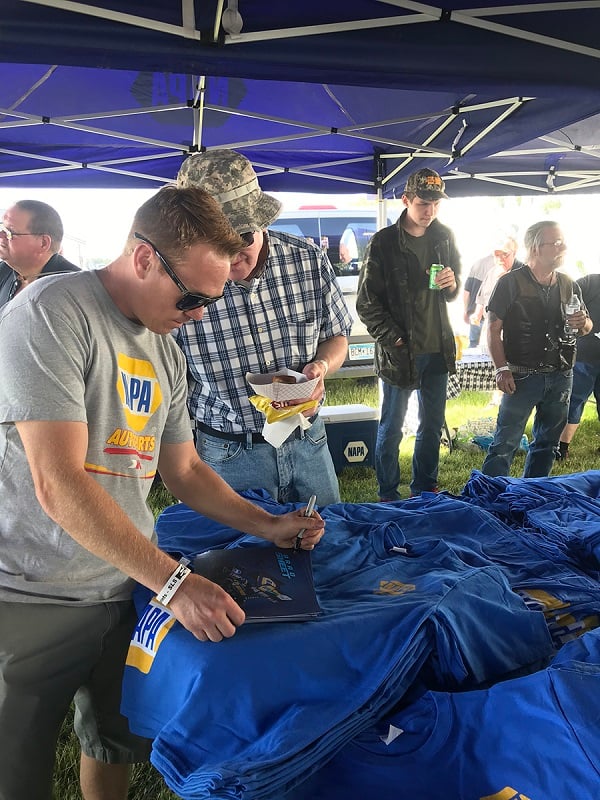 To kick off the evening, Sweet was fast in practice and qualified sixth-fastest. After a pair of second-place finishes in his heat race and the dash, he started the feature from the outside of the first row.

When the green flag flew, Sweet jumped out to a four-second lead. As the race neared its halfway point, Sweet was deep in lapped traffic when the caution flew with only ten laps remaining, setting up an exciting finish. 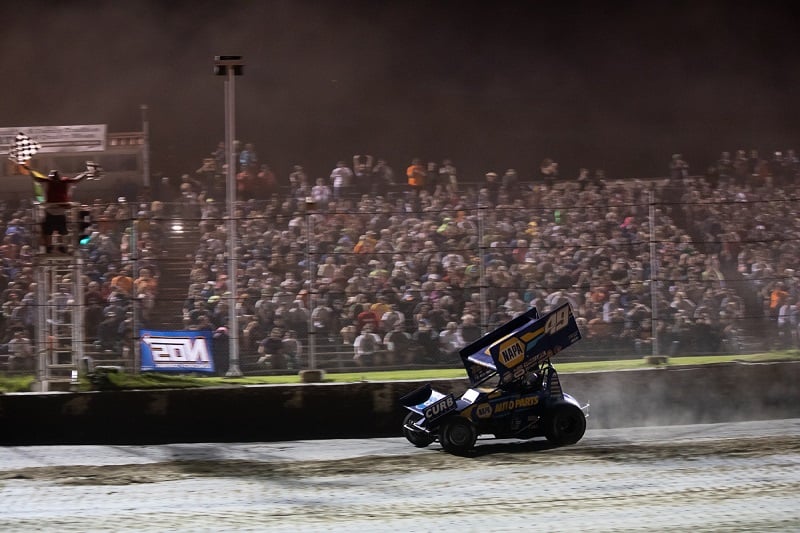 On the ensuing restart, Gravel stole the lead from Sweet in turn one, but Sweet stayed right on Gravel’s tail for the next handful of laps. As the laps wound down, the groove in turns three and four moved higher and higher, eventually causing multiple cars to bump the outside wall with their right-rear tire. Gravel eventually grazed the wall, allowing Sweet to close, nearly taking the lead into the next turn. 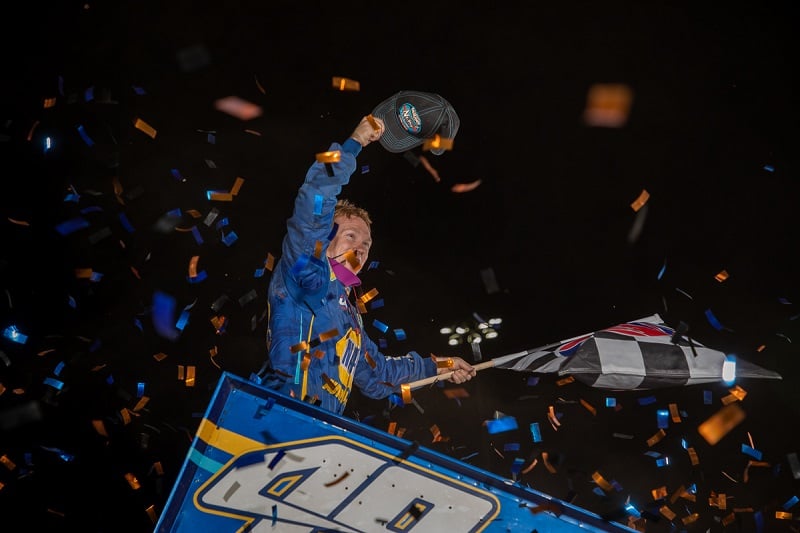 With six laps to go, Gravel tapped the wall again. Sweet capitalized and regained the lead into turn one. The very next lap, Sweet himself slapped the turn four wall with his right-rear, and Gravel again took over the top spot. Sweet battled back and yet again regained the lead off turn two. As they headed into turns three and four with only five laps remaining, Sweet shot to the low side and powered away off turn four. The final caution flew with only three laps to go, but Sweet got a great restart and was able to hold on to the lead to earn his third World of Outlaws victory of the season, as well as the points lead over ten-time series champion Donny Schatz.

“All you can do is try your hardest and sometimes when you over try bad things happen,” Sweet said in victory lane about having to rebound from hitting the cushion. “I thought we had the superior car, so I was frustrated with myself I was even in that position. But it played out right. You’re going to win some of those. You’re going to lose some of those. Luckily, tonight we got the win.”

The series returns to action at the famed Knoxville Raceway in Knoxville, Iowa, on June 14th and 15th.

Next Race: June 14, Knoxville Raceway (Knoxville, Iowa)
How to Watch or Listen: www.dirtvision.com