All three BMR team drivers battled competitively for a podium finish, but the thrilling end was due to the hard battle between the pair of NASCAR Next racers — 17-year-old Temecula, California, native Deegan and Kraus, the 17-year-old from Stratford, Wisconsin — during a two-lap, green-white-checkered finish on the 3/8-mile oval. Deegan (66 laps led) and Kraus (43) combined to lead 109 of the 150 event laps.

Deegan had her No. 19 Monster Energy / NAPA Power Premium Plus Toyota Camry in the lead on the final restart, but Kraus was able to slip to the inside in his No. 16 NAPA AUTO PARTS Toyota Camry and take the lead. He paid the price the following lap when contact from Deegan sent him spinning in Turn 3. She charged to the checkered flag to score the win, while Kraus recovered to finish eighth. 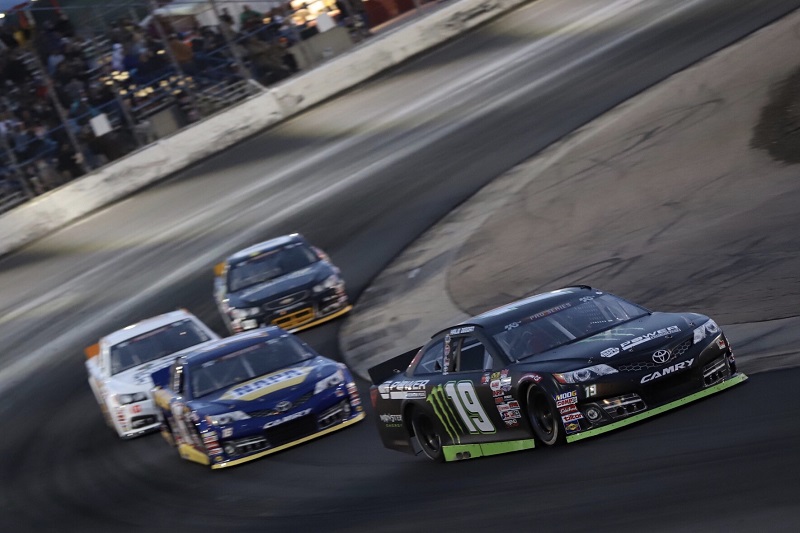 “We ran our hardest race, everything I’ve been practicing, all the hard racing I’ve been running,” Deegan said. “In the end, Derek ran me hard right there. So I was going to run him hard back. In the end, that’s racing. We were all going for the kill. In the end, I got the win. That’s all that matters.”

BMR’s Brittney Zamora, started second on the grid and battled among the leaders throughout the race in the No. 99 ENEOS / NAPA Filters Toyota Camry. The 20-year-old series rookie from Kennewick, Wash., finished fourth.

The three BMR drivers ran nose-to-tail, 1-2-3, through the middle laps of the race. Kraus – who started sixth – led over Zamora, and Deegan, who was fourth on the starting grid. After a competition caution on Lap 75, Deegan took the lead and paced the field as the laps wound down.

Despite the last-lap incident, Kraus was able to maintain his lead in the championship standings. Kraus has two wins and three top five finishes this season.

With the win, Deegan moved into second place in the standings – 12 points behind Kraus. She has two wins, one pole, and four top-five finishes in five starts.

Zamora is second in rookie points and fifth in the overall standings. She is 26 points out of first – with one pole, three top-five and four top-10 finishes.

BMR has won four of the five K&N West events this season. In addition to Colorado, Deegan also won the season opener at the Las Vegas Motor Speedway Dirt Track. Kraus swept both races of a doubleheader at Tucson Speedway.

The Colorado race will be televised to a national audience on NBCSN on June 13 at 3 p.m. (PST). The next event on the K&N West schedule will be on the road course at Sonoma Raceway on June 22.

Next Race: NASCAR K&N Pro Series West at Sonoma Raceway on June 22
How to Watch or Listen: NBCSN on June 13th at 3 p.m. (PST)