Brad Sweet and the NAPA AUTO PARTS Kasey Kahne Racing (KKR) team took on a triple-header over the weekend as the World of Outlaws traveled to Minnesota for the 42nd-annual Jackson Nationals. The team had high expectations at Jackson Speedway, a track where Sweet is a two-time Champion and has collected four feature wins. 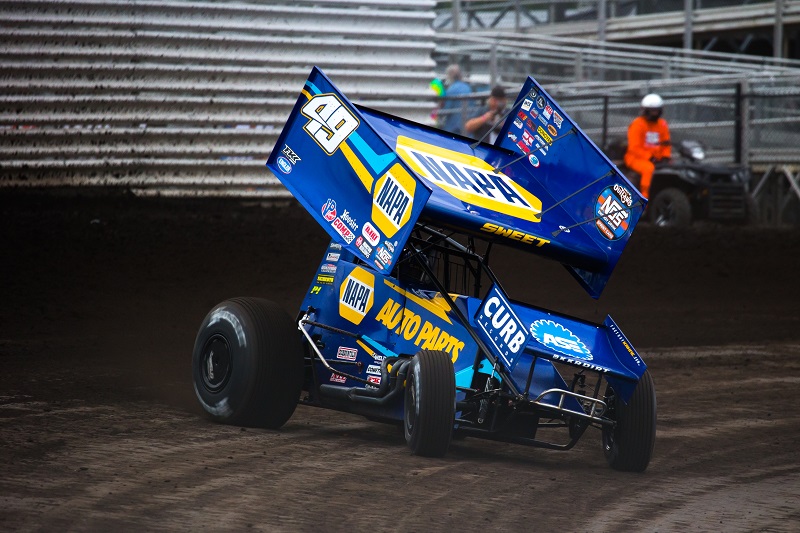 The first night of the Jackson Nationals kicked-off on Thursday when Sweet qualified 25th at the 4/10-mile track. The qualifying efforts lined the No. 49 car up seventh in the first ten-lap heat race of the evening. Sweet was able to drive his way to a second-place finish in his heat race, allowing the team to transfer to the Fast Pass Dash. An untimely rain shower moved into the area shortly following the heat races, forcing World of Outlaw officials to postpone the remainder of Thursday’s events. 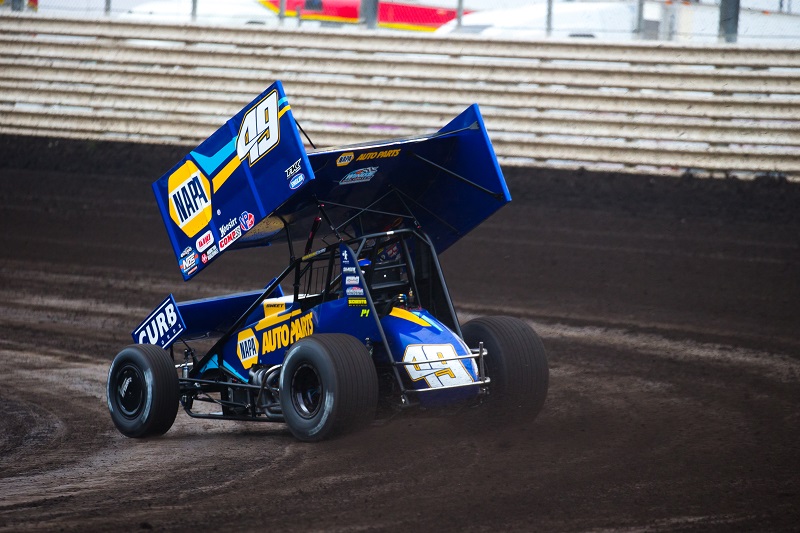 The racing action resumed on Friday with the Fast Pass Dash, where Sweet lined up in the third position. The No. 49 went on to finish second in the six-lap shootout, giving them an ideal front row starting spot in the feature. When the 25-lap feature went green, Sweet quickly took the lead by making a pass on polesitter Austin McCarl. After leading all 25 laps and pulling away from the field, the No. 49 car picked up the win in the first feature of the Jackson Nationals. 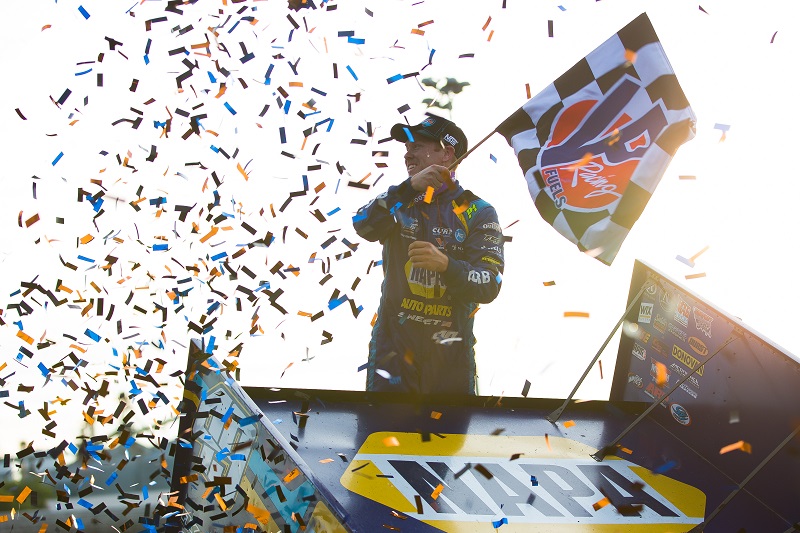 It was a quick turnaround for the NAPA AUTO PARTS team; shortly after their victory, the No. 49 car was back on track for the second round of the Jackson Nationals. With a lap time of 13.102 seconds, Sweet ranked sixth quick in qualifying. The qualifying effort gave the team a fifth-place starting position in their ten-lap heat race, which Sweet later went on to win. The heat race victory allowed the team to compete in the Fast Pass Dash, where they started sixth and finished in the fourth position. The 25-lap feature event went green, and Sweet maintained his fourth-place starting position on the initial start. It wasn’t long before he began challenging the third-place car for position on lap 2. Sweet completed the pass and set his sights on the leading cars of Logan Schuchart and Daryn Pittman. Schuchart secured the lead on lap 9 and continued to pull away from the field, forcing Sweet to settle with a third-place podium finish in the second feature of the Jackson Nationals. 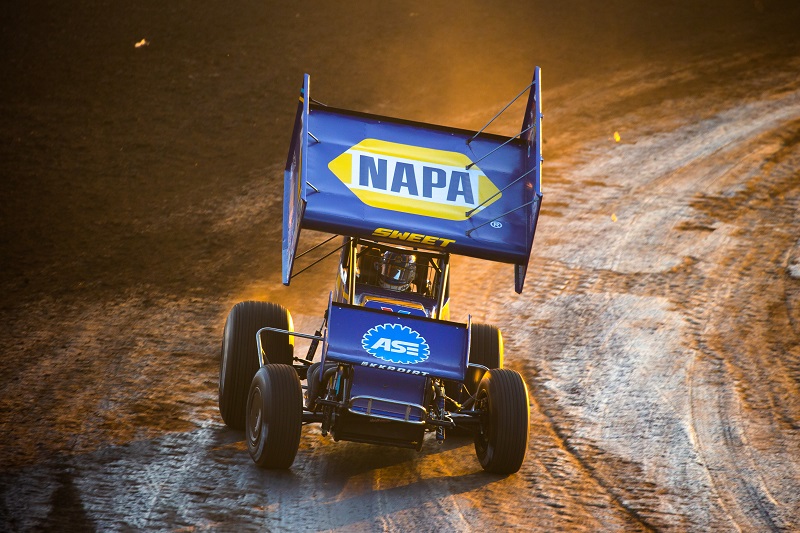 Sweet and the No. 49 team knew that they needed a victory on Saturday to secure another Jackson Nationals title. With a third-place rank in points, the No. 49 car was locked into the Fast Pass King of the Hill Dash and did not participate in the qualifying races. Sweet finished third in the Dash, giving the No. 49 team a third-place starting position in the 35-lap feature. The race went green, and Sweet maintained his starting position until the caution flag waved on lap 2. On the restart, he fell back to fourth place while the top three cars battled back and forth for the lead. A caution on lap 11 allowed Sweet to reclaim the third spot when the field went back to green. By lap 13, Sweet had made his way around the second-place car of Sheldon Haudenschild as the leader Logan Schuchart pulled away from the field. On lap 27, Sweet and Haudenschild made their way to the leader, creating a three-way battle for the lead. Sweet briefly claimed the top spot on lap 29, but Schuchart regained the lead and never looked back. Sweet and the No. 49 KKR team came away with a second-place finish in night three of the Jackson Nationals. 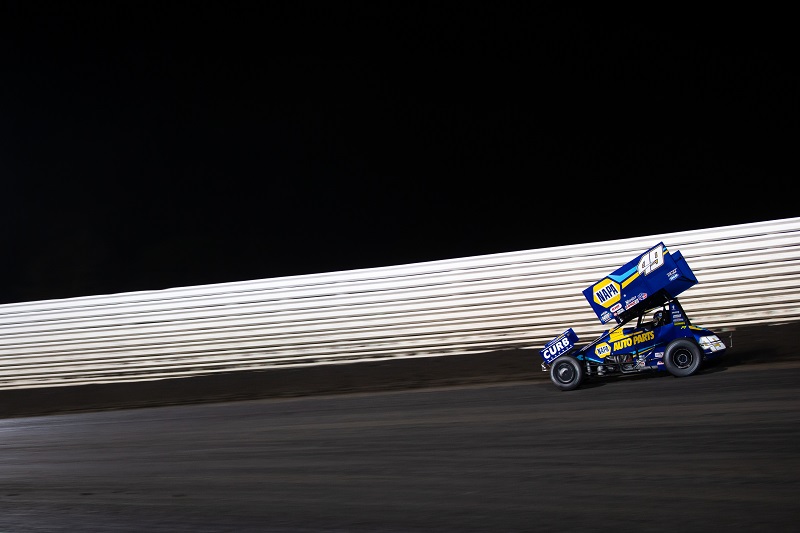 “I went really hard there in the middle of the race and used my one shot to get by Logan, and didn’t make it stick,” said Sweet. “There’s some nights you just can’t get it done. My NAPA AUTO PARTS team gave me a good car, and we’re all working hard every day. It’s competitive out here right now. We’ll take a second-place finish and try to get better next week.”

With three podium finishes during the Jackson Nationals, Sweet maintains his 66-point lead over Donny Schatz in the Championship point standings. So far this season the No. 49 KKR team has collected five wins, 14 top-five and 16 top-ten finishes in 17 races.