The No. 49 NAPA AUTO PARTS Kasey Kahne Racing team was a strong contender over the weekend in the Texas Two Step at Cotton Bowl Speedway in Paige, Texas. Brad Sweet extended his streak of podium finishes while collecting his 60th career World of Outlaws Sprint Car Series victory. 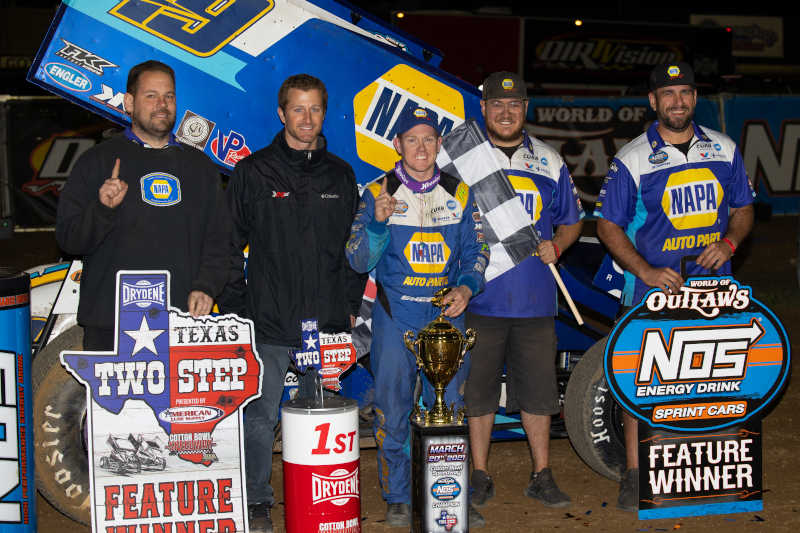 The No. 49 team was hungry for a win as they traveled to Texas this weekend. They unloaded for the first race of the doubleheader weekend and qualified fourth-quick out of 26 cars. This lined Sweet up to start from the second position in the first heat race of the evening. He was scored second when the checkered flag flew to end the eight-lap race. This allowed the No. 49 to advance to the Fast Pass Dash, where Sweet was given a fifth-place starting position during the random draw. Sweet started fifth and was able to avoid an early crash that took out two contenders. He restarted fourth and narrowly missed winning the fast pass dash, finishing second to Aaron Reutzel. 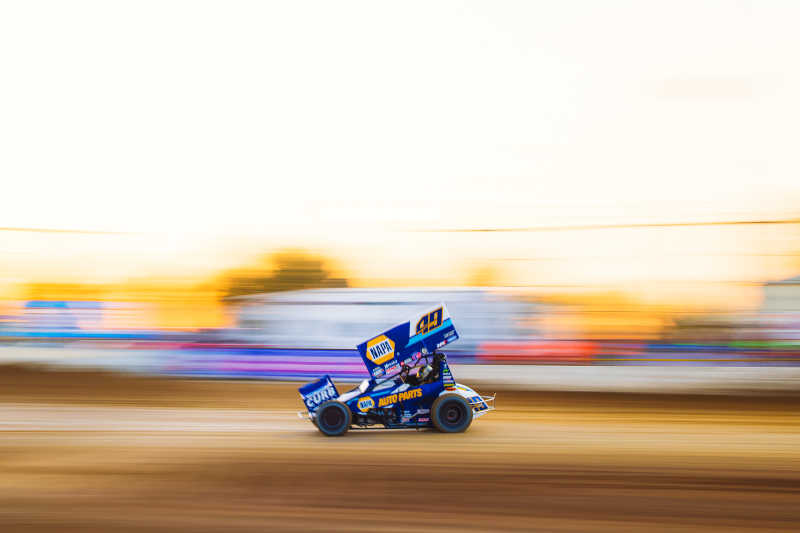 When it was finally time for the 35 lap feature, Sweet started from the second position. For the first 12 laps, Sweet followed in Reutzel’s footsteps before he was finally able to capture the lead on lap 13. Sweet pulled away from the field, but on lap 23, Sheldon Haudenschild made his way to the No. 49 car by using the top line. Haudenschild jumped to the lead with ten laps remaining, but the fight wasn’t over yet. With five laps to go, lapped traffic allowed Sweet and Reutzel to battle Haudenschild for the lead. After the three-car battle for the lead, Sweet settled into third-place and finished in that position. 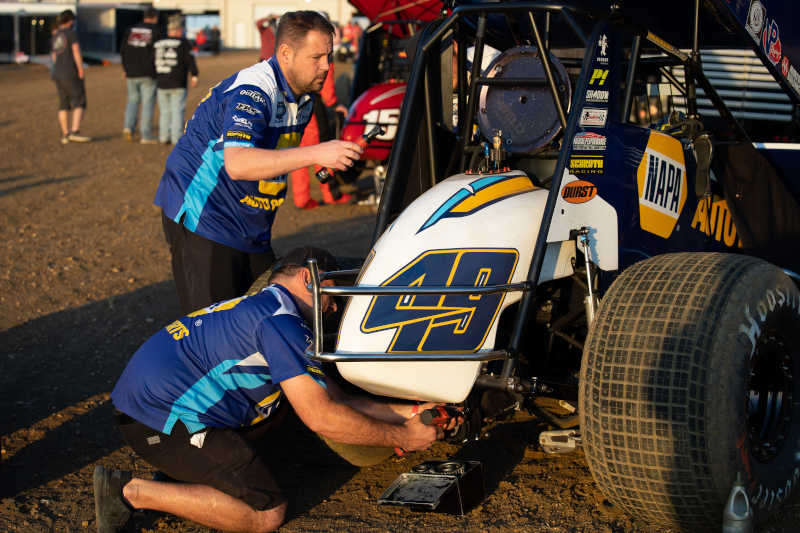 The NAPA AUTO PARTS team came back with vengeance for the final night of the Texas Two Step. Sweet set quick time during qualifying, laying down a blazing 15.091-second lap around Cotton Bowl Speedway. His qualifying lap was more than a half-second faster than his competitors. The No. 49 moved on to the eight-lap heat races where Sweet started and finished in the first position. The good luck continued as Sweet drew the Pole for the Fast Pass Dash. During the six-lap Dash, Sweet lost a spot to Cory Eliason, resulting in a start from the outside pole for the 30-lap feature. 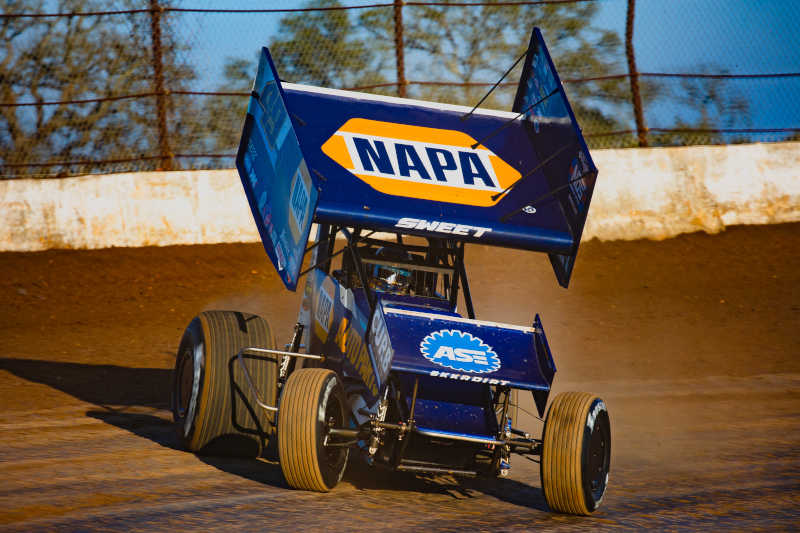 When the feature race went green, Sweet pulled away with a comfortable lead. He maintained that position until the leaders ran into lapped traffic on lap 11. Jacob Allen was able to complete the pass on Sweet for the lead, but one lap later he flipped entering Turn 1. The No. 49 inherited the lead once again with 18 laps to go. With 12 laps remaining, the leaders once again hit traffic, allowing the first four cars to all battle for the lead. Sweet was able to settle into first and pull away once they made it through lapped traffic. The drama picked up again with 4 laps remaining when lapped cars slowed Sweet once again. The second-place car of Brent Marks made his way to the No. 49 but couldn’t complete the pass. when the checkered flew, Sweet came away with this second win of the season. This improves the NAPA AUTO PARTS team record to seven top-five finishes with two wins in only eight races. The win also elevated Sweet to the top of Driver Point Standings. 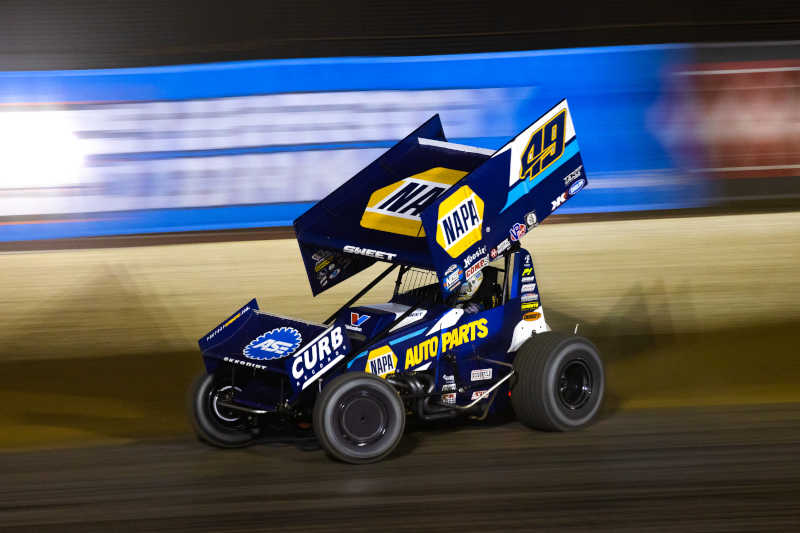 “We’ve been knocking on the door lately,” Sweet said after the race. “I think Jake [Allen] had the better car there, but he just made a mistake in lap traffic. It shows us we’ve still got to get a little bit better. I still fought some things with the car that I’d like to get fixed, but it is pretty cool to pick up my 60th win tonight. They’ve all come with Kasey Kahne Racing too, and we’ve got Kasey here with us tonight. I can’t thank him enough for the opportunity he’s given us. It’s been a fun ride so far, but it’s far from over. It’s always fun getting back in victory lane.” 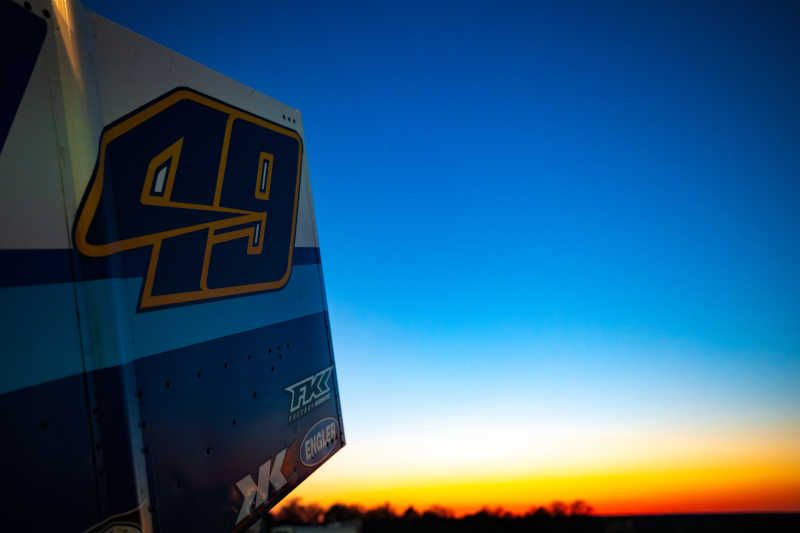 Next weekend, the World of Outlaws Sprint Car Series will head to the Midwest as they take on two races in the Show Me State. On Friday, March 26, the series will race at US 36 Raceway in Osborn, Missouri, before traveling to Lake Ozark Speedway in Eldon, Missouri, for the Jason Johnson Classic on Saturday, March 27.