Brad Sweet and the NAPA AUTO PARTS Kasey Kahne Racing (KKR) team were hitting on all cylinders over the weekend as the World of Outlaws Sprint Car Series took on US 36 Raceway and I-80 Speedway. 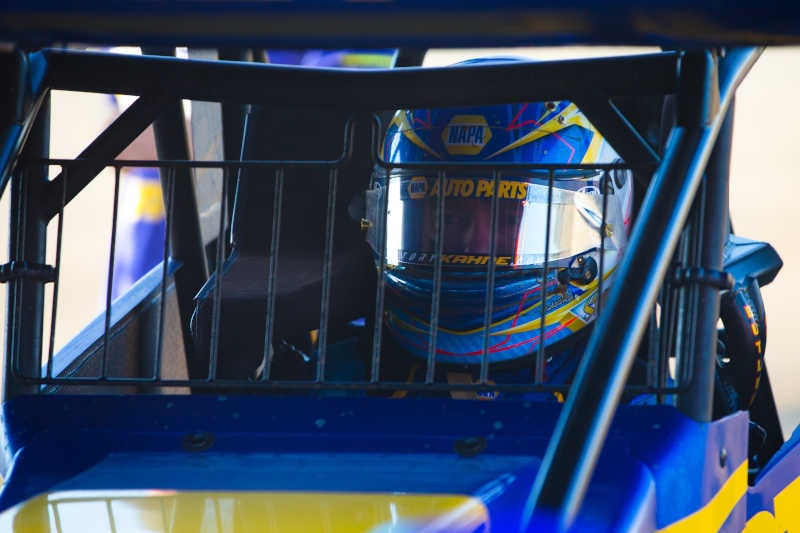 Sweet and the No. 49 team unloaded in Osborn, Missouri, on Saturday and quickly showed that they were going to be the team to beat. As the last car to make a qualifying lap, Sweet set quick time with a 10.892-second lap. This lined him up first in his heat race, where he took the lead on the initial start and never looked back. With the victory in his heat race, Sweet advanced to the Fast Pass Dash, where he drew a fourth-place starting position. On the last lap of the eight-lap shootout, the No. 49 car made a pass on Logan Schuchart for the win, earning a start on the pole for Saturday’s 35-lap feature. 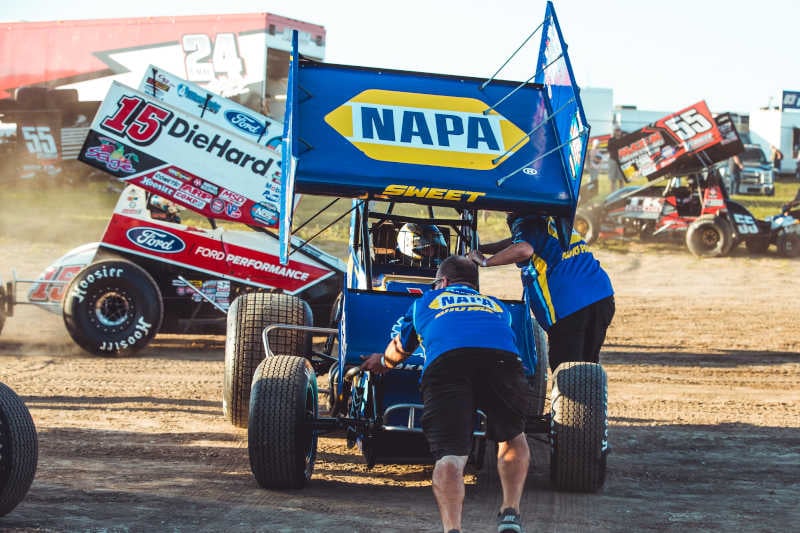 When the feature went green, Sweet jumped to an early lead. The leaders began lapping cars as early as lap five, which caused Sweet and Schuchart to swap positions as they each had issues working through traffic. A caution came out on lap 10, and when the field went back to green-flag racing, Sheldon Haudenschild took the lead. Sweet kept him in sight and was able to recapture the top spot with 19 laps to go. The No. 49 was extending the gap to the second-place car by a straightaway with ten to go, but Haudenschild didn’t give up. With Sweet leading on the final lap, Haudenschild made a pass stick on the last corner, beating the KKR car to the checkered flag. Even after a heartbreaking finish, Sweet earned a much needed second-place podium finish to kick off the weekend. 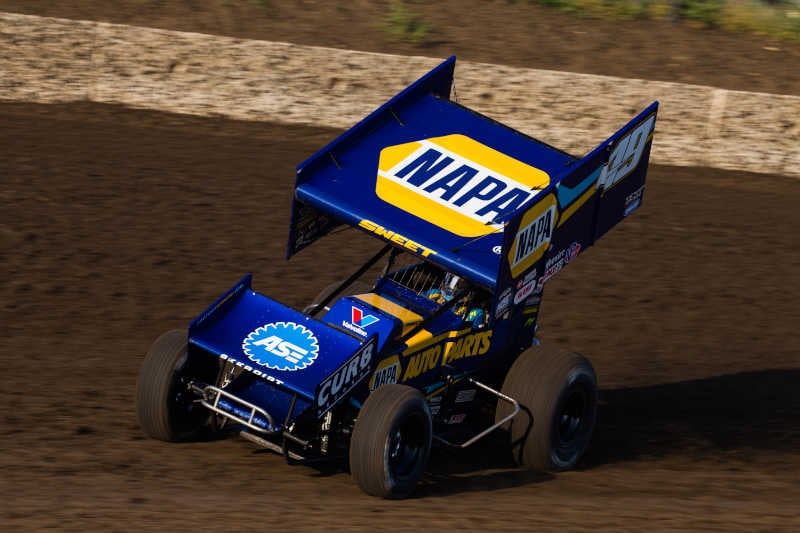 After what Sweet called a “devastating” finish the night before, he was determined to claim a victory on Sunday as the series traveled to Greenwood, Nebraska’s I-80 Speedway. The team had some work to do after being scored 12th-quick in qualifying. The No. 49 machine lined up third in the last heat race of the evening. Sweet gained one position during the eight-lap race, finishing second and advancing to the Fast Pass Dash. He drew a third-place starting position for the Dash but didn’t have much time to catch the leader with only six laps to race. As he battled for the second position, the race leader Jacob Allen pulled away, and Sweet settled with a runner-up finish and a second-position start in Sunday’s feature. 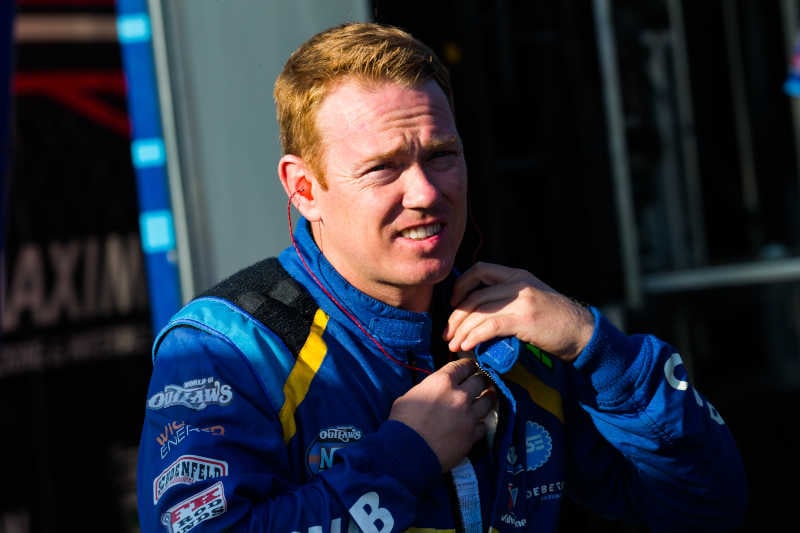 On the initial start of the race, Sweet settled into the third position. A caution came out on lap six, and Sweet was able to grab second place from Carson Macedo. Another caution occurred on lap 12 for a slowed car on the track. Knowing that he had to capitalize on the restart, the No. 49 car shot to the lead. Sweet held on to the top spot through lapped traffic and was cruising to the win with a four- second lead when the caution lights began flashing on the final lap. The pressure was on as the field was restacked for a green-white-checkered finish. Sweet got a great jump on the restart and pulled away from the field as he earned his eighth win of the season. 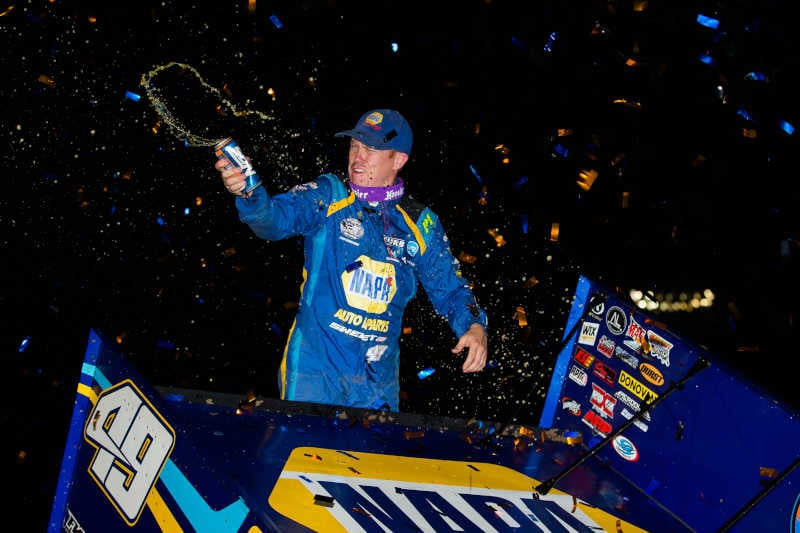 “I couldn’t believe, take the white flag and the caution comes out,” said Sweet. “It’s been some trying times, but this NAPA AUTO PARTS team never gives up. We’ve gone through DNFs and race cars and wild crashes. You know, things that we’re not accustomed to. But that’s the adversity of the World of Outlaws tour. Never giving up and trying to stay positive each and every night. We lost a heartbreaker last night, so it is really easy to get down and get frustrated. But instead, we came back here and got the car better and better all night.” 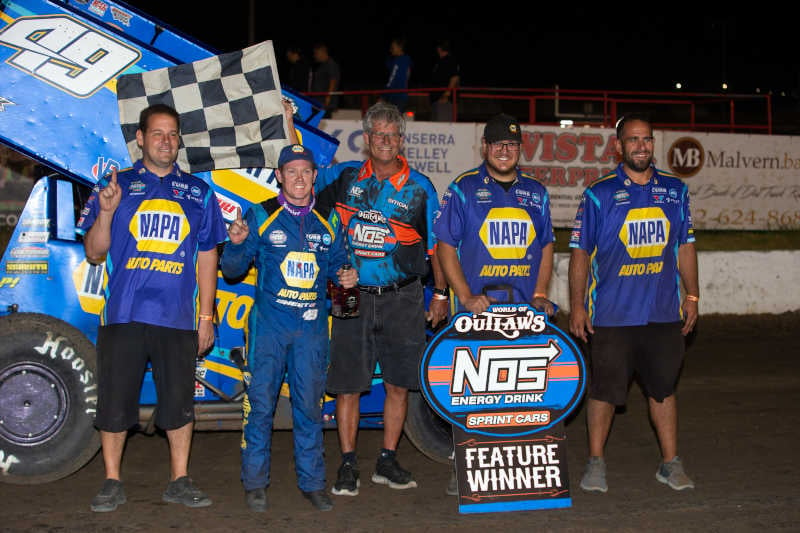 As we’ve seen for several weeks, the Championship Points battle continues to be a tight race between Sweet and Schuchart. After earning a first- and second-place finish over the weekend, the NAPA AUTO PARTS driver has made progress and now sits in a tie for the top spot. Both drivers will look to claim the top seat in the standings as the World of Outlaws Sprint Car Series travels to Huset’s Speedway in Brandon, South Dakota, for a races on both Saturday and Sunday.

Next Race: Sept. 6-7, Huset’s Speedway, Brandon, SD
How to Watch or Listen: www.dirtvision.com