Brad Sweet and the No. 49 NAPA AUTO PARTS team had a big week on tap with four consecutive nights of racing at Huset’s Speedway in Brandon, SD,  for the High Bank Nationals. Wednesday night was a makeup event from being rained out back on June 5th. With 46 cars signed in, the Big Cat was set to qualify sixth in Flight B. Hitting the charts at 10.805 seconds placed him fourth in Flight B. The No.49 then started outside the pole (second) in Heat Race #4; Sweet held onto second, punching his ticket to the Fast Pass Dash. Sweet was the last to draw and ended up with the eighth starting position, which is where he finished after a short six laps. The team had some work to do in terms of adjustments. 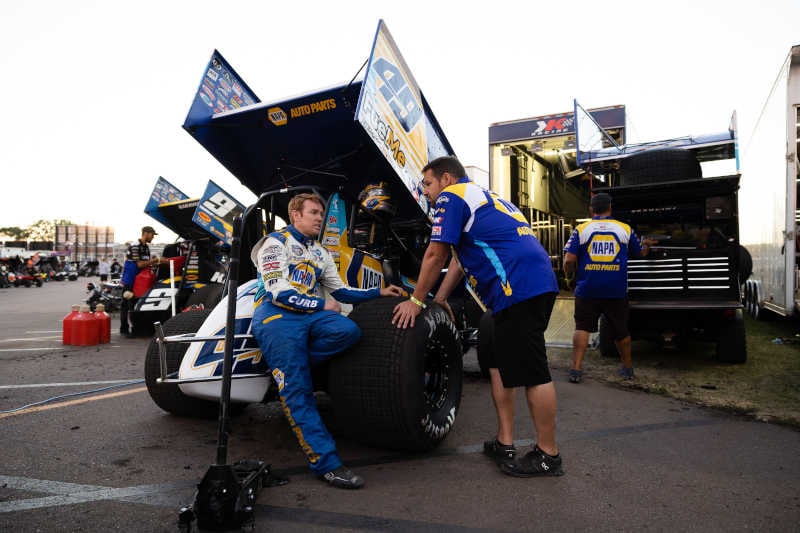 At feature time, Sweet rolled off in the eighth position. When the 30-lap race went green, the high-banked track provided fast speeds and multiple lines. After going to battle with a stout field, the No.49 jumped the cushion, losing two spots. Sweet soon made a charge back toward the front to bring the NAPA AUTO PARTS home in seventh. 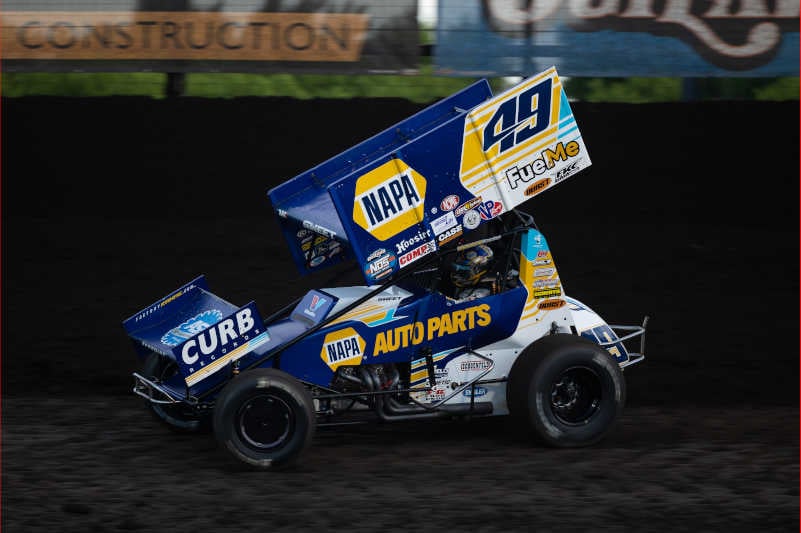 Thursday officially brought the first night of the High Bank Nationals. As a points event, the High Bank Nationals have a bit of a different format. Sweet drew the 19th pill in Flight A qualifying, stopping the clock at 11.070 seconds and placing him seventh overall. Slated to start fourth in Heat Race #1, the No.49 team knew they needed to make a charge forward. As heat race competition was underway, Sweet tried everything he could to get by, but being caught in “dirty air” resulted in less downforce than he needed to get better traction. Sweet held onto a fourth-place finish, placing him in 16th to start the A-main. 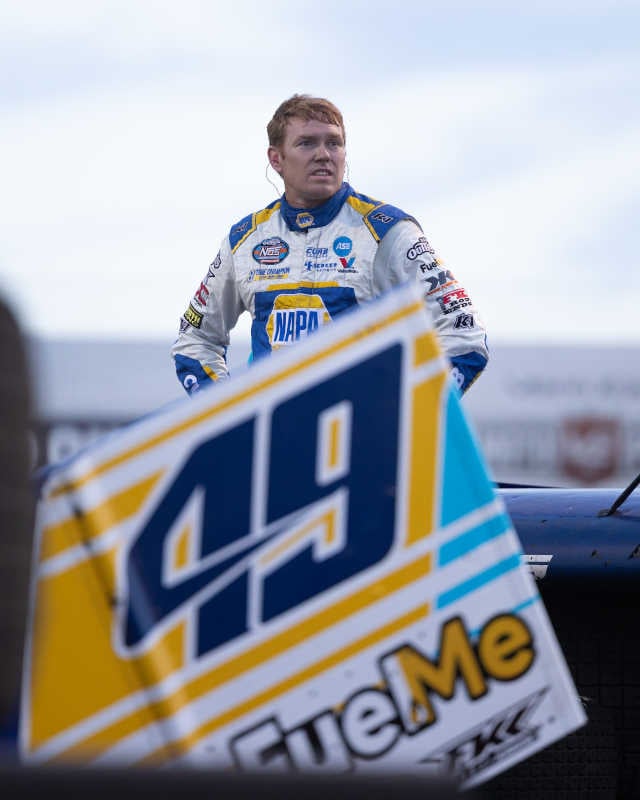 Once the field went green, a group of cars checked up coming out of Turn 2, causing Sweet to overturn the No.49 while other competitors had nowhere to go and crashed straight into him. They immediately took the No. 49 to the work area, where the NAPA AUTO PARTS team thrashed and made repairs in under 2 minutes. The field went green again, and Sweet managed to bring the 49 home in 14th. 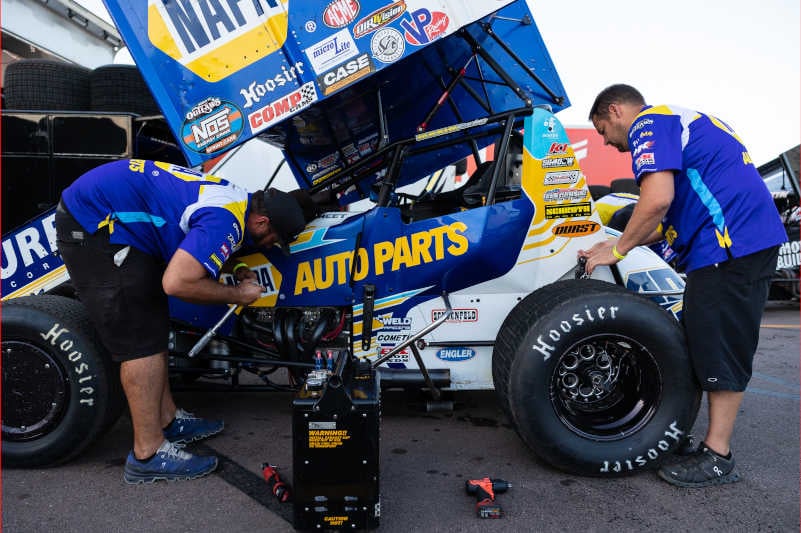 On Friday, the NAPA AUTO PARTS team built a new car for the Big Cat to start fresh. The No.49 was scheduled to qualify 12th, where Sweet hit the charts at 11.110 seconds, placing him fifth in Flight A. In heat race action, the Big Cat was slated to start fifth. Once the race went green, the No.49 proved to be a rocket. Maneuvering the track surface, Sweet passed two competitors, bringing the No.49 across the checkers in third. Because of the point-based format, the NAPA AUTO PARTS was scheduled to roll off third in the A-main. 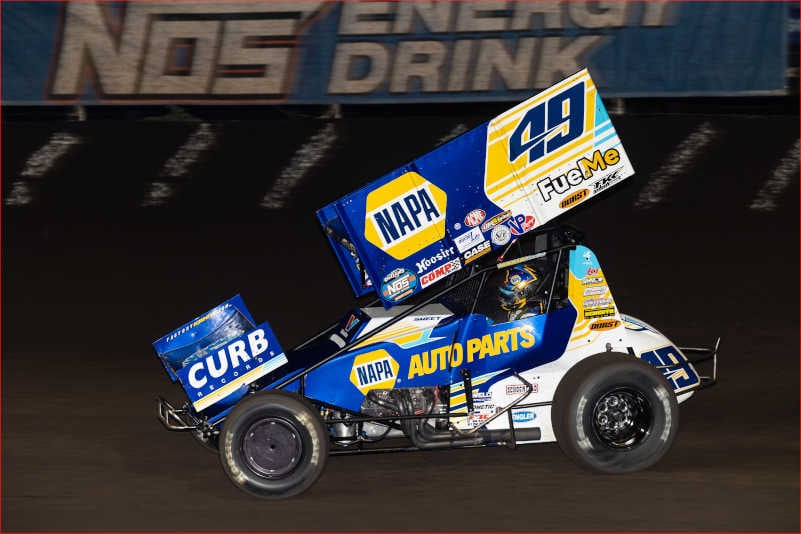 When the green flag dropped on the $20,000-to-win race, Sweet had a setup to win with great speed through the turns. Unfortunately, only a few laps in, fourth-place runner Rico Abreu came down on Sweet in Turn 3, causing him to flip wildly. When most teams would consider that an end to their night, Sweet quickly got back in the car, and the No. 49 headed to the work area. The second the car rolled in, the NAPA AUTO PARTS team quickly started working, replacing a front axle, shocks, nose wing and top wing within just a few minutes. The No. 49 was sent back out, Sweet determined to get back to the front. Finishing the 35-lap race, the Big Cat brought the No. 49 home in 11th place after restarting at the rear. 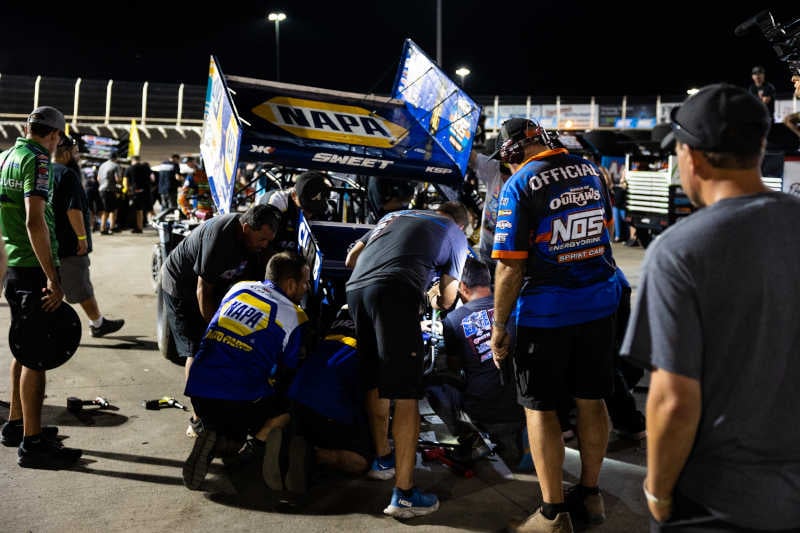 Saturday brought the final night of the Huset’s High Bank Nationals, with a payday of $100,000 to win. With Thursday and Friday’s combined points, Sweet was slated to start second in Qualifier #1. With ten laps the distance and the top four transferring, it was go time. At the drop of the green, Sweet battled with McFadden for the lead, but McFadden had the line advantage. Sweet settled into second place and remained there until he crossed the checkers. Next up was the big dance. 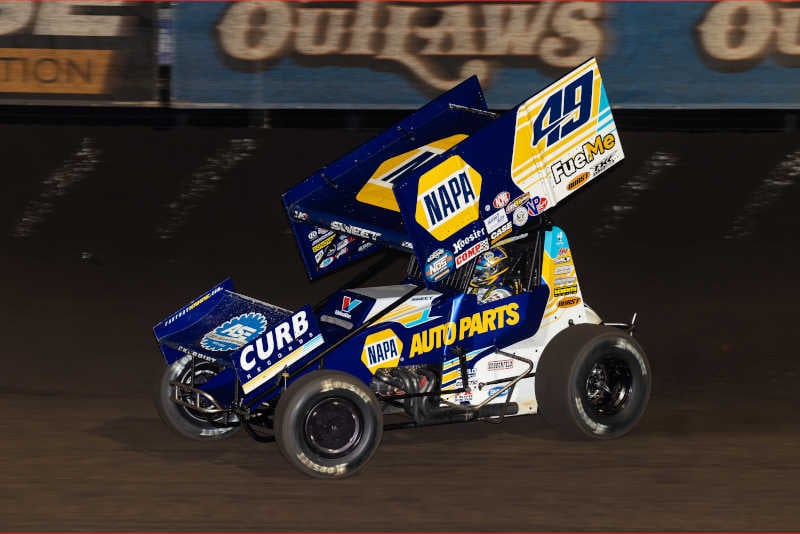 The final race of the High Bank Nationals was slated for 40 laps,  with 24 cars competing and $100,000 on the line. Once the field went green, drivers were slicing and dicing for positions, everyone hungry for the big payday. The NAPA No.49 was charging forward through the heavy traffic with Sweet making his way up to sixth. A mid-race caution led to the field having to restart side-by-side. After the field went back green, two competitors in front of Sweet were battling towards the top side of the track, allowing the NAPA driver to pass both cars in one corner. Running in the fourth position, another caution was displayed. On the restart, Sweet spun the tires, which gave the two competitors behind him the opportunity to pass back by. The NAPA No.49 officially came home in sixth position. 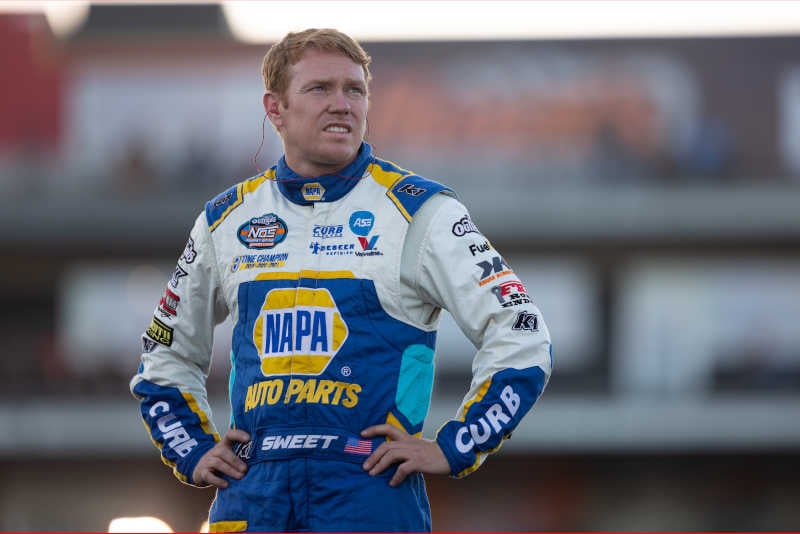 After a long and grueling weekend, the NAPA AUTO PARTS No.49 team was resilient in the face of adversity. Their endless efforts showed what a championship team is made of as they held onto the points lead. The team will spend the week regrouping and building a new car for the Independence Day Spectacular at Cedar Lake Speedway.