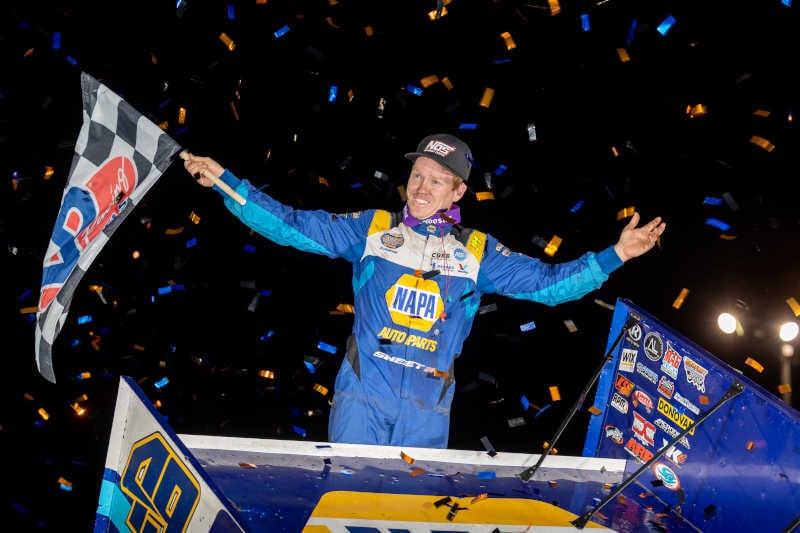 Sweet started the weekend off on the right foot when he laid down a 10.112-second qualifying lap, ranking fourth out of 29 cars Thursday at Jacksonville (Ill.) Speedway. After lining up on the outside pole for the ten-lap heat race, Sweet settled into second on the initial start and also finished in that position, which allowed the No. 49 team to advance to the Fast Pass Dash. During the random draw, Sweet drew a two, lining him up on the outside pole once again. When the green flag flew to start the Dash, Sweet jumped in front of Sheldon Haudenschild, took the lead, and won the pole for Thursday’s Feature. 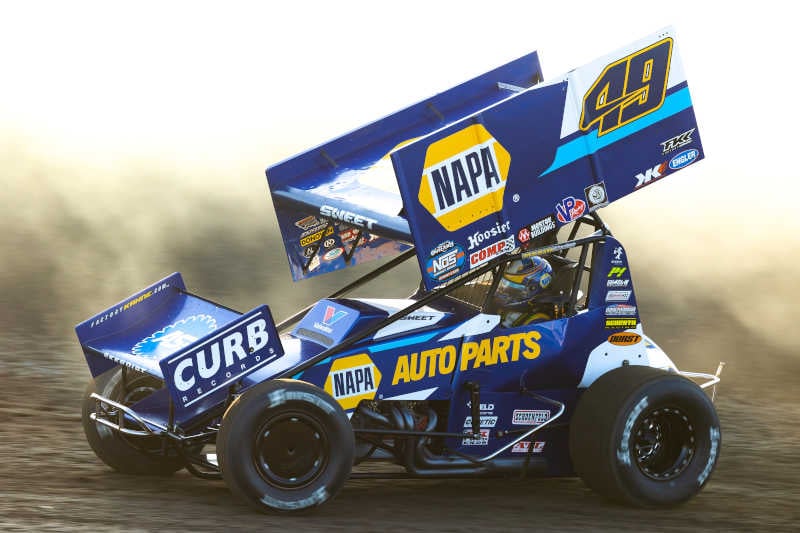 But when the 40-lap race started, Sweet lost the lead to Haudenschild on lap one. Sweet recaptured the top spot during a restart on lap nine and led for the next 19 laps. Haudenschild once again took over the lead just as the caution came out with 11 laps to go. He maintained the lead on the restart, but a flat tire for Haudenschild allowed Sweet to become the leader once again. On the restart, three cars battled neck and neck for the lead  until one  wrecked, bringing out another caution. Sweet jumped back out to the top spot and took the white flag when the caution flag waved once again. It was a green-white-checkered finish with three cars battling to the line. Sweet crossed the line with a 0.19-second advantage, collecting his sixth win of the season. 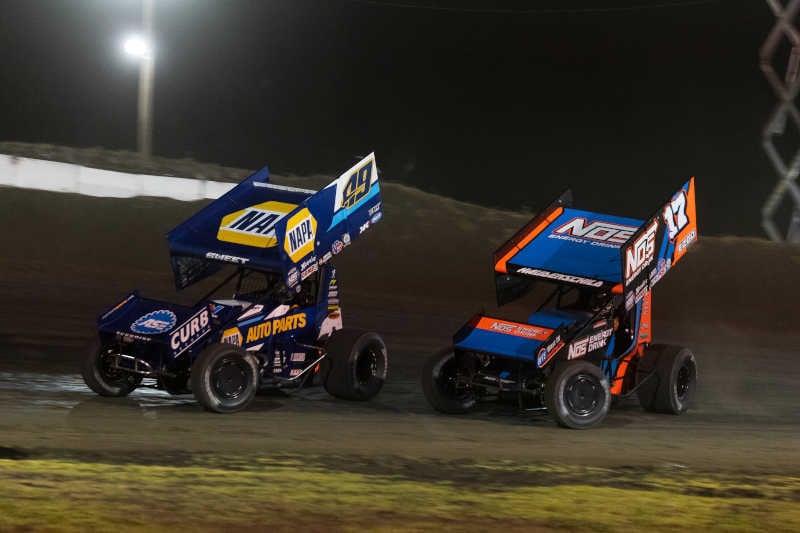 On Friday, the World of Outlaws returned to the newly renovated I-70 Motorsports Park in Missouri, and it’s grand re-opening did not disappoint. The No. 49 team qualified ninth-quick out of 29 cars, lining them up third for the eight-lap heat race. Sweet started third and finished in that same position, narrowly missing the Fast Pass Dash, lining him up ninth of the start of the 30-lap Feature. 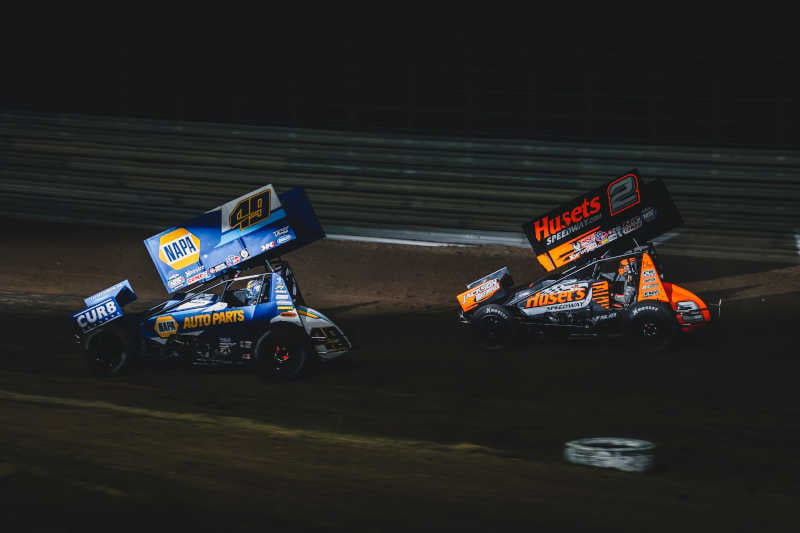 Once the green flag flew, Sweet was quietly racing within the top ten. On lap 13, Sweet made his appearance known as he secured the pass for the third position and quickly made his way to the leaders. With 11 laps remaining, Sweet took over the second spot and had his sights set on the leader, David Gravel. He made his way to Gravel and captured the lead with six laps remaining. With three laps to go, the caution flag waved. Sweet had a great restart and set himself up for another trip to Victory Lane on Friday night. 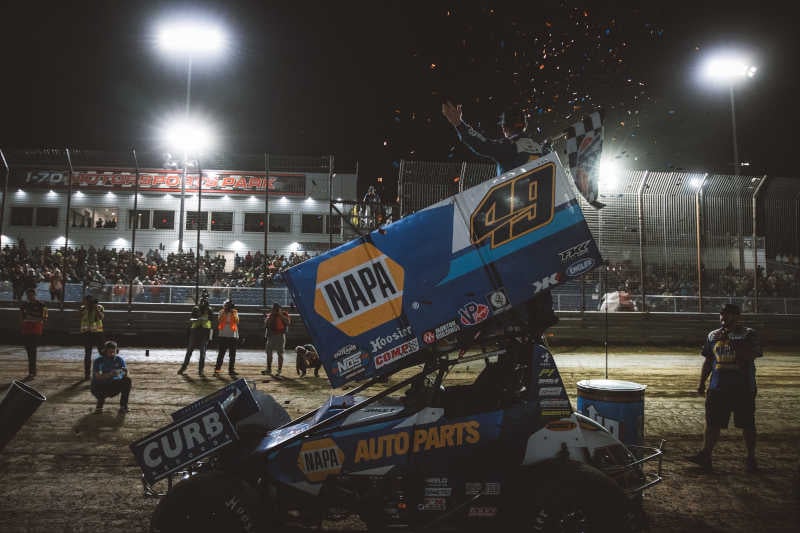 “This NAPA Auto Parts team never gives up,” Sweet said. “We know sometimes you’ll have to come from mid-pack, and others you’ll start on the front row. It’s always a little sweeter doing it from farther back. We’ve struggled on the half-miles this year, so that’s a nice bonus too. This was a pretty cool place for my first trip here. Awesome crowd, great racetrack, incredible facility. Excited for tomorrow.”

On Saturday, Sweet qualified seventh, posting a 13.848-second lap around the half-mile track. He started third in the heat race and was able to advance one position to move on to the Fast Pass Dash. After the random draw, Sweet started the Dash from the fifth position and went on to finish fourth. Saturday’s Feature was 30 laps in length, and Sweet would start from fourth place.

Early in the Feature, Haudenschild jumped out to a dominant lead while Sweet spent many laps in third, battling for the runner-up position. Everything changed when a caution came out with three laps remaining. Sweet lined up beside Haudenschild on the restart. Another strong restart allow him to capture the top spot and win for the third consecutive day.

“We’ve still got a long summer ahead of us with a lot of big races left,” Sweet said of their early-season success. “We’ve got to keep our heads down, keep capitalizing, keep executing, and keep winning. We’re the best team out here and I feel like I’m at the highest level I’ve ever been at as a driver. I want to win as many as possible this year.” 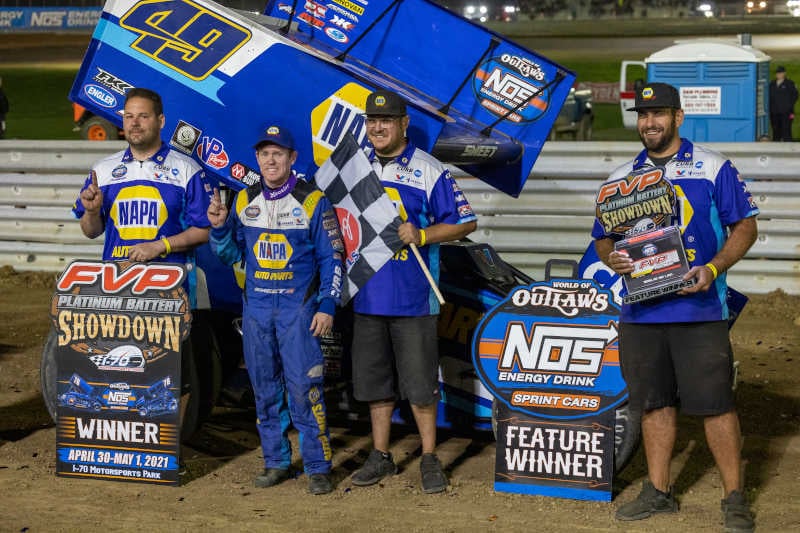 Sweet has now won eight times in 17 races and increased his Championship Points lead to 72 points over Gravel. The World of Outlaws Sprint Car Series will head to the famed Eldora Speedway in Rossburg, Ohio, next weekend, May 7-8, for the #LetsRaceTwo double-header.

Next Race: May 7-8, Eldora Speedway, Rossburg, OH
How to Watch or Listen: www.dirtvision.com