Brad Sweet, driver of the No. 49 NAPA AUTO PARTS sprint car, extended his points lead in the World of Outlaws Sprint Car Series Saturday with a win at Williams Grove Speedway. It was Sweet’s first win at the Mechanicsburg, Penn., track and the second of the season for the No. 49 team. 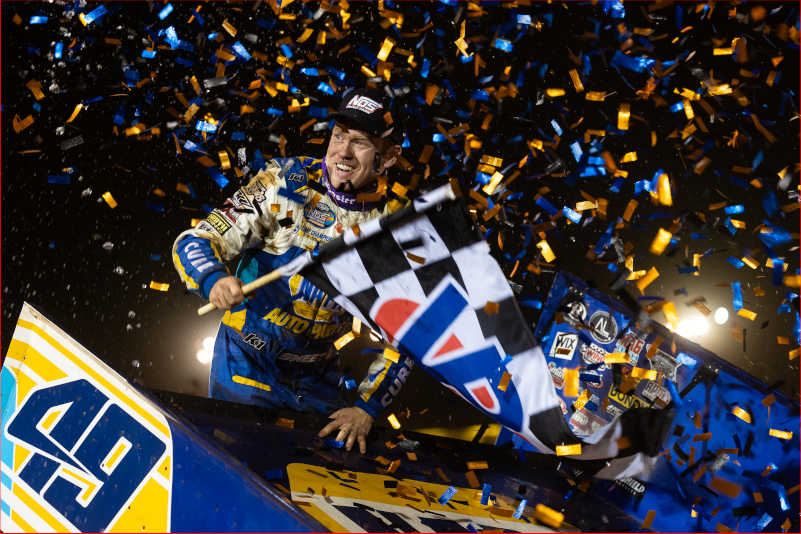 After just three days off following a five-day stint of racing, the World of Outlaws  arrived at Port Royal Speedway in Pennsylvania on Wednesday for a $20,000-to-win, mid-week show. With 33 cars signed into competition, Sweet drew the 16th pill for qualifying. His qualifying time of 17.086 seconds placed him eighth overall and slated the No. 49 to start second in Heat Race 4. 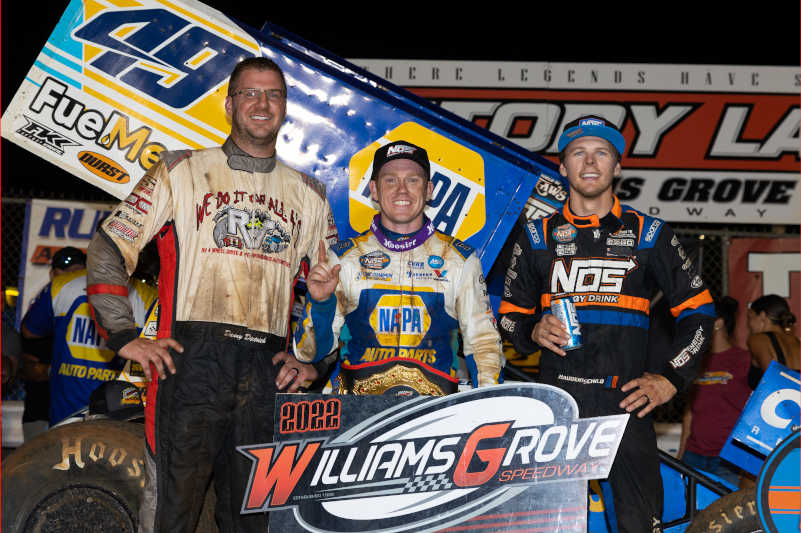 Sweet jumped out to the early lead in his heat race but had only a few car lengths on second and third place. With only two laps to go, second-place runner Danny Dietrich closed in on the Big Cat. On the last lap, Sweet went high while Dietrich went low. Dietrich pulled ahead of Sweet and won Heat Race 4 by just .024 seconds. The NAPA AUTO PARTS No.49 still punched their ticket to the Fast Pass Dash. During drawing, Sweet drew the #3 pill and assessed the track conditions.

“It’s slick out there with long straightaways,” Sweet said.

The six-lap Dash was up next. As the flagman dropped the green, Sweet had a strong start but gradually fell back. By the end of the Dash, he fell back to eighth position. However, this allowed the NAPA team to work on their setup while gaining some extra laps. Next up was the 30-lap  A-main event. The No.49 has previously struggled at the 1/2-mile of Port Royal Speedway but hoped to turn it around. As the caution lights went out, the green flag waved on the feature race. 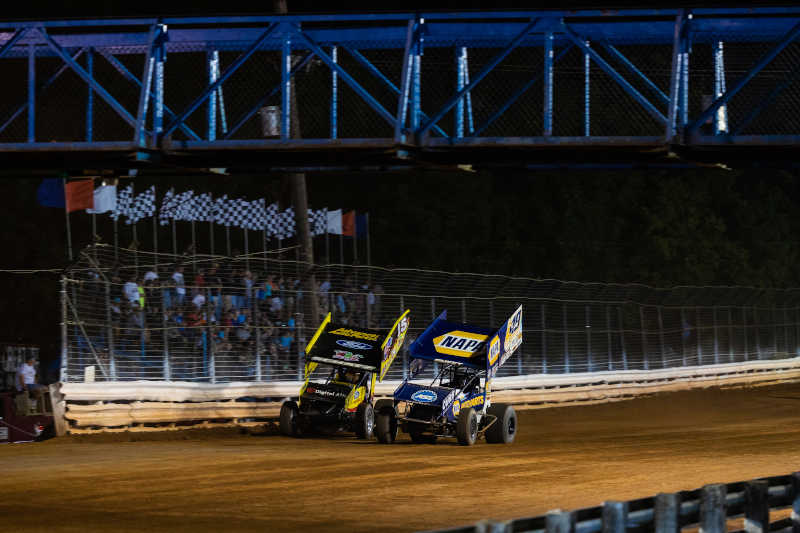 The NAPA AUTO PARTS car had a strong setup with the ability to run the top or the bottom. Racing mid-pack, Sweet had difficulty finding clean air with competitors running multiple lines up front. Nearing the end of the race, he slowly started falling behind as track conditions began to change quickly. Sweet brought the NAPA AUTO PARTS car across in 13th position. 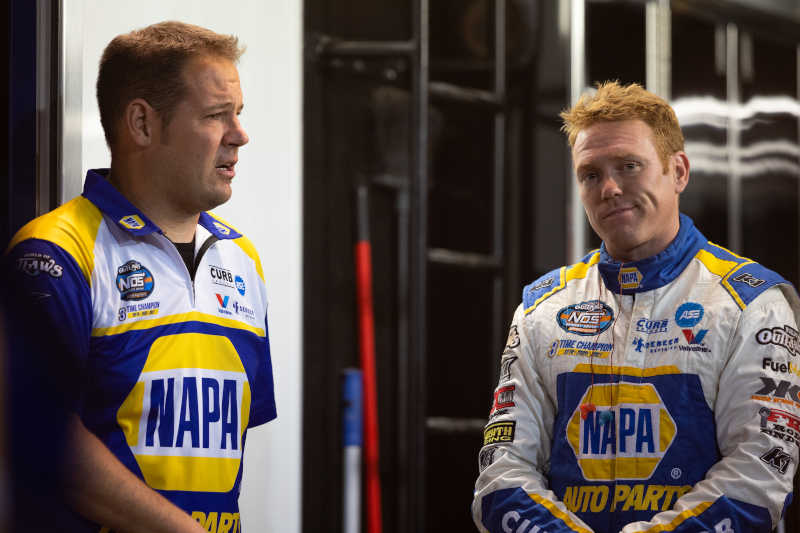 Friday and Saturday hosted the Champion Racing Oil Summer Nationals at Williams Grove Speedway, a track that has proven to be difficult for the No. 49 team. With 36 cars signed into competition on Friday, Sweet was slated to qualify 10th. Stopping the clock at 17.440 seconds, the Big Cat was second overall, leading him to start first in Heat Race 2. As the field went green, Sweet immediately jumped to the first position, running the low line. His second-place competitor David Gravel tried multiple times to pass for the lead, but the NAPA No.49 was too good. Sweet held on for the heat race win, claiming his ticket to the Fast Pass Dash. 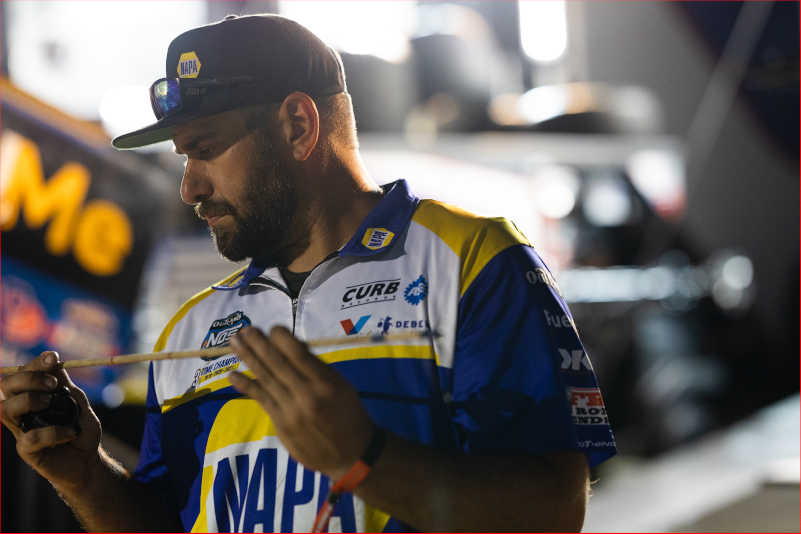 Drawing the #5 pill, Sweet stated, “It’s a tricky race track. Long straightaways, tight corners, it doesn’t fit the way my driving style necessarily works. But, I’ve been working at it, trying to get better.” 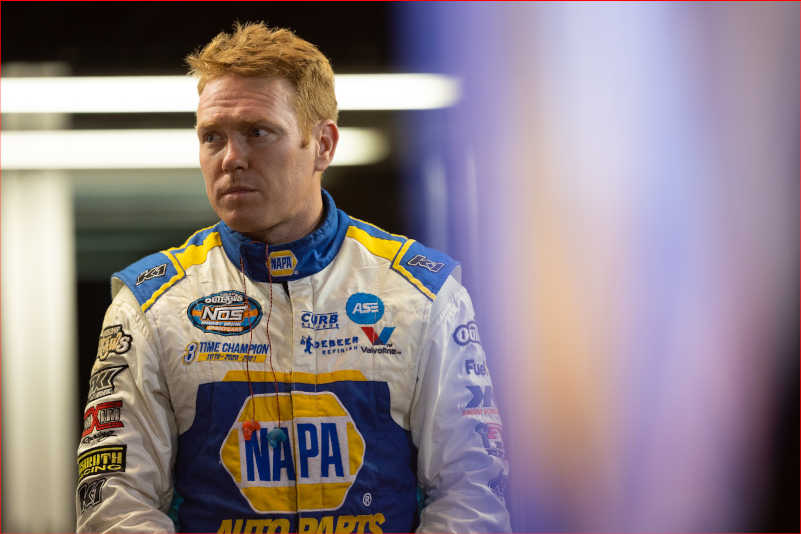 With six laps the distance, the Dash went green. Sweet fell back to sixth but soon found the low line on the race track and started making gains forward. On lap 2, the No.49 made a pass for fifth but wasn’t done there. With 4 laps down and 2 to go, Sweet caught up fourth-place runner Lance Dewease and quickly passed him. Finishing fourth in the Dash placed Sweet to start from fourth in the feature.

With 25 laps the distance, the stage was set for the Outlaws to battle the PA Posse at Williams Grove. When the green flag waved, Sweet was charging and quickly jumped to third. Staying close to the second-place runner, the Big Cat waited for the perfect moment to make a move. Heading into turns 3 and 4, the NAPA No. 49 initiated a slide job to pass Anthony Macri for second and made it stick. With 13 laps to go, Sweet began stalking the leader Brent Marks and closed to within three car lengths. Sweet attempted a slide job on the lower line but couldn’t make it stick. A late race caution then erased the distance Sweet had built between himself and Dewease in third. On the restart, Dewease made the pass on Sweet, and on the last corner of the last lap, Macri took third when Sweet drove over the cushion a bit too much. Sweet officially brought the NAPA No. 49 home in fourth. 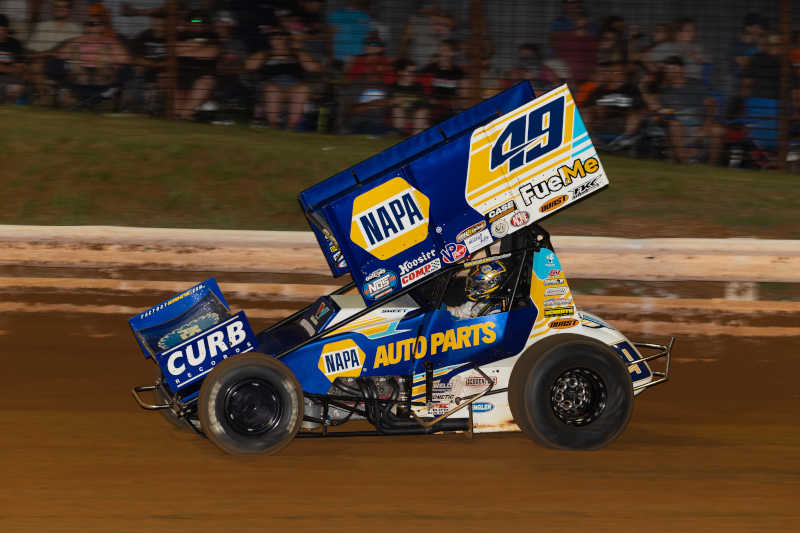 Saturday brought the final night of the Champion Racing Oil Summer Nationals. Coming off a solid run the previous night, the NAPA AUTO PARTS car was ready to compete for the top prize of $20,000. Out of 35 cars signed into competition, Sweet was scheduled to qualify 13th. Hitting the charts at 17.398 seconds, the Big Cat was fourth overall. This slated him to start first in Heat Race 4. At the start of the heat race, Sweet’s second-place competitor had the advantage and jumped out to the early lead. Following the same line, the No.49 was working to catch the leader but needed a little more out of the track surface. With three laps to go, Sweet closed in enough to attempt a pass on the low line but just couldn’t quite get there. He made another attempt to pass, but the checkered flew. Sweet officially crossed the line in second, punching his ticket to the Fast Pass Dash.

Sweet drew the #5 pill yet again for the Fast Pass Dash, but this was the perfect chance to improve the No. 49’s setup for the A-main. After the flag man dropped the green on the six-lap Dash, Sweet grabbed fourth place early on as they raced down the front stretch. The Big Cat then began to stalk third-place runner Dietrich. With two laps to go, he made the pass on Dietrich and ultimately finished third. 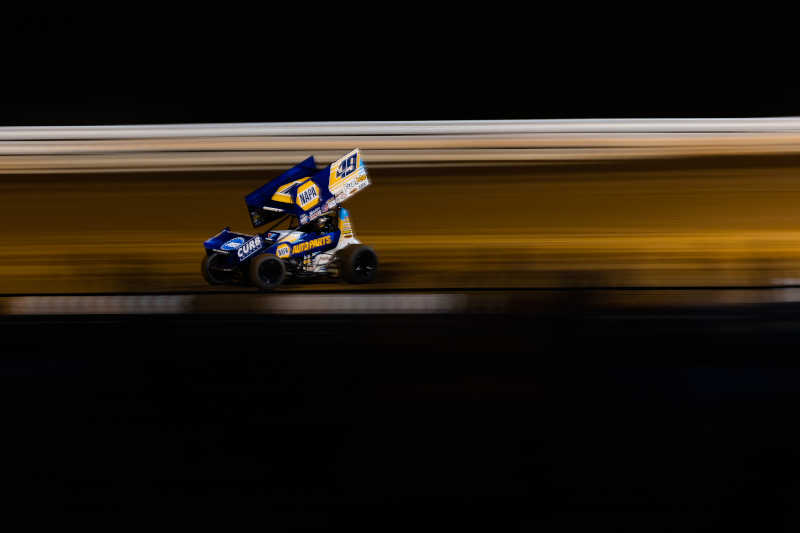 Next up was the 30-lap A-main event for $20,000 to win. Sweet felt the car setup was pretty well and only made a few minor adjustments. The Big Cat had 53 starts at Williams Grove Speedway but has never conquered the track. When the green flag dropped, Sweet got off to a slow start, falling back to fifth. As the field came around to complete the first lap, Sweet charged back to third, proving the NAPA car had the right setup. The field was fast and began to stretch out. Closing in on second-place Donny Schatz, Sweet waited for his moment. On lap 8, Schatz went high and Sweet went low. The NAPA No. 49 pulled ahead to claim second. With nearly two seconds separating Sweet from leader Sheldon Haudenschild, the Big Cat closed in. With three laps to go, Sweet was just two car lengths back from the leader. Exiting turn 4, Sweet took the lead. With only two laps to go, the second-place runner struggled to catch Sweet. The NAPA AUTO PARTS No. 49 took the checkered flag, marking Sweet’s first Williams Grove victory. 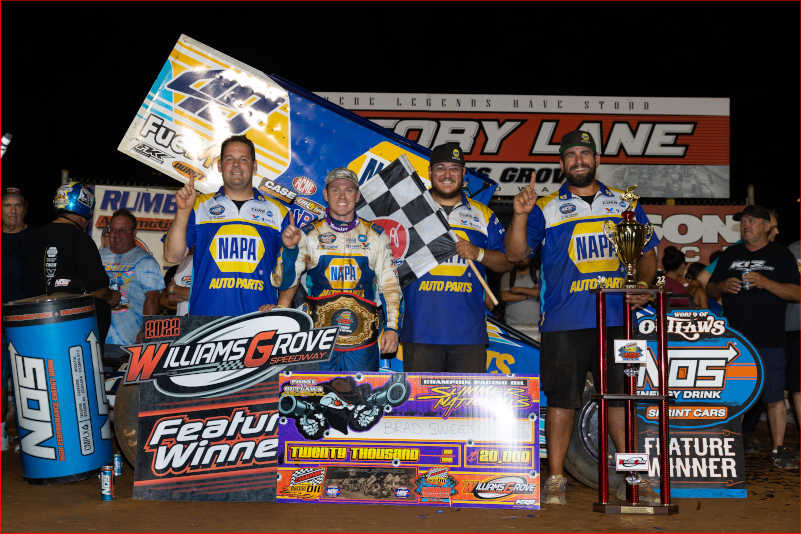 The World of Outlaws Sprint Car Series returns Saturday and Sunday for the Empire State Challenge Weekend at Weedsport Speedway in Weedsport, NY.