Not all engines are built the same, which makes the engine in your car (for getting to work) different from those powering your weed whacker and lawn mower (for doing chores) and ATV (for when you finally get a chance to play). Knowing the difference is critical, and supplying the right gas oil ratio to each engine will return years of reliable operation and, possibly, fun.

Does My Engine Need a Gas Oil Mix?

Distinguishing between a two-stroke and four-stroke is usually pretty easy. Generally, if there is a separate oil fill tube, then you have a four-stroke engine, which doesn’t require a gas oil mix. An exception to this rule would be auto-injection engines, such as those found on some two-stroke motorcycles and ATVs, which hold two-stroke oil in a separate reservoir.

On the other hand, if there is no separate oil fill tube or the fuel cap has oil and fuel icons or a specific gas oil ratio listed, this is a dead giveaway that you have a two-stroke engine and need to mix oil with the gas. Your owner’s manual will tell you exactly what kind of engine you have and what kind of fuel to put into it.

What Gas Oil Ratio Should You Use?

This, of course, depends entirely on the engine, and you should always follow manufacturer specifications. Generally, most small two-stroke engines run a gas oil ratio between 16:1 (5.9 percent oil) and 60:1 (1.6 percent oil), but some are as high as 100:1 (1 percent oil). You can find this information in the owner’s manual, on a sticker on the tank or even printed right on the fuel cap. 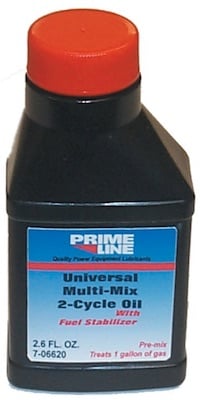 For example, weed whackers generally need a 40:1 ratio, for which you would mix 3.2 ounces of two-cycle oil per gallon of gas. But to mix oil and gas for a chainsaw, which requires a 50:1 ratio, you’ll mix 12.8 ounces of two-cycle oil per five gallons of gas. To make things even easier, you could buy pre-mix fuel, which you can just pour into the tank without worrying about measurements and possible spills. The only requirement here is to make sure the premix you buy is the correct concentration for your engine.

Remember, mix only two-cycle oil, also known as two-stroke or 2T oil, with fuel for your two-stroke engine. Regular motor oil, which is not blended to be burned, will foul your spark plugs very quickly. Also, use synthetic two-cycle oil, if the manual specifies, or spark plug fouling may result.

Check out all the chemical products available on NAPA Online or trust one of our 17,000 NAPA AutoCare locations for routine maintenance and repairs. For more information on the correct gas oil ratio for your small engines, chat with a knowledgeable expert at your local NAPA AUTO PARTS store.

NAPA Know How Blog The Right Gas Oil Ratio For Your Engine: When Do You Need It?