bulldozer is a continuous tracked tractor outfitted with a broad upright blade at its front, and is typically used for clearing ground. Although most bulldozers are employed for earth moving purposes, there have been occasions where these gargantuan machines have been used for more unique operations. To that end, we will explore the top 5 uses for bulldozers, oddity style.A 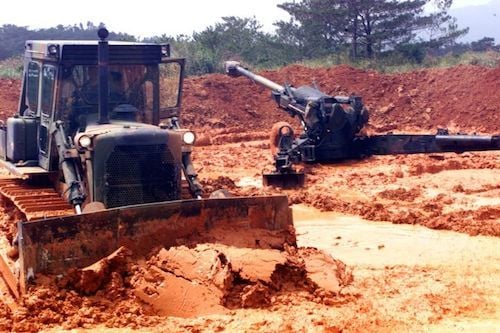 During World War II, British forces refitted Caterpillar bulldozers to aid in the war effort. The first bulldozers cleared land and filled holes to enable troops to advance to the front. These machines were fitted with armor to protect the engine and the driver. However, the bulldozers moved too slowly and impeded progress. So, the British did the next best thing — they took a fast-moving tank, removed the turret and installed a bulldozer blade to clear rubble in bombed areas. Problem solved.

One-time Houston Astros baseball pitcher Roy Oswalt has an affinity for bulldozers. So much so, the team’s owner, Drayton McLane, promised Oswalt that he would gift him with a bulldozer if he won the pivotal sixth game of the 2006 National League Championship. Indeed, Oswalt did win, sending the Astros to the World Series. McLane kept his promise as he later presented the pitcher with a brand-new Caterpillar D6N XL, with a giant red bow affixed to the top of the cab. Oswalt later used the bulldozer to clear land near his Mississippi hometown, making way for a restaurant he now owns.

3. To settle a property dispute.

We don’t recommend all possible alternative uses for bulldozers, especially when people are harmed and property is damaged. A Seattle, Washington, resident decided to settle a land dispute involving a fence line he felt was too close to his property line. In an apparent fit of rage, the homeowner fired up his bulldozer, ran over his pickup truck, knocked his home off the foundation and proceeded to go after his neighbor’s homes, destroying four. He also knocked out power to thousands in the area. The man was later tried and convicted, ordered to pay restitution and sentenced to 29 months behind bars. There is no word whether his bulldozer was sold to pay for those damages.

Just how popular is the Star Wars series around the world, anyway? In some places that popularity has taken on epic proportions. In Japan, during the 66th Annual Sapporo Snow Festival, their Ground Self-Defense Forces’ 11th Brigade demonstrated an interesting application for bulldozers, by moving more than 3,500 tons of snow into a huge pile. From that pile, a massive frozen monument paying tribute to Darth Vader and his Imperial forces was sculpted.

So far, our look at uses for bulldozers has focused on the equipment itself. Sometimes, that equipment becomes inspiration for something entirely different, as in an office building. Amazingly, that’s exactly the shape that the owners of a heavy equipment company took in the 1970s, when they planned for a new building on Route 99 in California’s Central Valley. The two-story office building resembles a Caterpillar D5 bulldozer with a plywood blade in front, which appears to be pushing a pile of dirt and rocks in the yard. The building itself is fully functional, with a reception area and offices found inside.

Check out all the lawn & garden products available on NAPA Online or trust one of our 17,000 NAPA AutoCare locations for routine maintenance and repairs. For more information on the uses for bulldozers and heavy equipment maintenance, chat with a knowledgeable expert at your local NAPA AUTO PARTS store.

NAPA Know How Blog The Top 5 Odd Uses for Bulldozers