When considering engine maintenance, it’s important to understand whether your vehicle has a timing chain vs. timing belt or timing gears. Managing the ballet of the engine’s pistons and valve timing is a matter of transferring and halving the rotary motion of the crankshaft, and transmitting it to one or more of the motor’s camshafts. To do this, engineers use timing chains, timing belts or timing gears.

For decades, overhead valve (OHV) engines used timing chains or timing gears to rotate the camshaft. Through the 1980s, timing chains powered many overhead cam (OHC) engines. Timing belts were especially common from the mid-’80s through the ’00s, but timing chains are becoming more widespread again.

Without disassembly, it can be difficult to identify what kind of timing components are in your car’s engine. In general, timing chains and timing gears are inaccessible, hidden behind sealed metal covers for lubrication. Timing belts don’t need lubrication, but do need protection, usually located behind unsealed plastic covers. This is a good rule of thumb, but the best identification is to look up timing components for your vehicle. Year, make, model, engine, transmission and drive type can mean the difference between a timing chain vs. timing belt. Why is that the case?

Why Some Cars Use a Timing Chain Vs. a Timing Belt

Why do some engines use a timing chain vs. a timing belt or timing gear? Each has its strengths and weaknesses, and automakers and engine builders balance these.

At first, automakers used timing chains and timing gears because that was all that was available. Later, timing belts came around and were found to be quieter, but problematic. Broken timing belts have damaged many interference engines due to valve crash.

Timing Chain vs. Timing Belt — Is One Better? 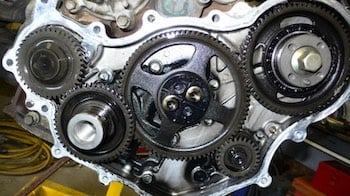 “Better” depends on what is expected of the engine. For decades, timing gears and timing chains were state-of-the-art, but noisy and heavy. Drivers demanded something quieter, and timing belts delivered. Today, drivers want longevity and regulations demand efficiency, both of which timing chains deliver. In custom applications, such as restoration or racing, engine builders balance the needs of an engine.

Check out all the belts and hoses available on NAPA Online or trust one of our 17,000 NAPA AutoCare locations for routine maintenance and repairs. For more information on replacing your timing belt or timing chain, chat with a knowledgeable expert at your local NAPA AUTO PARTS store.

NAPA Know How Blog Timing Chain Vs. Timing Belt: Why Do Cars Use One or the Other?