Stop-start technology (SST), also known as stop-start engine, auto stop-start, idle-stop or anything similar, is a feature many associate with hybrid vehicles. The key to hybrid vehicle efficiency is that it takes advantage of the opposing strengths and weaknesses of internal combustion engines (ICE) and electric motor-generators. At a stop, unless the hybrid battery needs charging, SST cuts the engine, leaving the battery pack to power lights, the radio and the air conditioning system. Vehicles with SST are sometimes referred to as mild hybrid vehicles for this reason.

One might think SST somehow seeped over to conventional vehicles, but the designers of hybrids didn’t invent stop-start technology. In fact, it was first introduced years ago, at the 1983 Frankfurt International Auto Show.

What Is Stop-Start Technology?

The ICE is a wasteful machine, converting little chemical energy to motion. Despite technological advancements in the last century, there are plenty of ways to improve the ICE. Engines are least efficient when the vehicle is stopped, as the entire motor operates to run the alternator and power the car’s electrical system. The question then becomes, “Why can’t the battery do that on its own?”

With enough battery capacity, there’s no reason to waste fuel as the engine sits idling. SST cuts the motor when the vehicle is stopped, restarting it when it needs to move again, usually triggered by the brake, the clutch or the accelerator pedal. Early SST engines were a bit clunky, but some modern ones start within 0.035 seconds, about a third of the time it takes to blink your eyes.

Pros And Cons Of Stop-Start Technology 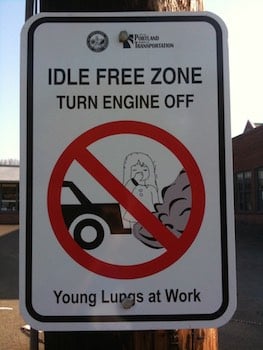 The obvious advantage of SST is the engine doesn’t burn fuel when the vehicle is stationary. This improves fuel economy in stop-and-go traffic situations, where it’s at its worst. In hot weather, though, these improvements are smaller, as SST might cancel to engage the AC compressor. Still, every bit of fuel consumption adds up, whether its 2 percent or 10 percent.

Since SST engines start more often, premature wear might be a concern. Therefore, “adding” it might be a bad idea on a vehicle that wasn’t designed for it. To handle the specific demands of SST, automakers have redesigned engines, starters and electrical systems.

The worst thing about stop-start technology might be all in your head. For drivers that are accustomed to hearing their engine running and feeling the forward creep in vehicles with automatic transmission, having the motor shut off can be unsettling. Once you get used to it, simply enjoy the benefits of refueling just a little less often.

Check out all the electrical system products on NAPA Online or trust one of our 17,000 NAPA AutoCare locations for routine maintenance and repairs. For more information on stop-start technology, chat with a knowledgeable expert at your local NAPA AUTO PARTS store.