TOOELE, Utah (Sept. 11, 2016) – Todd Gilliland came away with a pair of runner-up finishes over the weekend as the NASCAR K&N Pro Series West held a double header on the Utah Motorsports Campus road course with back-to-back races on Saturday and Sunday.

Gilliland led the field to the white flag on Sunday and appeared headed for the win in the Bill McAnally Racing No. 16 NAPA AUTO PARTS Toyota Camry, before contact from the second-place car send him off course.

The 16-year-old rookie from Sherrills Ford, North Carolina made a quick recovery, however, to finish second. Gilliland had led four of 36 laps in finishing second on Saturday and then paced the field for 17 of 36 laps on Sunday.

His 17-year-old teammate at BMR, Riley Herbst, led 13 laps of Sunday’s race in the No. 19 NOS Energy Drink Toyota Camry – before eventually finishing fourth. It made for a pair of weekend top-five finishes for the rookie from Las Vegas, who took fifth on Saturday.

A third rookie on the BMR team, Julia Landauer, recovered from a spin in Sunday’s race to come home eighth in the No. 54 Curb Records Toyota Camry. She had scored a career-best series mark, with a fourth-place finish on Saturday.

The fortunes of two other BMR drivers were not as good, as defending series champion Chris Eggleston in the No. 50 NAPA Filters / H2O Fire Protection Toyota Camry and Cole Moore in the No. 20 JM Environmental/YP Toyota Camry encountered mechanical trouble both days.

With his two second-place finishes, Gilliland extended his lead in the championship standings to 13 points. He has five wins, 10 top-five, and 11 top-10 finishes in 12 series starts this season. In addition to leading the overall standings, he tops the freshman class in the chase for the rookie title.

Herbst has climbed to fifth in the overall standings and second in rookie points. He has seven top-five and 10 top-10 finishes in 12 career series starts this year.

Landauer, a 24-year-old New York native, is sixth in the overall standings and third in the rookie standings. She has five top-five and 11 top-10 finishes in 12 career series starts this year.

Eggleston will be looking to battle back in points as the season winds down, after slipping to seventh in the standings – with finishes of 21st on Saturday and 19th on Sunday. The Erie, Colorado driver has two wins, seven top-five, and eight top-10 finishes in 12 series starts this season.

Moore – a 19-year-old from Granite Bay, California who is gaining series experience in racing select events on this year’s schedule – finished 18th on Saturday and 17th on Sunday. 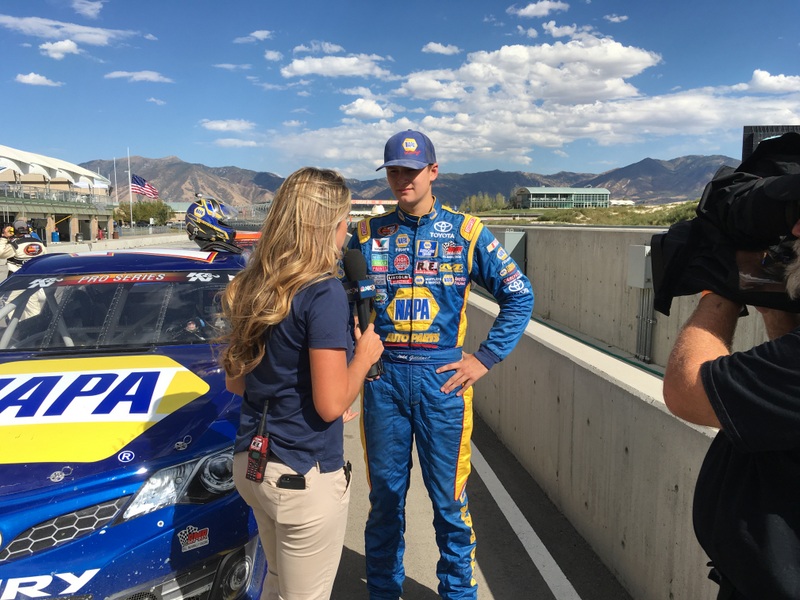 The back-to-back Utah events, which were both won by Noah Gragson, made up the first doubleheader weekend in the modern history of the NASCAR K&N Pro Series West. It marked a return to the massive motorsports facility west of Salt Lake City after a one-year absence.

The races, contested on the track’s 3.048-mile outer course, were the second and third road course events of the season, and the 11th and 12th events overall on a 14-race schedule. The track hosted eight series races between 2007 and 2014, when it was known as Miller Motorsports Park.

The Utah events will be televised back-to-back on NBCSN on Sept. 17, beginning at 6 p.m. PT.

The next race on the series schedule will be at Meridian (Idaho) Speedway on Sept. 24.