Certainly, automotive technology can help save lives, but there are limits to its capacity to protect you and your passengers. Knowing how systems like ESC work helps you understand how they contribute to improved automotive safety, and why you should rely on smart behavior behind the wheel, even if your vehicle has the latest safety technology.

Integrated with antilock brakes (ABS), traction control was introduced on production vehicles decades ago and is a precursor to ESC. It senses wheel spin at individual wheels and reduces throttle and/or applies brakes to individual wheels to better maintain traction at all four wheels. Over the last few years advanced driver-assistance systems (ADAS) have become more common on even base model vehicles. Features like automatic emergency braking, lane-keeping assistance, blind spot monitoring, adaptive cruise control, and more help keep drivers not only aware of what is around them but can also control the vehicle itself. Just like how ABS can pump the brakes much faster than any human could, ADAS can react far faster than the driver ever could in an emergency. 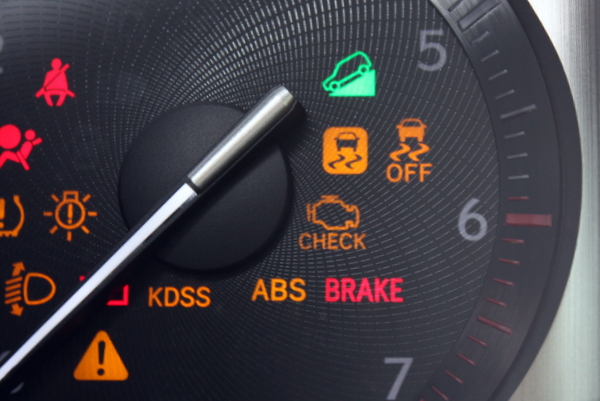 The term “traction control” is sometimes used interchangeably with ESC, but the latter is a more sophisticated system and is now more common. Buick created a primitive version of traction control in the early 1970s called MaxTrac that reduced engine output so that the rear wheels could regain traction. Premium automakers have offered the technology since the 1990s, and GM’s StabiliTrak and Ford’s AdvanceTrac systems are examples of early ESC systems from mainstream domestic automakers. As previously mentioned starting with the 2012 model year, all new cars and light trucks are required to include ESC as standard safety equipment. While many automakers bundle traction control with ESC, it is not required.

Traction control shines in slippery conditions such as rain, snow, ice and mud. For the drive wheels if a wheel begins to slip, the natural operation of the differential will cause the wheel without traction to spin faster while robbing the wheel with grip of power. Traction control can stop that wheel slipping and get the power to the gripping wheel, usually through an active differential. In situations like accelerating away from a red light in the rain, if both drive wheels begin to slip the onboard computers can actually reduce throttle (and thus engine power output) to give the tires a chance to find grip again.

Traction control can’t reverse the laws of physics. Slipping on ice means there is zero grip available for any of the tires, so there isn’t much the system can do. If you are stuck in ice, snow or mud there are times when it is preferred to let the tires spin until they find traction. Or to allow the vehicle to be rocked back and forth to build momentum. For times like this most automobile manufacturers include a traction control disabling button (refer to your owner’s manual for location). Traction control isn’t always able to control high horsepower vehicles where a lot can happen very quickly in a very short span of roadway. Road conditions such as surface smoothness, loose dirt/gravel, and roadway material itself can also affect how well traction control works.

The big difference between ESC and traction control is that ESC is designed to aid in steering. Like traction control, it uses wheel speed sensors to indicate loss of traction and can limit throttle and/or apply brakes to prevent the driver from losing control of the vehicle. ESC takes it a step further by measuring the angle of the steering wheel and responding with brake inputs accordingly, helping the vehicle to stay on the driver’s intended path.

ESC can be effective, for example, if you swerve at the last minute to avoid a squirrel darting across a warm, dry street. Without touching the brake pedal, ESC uses the braking system to keep your car from sliding, either plowing forward or spinning out. Add standing water – or, worse yet, icy pavement – and the system’s ability to protect you is reduced. ESC is not magic; it relies on the traction of the tires to help you maintain control. If no traction is available due to conditions like icy roads, ESC can do little to help you maintain control.

One place that has seen a rise in creative traction control use is at the race track. Maintaining contact with the race track surface without tire slippage is a difficult challenge. Too much engine power and the tires break loose, while too little engine power means wasted opportunity. Traction control allows the race car to go right up to the edge of traction far more precisely than a human could control. It can also help in corners by helping to prevent understeer/oversteer. Braking can be applied to a single wheel automatically to keep the race car firmly planted through the corner.

To get the most of your vehicle’s safety system, drive smart. Slow down and leave plenty of space. Drop the distractions and pay attention to the road. And even in the newest car with the most advance safety features, take extra precautions in harsh weather. Modern safety systems are most effective in the hands of wise, careful drivers.

Check out all the relays, sensors and switches available on NAPAOnline or trust one of our 17,000 NAPA AutoCare locations for routine maintenance and repairs. For more information on traction control, chat with a knowledgeable expert at your local NAPA Auto Parts store.

NAPA Know How Blog Traction Control: When It Can–and Cannot–Save Your Life