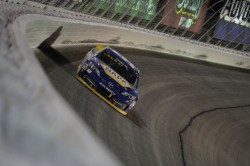 The Michael Waltrip Racing driver qualified seventh and raced with a cast on his right wrist after suffering a scaphoid fracture and sprain during last week’s race at Bristol.

In the first half of the 325-lap event, the NAPA driver battled a tight-handling Toyota and a lack of front grip. A series of adjustments kept Truex running well within the top 10.

Then at lap 210, the NAPA KNOW HOW team rallied back from a lug nut stuck in the lug nut guard to drive from 18th to 10th during a long green-flag sequence.

With 21 laps to go and on the final restart, Truex went door-to-door with Kyle Busch for the lead before falling back to third. 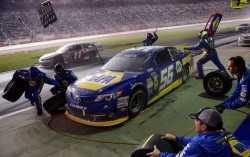 “It was a good battle, that’s for sure,” said Truex. “We really needed to win this thing to be honest with you. I really wanted to win it. As bad as my wrist was hurting and as bad as the car was for a lot of the race, I was pretty excited there at the end. I felt like I was giving it more than I maybe could have or had before. We just came up a little bit short. We had a great restart there on Kyle (Busch) and almost had him cleared. We were just too tight all night long. Chad (Johnston, crew chief) made a few adjustments to it and we just kept our head down and we kept digging and had some good restarts. We were able to make it up there – we just didn’t have quite enough at the end to get by Kyle (Busch). Even if we could have cleared him, I’m not sure I could have held him off. The car got really tight at the end again. It was a good night. It could always be better. It could always be worse too. I am proud that we were able to fight through it tonight. I was in pretty large amounts of pain there tonight. So, glad it’s over with.”

Truex is 13th in the point standings and holds the second wild card position with one race remaining before the start of the 10-race Chase for the Sprint Cup. The NAPA team returns to action Saturday at Richmond International Raceway.