Capps leaves U.S. Nationals for 18th time without a title but locks up No. 2 seed in NHRA Countdown to the Championship 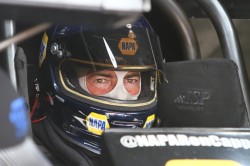 BROWNSBURG, Ind. (Sept. 2, 2013) – Ron Capps’ love for the NHRA U.S. Nationals has not waned even after he missed making it to the championship round on Monday for the 18th time.

Capps qualified No. 5 at Lucas Oil Raceway near Indianapolis but still has not advanced to the final round of drag racing’s biggest and most prestigious event. He lost in the second round when his NAPA AUTO PARTS Dodge Charger R/T lost traction to end his hopes of advancing to the final round.

“It’s Indy,” he said. “When Tim Richards was my crew chief he told me you win Indy when Indy decides it’s time for you to win Indy.” 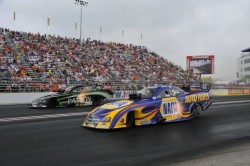 But it was far from woe for Capps, crew chief Rahn Tobler, assistant John Collins and the NAPA team because they clinched the No. 2 seed for the six-event NHRA Countdown to the Championship playoff that begins Sept. 13 near Charlotte for the top-10 drivers in each of four Mello Yello Series professional categories.

When the 18-event regular season ended Monday, points standings were reset at 10-point increments with Capps’ DSR teammate Matt Hagan earning the top seed and a 20-point bonus as the regular season champ to start the Countdown with a 30-point lead over Capps.

“The competitive nature of Funny Car is so close that we could have dropped four spots today and that would have been 40 more points we’d have had to make up in the Countdown,” said Capps, who owns 41 NHRA event titles including three this season.

“We knew we couldn’t catch Matt and we really wanted to at least be second going into the Countdown. We lost the championship by two points last year (to DSR teammate Jack Beckman) so 10 points is a lot. We realize how important points are.

“I was in our NAPA Dodge getting ready to do the burnout for the second round looking at all the people in the grandstands. I was thinking about the events that go along with Indy and the anxiety that comes with it. 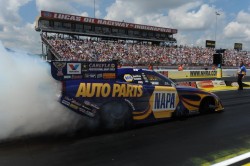 “That helped us to start getting mentally ready for the Countdown. We could have 48 runs during the Countdown and there are a lot of points up for grabs. There will be pressure every single run whether it’s qualifying or eliminations. Every run will feel like they did today at Indy.

“I love that. We have a great race car and we’re hitting our stride. It’s going to be a lot of fun.”