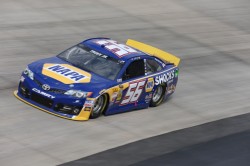 The NAPA driver started 10th but shortly into the 400-lap event reported an extremely loose-handling Toyota. Despite major chassis adjustments, the Michael Waltrip Racing driver lost a lap to the leader on lap 145, but remained in position to earn the lap back.

By halfway, the NAPA Shocks Toyota was turning top-10 lap times and in need of a break. Unfortunately long green-flag runs prevented the NAPA crew from racing back onto the lead lap.

The big gains in the NAPA Toyota’s handling earned the team a top-15 finish. The NAPA team returns to action Sunday at Kansas Speedway. 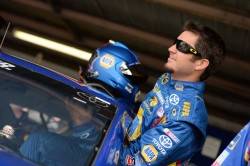 “Chad took a real chance today with our set up and I am proud of him for it,” said Truex. “We had nothing to lose and everything to gain. Sometimes you have to think outside the box. Unfortunately it wasn’t quite right and a long green-flag run cost us a lap. But we fought back with some really big changes and got us in position for two chances to get our lap back but it just didn’t happen for us. It’s a shame because we were turning top-five, top-10 times. Chad did a great job adjusting on our NAPA Shocks Toyota. It was at least a top-10 car from halfway on. We made a lot of progress. If we would have gotten our lap back, we would have had something for them.”