Capps disappointed with second-round loss at Gateway that hampers chance for NAPA Dodge Shocks and Struts team to win championship. 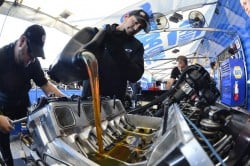 MADISON, Ill. (Sept. 29, 2013) – It wasn’t what Ron Capps and his NAPA Dodge Shocks & Struts team wanted and certainly not what they needed Sunday in the AAA Insurance Midwest NHRA Nationals at Gateway Motorsports Park near St. Louis.

The NAPA team lost to John Force in the second round of championship eliminations but remained sixth in the NHRA Countdown to the Championship standings with only three events remaining in six-race playoff.

After winning in the first round under beautiful and ideal racing conditions, Capps, who qualified sixth, lost to Force, whose quicker run in the opening round afforded him choice of lanes and the 15-time champion opted for the preferred left lane. 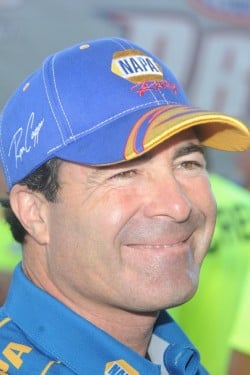 After finishing the 18-race regular season and starting the Countdown ranked second, Capps has lost in the second round twice and first round once in the playoffs. Fortunately for Capps, his chances at the championship weren’t destroyed because Don Schumacher Racing teammate and points leader Matt Hagan lost in the second round at Gateway marking the second event when he did not advance to the semifinals.

Capps will head to the Maple Grove Raceway at Reading, Pa., on Friday trailing Hagan by 111 points.

“We have to win the next three races, and I know (crew chief Rahn) Tobler and our NAPA team can do it,” Capps said.

The following are Capps’ results and notes from Gateway Motorsports Park:

NHRA COUNTDOWN TO THE CHAMPIONSHIP STANDINGS
(Unofficial through Sept. 29 near St. Louis; DSR drivers in CAPS)