Oil life percentage is one of those readouts on a modern automobile that isn’t always so easy to understand. From a big picture perspective, it represents the amount of time left before the oil in your engine no longer offers optimal protection of its internal components. The way this is calculated is fascinating. It’s based on a balance of simple time and mileage, but also more complex considerations involving your driving habits, the environment surrounding the vehicle and the oil itself.

Not Just Mileage Based

Once upon a time, engine oil was formulated in a very simple manner, and automobile engines were built to looser tolerances. This meant that it was possible to get away with general rules of thumb for maintenance schedules, with shorter periods between fluid replacements, offering better protection against breakdowns. The “3,000 mile oil change” hails from this particular era, and it’s a number that’s become ingrained in the folk wisdom that surrounds automotive maintenance. There’s no real downside to changing your oil every 3,000 miles, you just may not be getting the full service life from your oil.

Various versions of an oil life calculator have been in use by automakers for decades.  At first they were seen as a gimmick and not much more. Today, engine oil contains additives, chemicals, and in some cases, lubricants created almost entirely in a lab. As a result, calculating oil life percentage is no longer as simple as measuring how many miles have been driven since the last oil change. There are a whole host of factors that play into the service life of engine oil.

First you need to know that these oil life calculating systems do not actually test the oil in any way. There is no oil quality sensor stuck to the side of the oil pan. They can’t tell directly if the oil is contaminated or worn out. They can’t measure particulate level or chemical makeup. They use data collected manufacturers over millions of miles driven to make assumptions as to what is going on with the oil. These datasets are based on known factors such as the engine itself, the specified oil that should be in the engine, and driving data. By collecting and analyzing oil samples the automakers are able to create a picture of what kind of wear and tear has happened to the oil based on various conditions. For those who want to know exactly what is going on there are actual oil analysis services available where you send off a sample of your engine oil and get a detailed breakdown of what is in it. But that’s not that is going on under your hood. 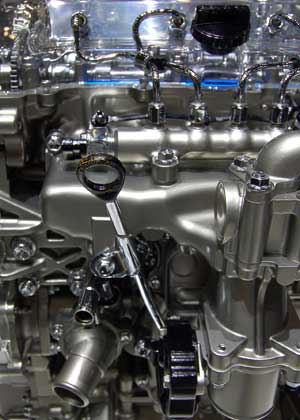 Helping the odometer (because miles traveled is still a consideration for oil life percentage) are sensors in your engine that keep track of how hot a motor has been running, as well as how hard it has been driven. More extreme driving scenarios, such as bringing your car to a race track or motoring through desert temperatures or cold winter nights, will have a greater impact on your oil life percentage because additives are depleted more quickly in these conditions.

Something your system can’t really take into account, but you should be aware of, is the effect of dirt and dust. Your engine’s air filter can’t snag it all, so some will invariably end up inside the crankcase where it will further reduce the life of your oil. If you do a lot of driving on gravel or dirt roads, you need to change your oil more often. Time also plays a role, oil changes every six months to a year are a good idea even if the vehicle has just been sitting. Condensation can form inside the engine and settle in the oil pan, which is never good.

Engine oil change intervals are all over the place these days. Your car’s manual is the most specific reference you will find regarding how often you should swap in fresh oil and a new oil filter, but typically mileage will range between 5,000 miles at the very low end for the hottest and dirtiest of driving environments all the way to 15,000 miles for high-end synthetic oil blends. The manual will likely list normal and severe service oil change intervals. You may think severe service means heavy towing or hitting the race track, but city driving with stop-and-go traffic on a regular basis is harder on an engine than steading cruising speed. Traveling 10 miles on the highway with no stops is way easier on engine oil life than 10 miles of constant accelerating and decelerating. When dealing with oil change intervals always err on the side of changing oil sooner than later.

Not A Complete Solution

Make no mistake, despite recent advances, checking and changing your oil is still is a critical issue for your car. Some vehicles have an oil level sensor, but not all. If you have an oil leak you may still have life left in the oil but risk running low and damaging the engine. Likewise if you put the wrong fluid in the engine an oil life monitor won’t know it. Accidently pouring antifreeze into the oil filler won’t change the calculations made by the system, but it will damage the engine. It also can’t tell if a blown cylinder head gasket has started leaking coolant into the oiling system. These conditions all still depend on pulling the dipstick now and then and observing the oil that comes out of the engine.

Remain vigilant and follow your manual and you’ll be sure to keep that engine humming for years to come.

Check out all the maintenance parts available on NAPA Online or trust one of our 17,000 NAPA AutoCare locations for routine maintenance and repairs. For more information on motor oil, chat with a knowledgeable expert at your local NAPA AUTO PARTS store.

Looking for a deal? Click here to check out what essential car maintenance products are on sale this month at NAPA.