When it comes to driving on snow tires, for whatever reasons, many drivers believe it’s enough to put two snow tires on the drive wheels only. The thinking is basically this: If the drive wheels have the best traction, then you won’t get stuck. In certain cases, this is true. What if you’re trying to power your way through the snow bank the plow truck so graciously left across your driveway entrance? If you are installing snow tires on your drive wheels, then what use would snow tires be on the other axle in this situation? Your snow tires are going to power you through and those other tires are just along for the ride, and that is exactly where the benefits of using only two snow tires end. 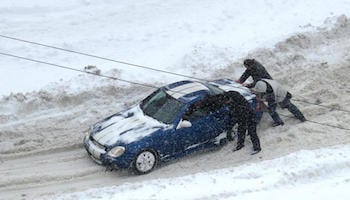