Camshaft and crankshaft sensors monitor the position of the engine’s crankshaft and camshaft by generating an electrical signal based on the position of the trigger wheel (variable reluctance sensor) or metal rotor (Hall effect sensor). This information is used by the ignition control module and/or the engine control computer for the sequencing of ignition timing and fuel injector timing.

Where are these sensors located?

What are the different types of camshaft and crankshaft sensors?

Hall effect sensors are most commonly used in automotive applications for measuring the speed of a rotating object, such as a wheel, crankshaft, or camshaft. Hall effect sensors are chosen for their accuracy across the entire speed range, along with their resistance to dirt, mud, water, and rust. These are constructed of a stationary permanent magnet and semiconductor which contains an analog to digital (A/D) signal inverter. The A/D inverter produces the square wave electrical signal which is interpreted by the vehicle’s electronic controls to determine the position of the engine’s camshaft or crankshaft. 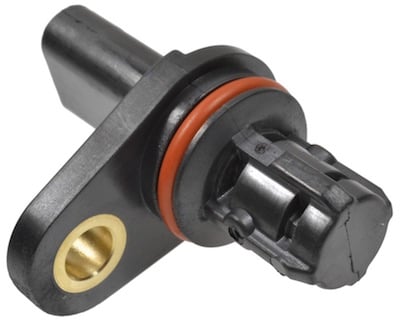 A variable reluctance sensor is an analog signal generating sensor that is comprised of a permanent magnet and a pole piece. As the metal cog of the tone ring or reluctor wheel passes the tip of the sensor, a signal is generated and it drops as the cog moves away. The signal strength increases with the speed and proximity of the sensor to the tone ring.

A magnetoresistive sensor is a device that uses a magnetic field to transform mechanical motion into an electrical signal. It requires a power source to operate. This type of sensor is found in CMP, CKP, ABS,and steering wheel speed sensors due to its increased accuracy and resistance to electromagnetic interference (EMI).

Potential symptoms of a failed camshaft or crankshaft sensor

TIP – Chrysler engines require very precise crankshaft position sensor (CKP) and camshaft position sensor (CMP) synchronization. A lack of proper synchrony will lead to a variety of engine performance symptoms. The CMP and CKP Synch data PIDs can mislead you so the best way to check the alignment of the sensors is with a dual trace lab scope. On engines prior to Next Generation Controller (4 plug PCM) the rule of thumb is that the CMP pulses should fall between the CKP pulses.

Check out all the electrical parts available on NAPA Online or trust one of our 17,000 NAPA AutoCare locations for routine maintenance and repairs. For more information on camshaft and crankshaft sensors, chat with a knowledgeable expert at your local NAPA AUTO PARTS store.

NAPA Know How Blog What Are Camshaft and Crankshaft Sensors?