Automotive audio systems have progressed to the point where a 6-speaker package is standard fare in most new models. Even so, upgrades to some of the world’s finest systems from Bose, Bowers & Wilkins, Harman Kardon, and Bang & Olufsen are within reach, including in some mainstream models. Aftermarket upgrading remains popular for people seeking improvements in sound quality, and some upgrades can enable audio systems to rival some of the best system options out there.

But what are ohms in speakers? To answer this question, we’ll need to define three other elements: amps, volts, and watts.

When discussing the flow of electricity (or the movement of electrons), amps, ohms, volts and watts go together inseparably. These units of measurement are entwined in electric relationships laid out in Ohm’s Law and Watt’s Law. 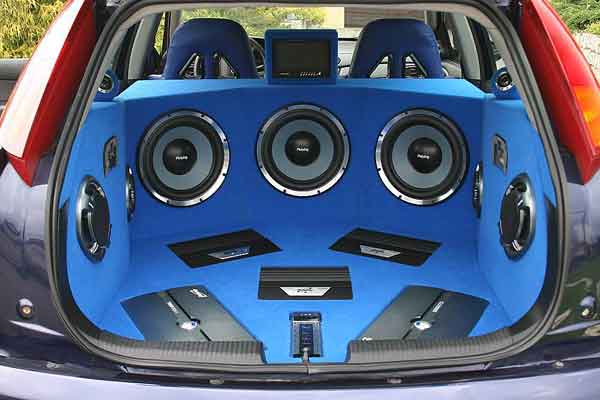 Volts measure the electrical potential of the circuit. For instance, your wall outlet makes 120 volts available, while your car audio system typically relies on the battery’s 12-volt or 48-volt system for output.

Watts measure electrical power. They’re frequently used to measure the output potential of speakers, but that doesn’t mean a system is more effective simply because it has a higher wattage.

Now that we’ve discussed the four key elements of electricity, we can examine the two laws that govern electrical relationships. From there, we can drill down to describe what ohms are in speakers.

Under Ohm’s law, we know that ohms are equal to volts divided by amps. This is calculated as Voltage (E) = Current (I) multiplied by resistance (R), or E=IR. In short, Ohm’s law describes how current flows through resistance when a different electric potential is applied to each end of the resistance.

On the other hand, Watt’s law shows us how power is dissipated. Wattage is calculated by multiplying volts by amps. Combining Watt’s Law with Ohm’s Law helps us measure the amount of work that can be done with circuits, including circuits for vehicles’ audio systems.

What Do Ohms in Speakers Measure?

Ohm’s Law is used regularly in car audio installation to determine power input and output. The connection between the amplifiers and the speakers is accomplished with either parallel wiring or series wiring. With parallel wiring, the connecting components share the same voltage. With series wiring, the connecting components share the same current. Car speakers typically have an impedance (resistance) rating of 4 ohms, 8 ohms or 16 ohms.

While the four main elements of electricity are important to understand, when it comes to wiring, getting your installation right is all about the ohms. Having the right equipment with the right connection is critically important. When you carefully monitor your ohms in each connection and make sure they’re set up to avoid damaging your equipment, you’ll have an aftermarket audio system that meets your sound expectations instead of a problem that needs to be solved.

Check out all the electrical system products available on NAPA Online, or trust one of our 17,000 NAPA AutoCare locations for routine maintenance and repairs. For more information on what are ohms in speakers, chat with a knowledgeable expert at your local NAPA AUTO PARTS store.

NAPA Know How Blog What Are Ohms in Speakers?