What does ABS mean on a car? An anti-lock brake system, or ABS, keeps your wheels from locking during extreme braking. In an emergency, this safety feature helps you maintain control of your car. But do all cars have ABS? Read on to learn the history and working principles of ABS.

The History of ABS

First let’s define the acronym of ABS meaning on car braking systems. Simply put ABS stands for: Anti-lock Brake System. When the braking force is applied to a wheel it is possible for the grip of the brakes to exceed the grip of the tire contact with the road. When this happens the wheel “locks up” and stops spinning. While this may sound like a good thing because a stopped wheel is better than a turning wheel if you want to slow down quickly, it is in fact not a good thing for vehicle control. If the wheel has stopped spinning but the vehicle is still moving, the tire is now skidding on the road and not able to influence the direction of vehicle travel.

ABS technology first emerged in the 1920s when aircraft engineers sought to apply automatic override braking to their planes. Notably, ABS was designed to prevent aircraft wheels from locking during sudden deceleration. A locked up wheel on an airplane during landing could throw the plane into a skid, which could lead to a very dangerous situation.

By the 1950s, the technology appeared on motorcycles, and by the 1960s, it had migrated to high-end cars like the Jensen FF. It wasn’t until the 1990s when ABS, along with traction control systems, became a common option on many car models. In 2013, ABS was federally mandated, and all new passenger vehicles were required to include ABS.

How do you know if your vehicle has ABS? If your car was built during the 2013 model year or later, then it does. If your car was manufactured prior to 2013, consult your owner’s manual. You can also observe your dash warning lights during startup. If you have ABS you may see an “ABS” warning light.

How Does ABS Work?

ABS is integrated into the normal hydraulics braking system, but with a few extra pieces. An ABS uses an array of valves and pumps as well as sensors mounted on each wheel to control tire grip and monitor brake pressure during hard braking. Older drivers may remember being taught to pump the brakes during an emergency stopping situations. Pumping the brake lets the wheel continue to spin while also scrubbing speed. Your ABS is able to pump the brakes far faster than any human driver allowing for greater vehicle control.

Here’s an example of a practical application of an ABS:

Advantages and Disadvantages of ABS 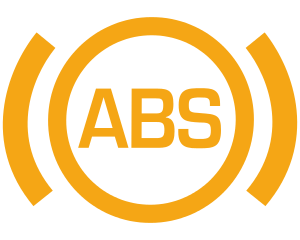 An ABS is intended to bring your vehicle to a quick stop, not only on dry roads but also on slippery ones, including those with ice. Typically cars equipped with ABS benefit from lower insurance costs and higher resale value. Insurers embrace them and consumers value the technology. Since ABS prevents the wheels from locking up, it also prevents causing flat spots on the tires from skidding during a hard stop.

On the other hand, there are a few disadvantages of ABS. For example, they add cost to a new vehicle and are expensive to maintain. Each sensor costs hundreds of dollars to fix if it falls out of calibration. Other disadvantages include longer braking lengths under certain circumstances. Also, a clunking accompanies hard braking and ABS activation, and this could cause the driver to release the brake before the vehicle stops. It may also lull a driver into a false sense of security by not slowing down during bad driving conditions. While ABS does help control stopping, physics can still take over and cause the vehicle to spin out of control on a slippery road.

Your Safety and Ours

ABS prevents accidents and saves lives. However, like other vehicle safety technologies, it’s no substitute for defensive and alert driving. Try activating your ABS in an empty lot so you can see firsthand how it functions and appreciate how well it performs. You should feel a pulsating sensation through the brake pedal which signals that the system is working.

Check out all the brake system products available on NAPAOnline, or trust one of our 17,000 NAPA AutoCare locations for routine maintenance and repairs. For more information on ABS car meaning and parts for anti-lock brake systems, chat with a knowledgeable expert at your local NAPA Auto Parts store.

NAPA Know How Blog What Does ABS Mean on a Car?