During the course of normal operation, engines produce a lot of heat. Every manufacturer must contend with this fact, and over the years, many have tried their hand at producing innovative systems to deal with the issue. The most common systems found in passenger vehicles today are water-cooled, but the air-cooled engine was a real contender for some time, and it lives on in a few select vehicles and hearts where it enjoys an almost cult-like following. 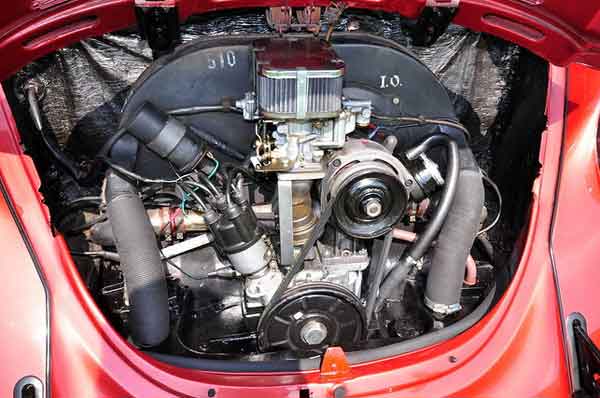 Water-cooled engines use coolant flow to dissipate heat and keep your engine cool. Properly maintained motor oil helps with this as well. A water pump pressurizes the system, pushing coolant through hoses when a thermostat senses heat and opens up. The coolant flows over the water jackets surrounding heat-generating pistons, as well as throughout the engine block, picking up the heat produced there and carrying it to the radiator.

Once this reaches the radiator, its surface area increases, and air passes over the fins of the radiator, cooling the fluid before returning it to the pump to be recirculated through the system. If there is a request for heat in the passenger compartment, heat from the coolant flowing through the heater core (essentially a small radiator, placed on the other side of the firewall) is blown in through the vents.

An air-cooled system uses some similar theories of heat transfer, but it operates differently. With air-cooled engines, a large fan sits atop the engine block and blows air directly onto the engine itself. Instead of the radiator, fins enabling faster heat dispersal are built directly into the engine head and around the pistons. These pull heat away from the hot components and allow the air coming in from the fan to push it away.

The air is routed down to the bottom of the vehicle and through passageways that can be tapped for passenger heat, serving the same purpose as the heater core. All of this takes place without liquid, a pump, a thermostat or hoses, which makes the engine lighter, arguably less complicated and less prone to leaking.

The End of an Air-a

Air-cooled systems may sound like they have some appealing qualities, but the last well-known manufacturer to produce a model with an air-cooled engine was Volkswagen with its Beetle, which was produced in some countries until 2003. There are a few reasons for this. First of all, air cooling gives the engine a much broader operating temperature, making it more unwieldy to control where emissions are concerned.

Secondly, air-cooled offerings simply can’t perform at the same level as the competition and remain cost-effective. Air-cooled engines can only produce so much horsepower before they risk overheating, and their water-cooled counterparts can tolerate more. Manufacturers looking to comply with environmental regulations and not spend to the point where they out-price themselves in the market have transitioned to water-cooled engines in order to tick all the boxes and remain viable competitors.

Air-cooled engines are still used on planes and some motorcycles, being better suited to those applications, but for passenger vehicles, they’re by and large a matter of nostalgia now. However, with near-constant innovation in the field of auto design, maybe someday the industry will see the return of air-cooled engines.

Check out all the coolant and cooling system accessories available on NAPA Online, or trust one of our 17,000 NAPA AutoCare locations for routine maintenance and repairs. For more information on an air-cooled engine, chat with a knowledgeable expert at your local NAPA AUTO PARTS store.

NAPA Know How Blog What is an Air-Cooled Engine?